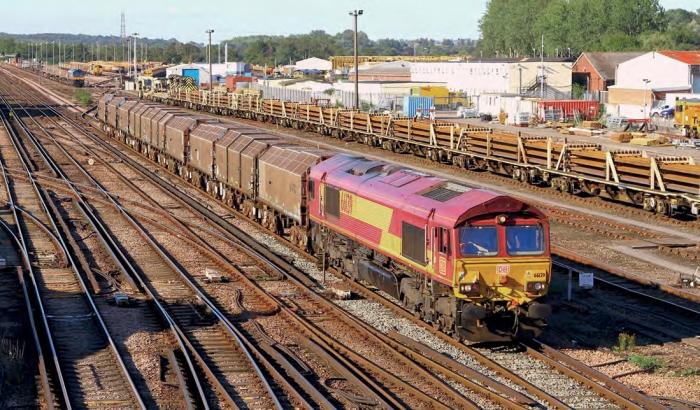 Action at Eastleigh: a train of rails stands in the background on 23 August 2019 while loco No 66139 arrives from Didcot with a rake of nine VTG-branded JSA telescopic steel hoods for conversion in the Eastleigh Arlington railway plant. The work sees the hoods removed to speed up loading and unloading, with the resulting open wagons limited to inter-works movements of hot-rolled steel coil (finished cold-rolled steel needs the hoods as it requires protection from the elements). This was the third batch of wagons to be moved to the Hampshire-based works for conversion in the last 18 months.
Steve Stubbs

DB CARGO is working with Austrian rail manufacturer voestalpine Schienen to bring 108-metre-long lengths of rail to the UK for use by Network Rail.

Test deliveries have been conducted, beginning in Leoben Donawitz, about an hour north-west of Graz, from where they have continued through Calais and the Channel Tunnel to Eastleigh under DBC’s direction. The first tests were successful, and others will follow in the coming months. Regular deliveries at three-week intervals would then begin in April 2020. The length of the rails means they stretch across six freight wagons, so the radius of curves along the route was checked.