BUT STILL PAN DOWN IN THE SEVERN TUNNEL

THE FIRST main line electric service in Wales began on 5 January, following completion of electrification in the Cardiff area. However, Great Western Railway’s bi-mode trains continue to use diesel power through the Severn Tunnel.

The westernmost extremity of the Great Western Electrification Programme, since the cancellation of the Cardiff to Swansea component, was energised after a blockade at Cardiff and Newport from 24 December to 2 January. Following final testing, GWR began to operate its London Paddington to South Wales services electrically between the Severn Tunnel and Cardiff Central. A Class 800 unit diagrammed to work between Cardiff and Taunton on Saturdays can also use the overhead line equipment (OLE). 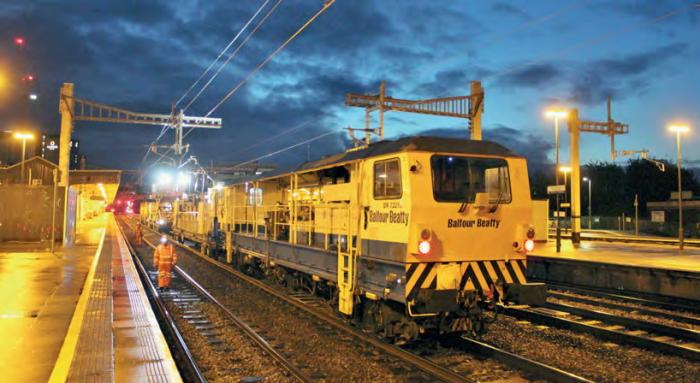 Wires up: a Balfour Beatty electrification train installing OLE on the up main at Cardiff Central on 20 October 2019.
Martin Turner

The blockade for commissioning of OLE over the eastern approach to Cardiff was also used to replace track at the east end of Newport station, where some of the OLE was adjusted and the edges of the three historic platforms were renewed.

OLE was installed in the Severn Tunnel in summer 2016 but requires remedial work before energisation. ‘We are currently looking for a long-term solution to energising the tunnel,’ said a Network Rail spokesman. ‘Currently, electric-running trains need to pan down going through.’

The situation precludes operation of electric-only trains between England and Wales, including the planned use of Thames Valley EMUs for additional capacity when major events are held in Cardiff.