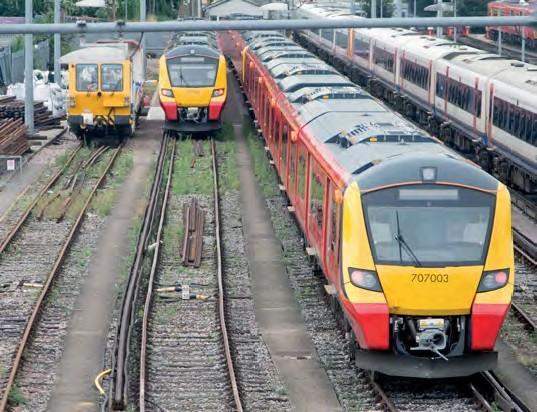 The Siemens-built units had made a brief passenger debut on 17 August in the final week of the South West Trains franchise, operated by Stagecoach, but the first full booked diagrams were not added by SWR until after the completion of the major engineering works at Waterloo. The ‘707s’ were originally planned to enter service in mid-April, but a range of issues encountered during mileage accumulation runs are understood to have caused the delay.

The £210 million fleet, financed by Angel Trains, was ordered to boost capacity on suburban routes. The units will be allocated to Windsor to London services, enabling Class 458/5s to transfer to Reading services, in turn releasing Class 450s for main line duties. The internal cascade was part of SWT’s plan to lengthen suburban services to 10 carriages. However, SWR will be replacing the ‘707s’ and other suburban fleets with Class 701 Bombardier Aventra EMUs by 2020. The new franchisee has confirmed it still plans to introduce the ‘707’ fleet to provide an initial capacity boost, even though the units will not remain with the operator in the longer term.