A pair of the Bombardier-built units made a brief debut on 24 February before a formal introduction on 3 March. Software issues have plagued the Aventra fleet, with the latest development following progress with software upgrades enabling the four-car ‘710s’ to operate in pairs as eight-car formations.

Transport for London has a total of 54 ‘710s’ on order from Bombardier. Dual-voltage units entered service last year on the Gospel Oak to Barking (GOBLIN) and Euston to Watford routes, with 30x4-car AC-only sets ordered for West Anglia services, although two of these have been in use on the GOBLIN route operating singly as four-cars. Benefits of the new trains include increased capacity, air-conditioning, free Wi-Fi, real-time information screens, USB charging points and more wheelchair spaces. 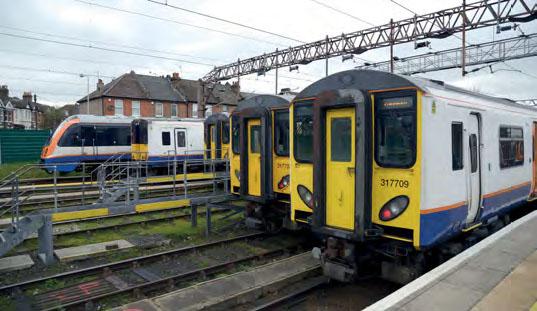 At the time of the launch, TfL had accepted two units for West Anglia services, which began working a full diagram on 4 March. It expected to accept a further two units imminently with introduction of these planned for mid-March, and after a further two-week interval a pair of units is then planned to be accepted for introduction every week. Initially introduction will be in pairs, but in future some off-peak services will operate with single four-car sets. The full fleet of ‘710s’ for West Anglia is expected to be in service by the end of June.

The new trains are replacing Class 315 and 317 EMUs on West Anglia services, with some of the latter operating under a dispensation against Persons with Reduced Mobility (PRM) regulations. The priority will be removing these non-compliant units from service as ‘710s’ are introduced. Five ‘315s’ which previously worked on TfL Rail services between Liverpool Street and Shenfield have also been drafted in for West Anglia services as they do not require immediate maintenance; a further two units are in storage but are unlikely to be pressed into service. 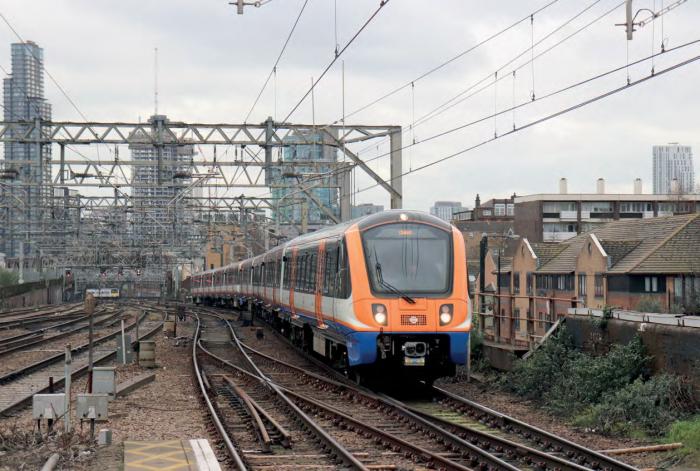 Bethnal Green bank: an eight-car Class 710 working climbs up with the 13.15 Liverpool Street to Chingford service on 3 March 2020.
Philip Sherratt

The original order for ‘710s’ comprised 45x4-car units. Of these, 30 AC-only units are for West Anglia services, 14 dual-voltage units for the GOBLIN and Watford routes and the remaining unit was ordered for the Romford to Upminster shuttle. However, TfL is now considering its options for the latter which may involve an alternative plan to using a ‘710’; a change is coming later this year for the shuttle with London Overground drivers taking over duties from drivers supplied by TfL Rail operator MTR Elizabeth Line.

Of the 14 dual-voltage sets, six are required in daily service on the GOBLIN and at least six on the Watford DC service, although at times all eight Watford DC diagrams have been covered by ‘710s’. This is dictated by availability of the older Class 378s; a refresh programme for these has now recommenced at Ilford depot, having been paused when the availability requirement for ‘378s’ rose in the wake of delays to ‘710’ introduction on the GOBLIN. The three ‘378s’ which were shortened to four cars to work on the GOBLIN last year have all been restored to full five-car length.

Nine sets were added to the ‘710’ order, taking the total number of units to 54. The extra units are 3x4-car and 6x5-car. These make provision for the GOBLIN extension to Barking Riverside while also enabling strengthening elsewhere.

TfL expects to accept its first five-car unit imminently and intends to renumber these in the ‘710/3’ series. It is hoped to introduce two five-car sets from May working peak-hour shuttles on the West London line between Clapham Junction and Shepherd’s Bush or Willesden Junction, providing a capacity increase on this busy section.

The balance of the additional units will be used on the North London line, in turn enabling a frequency increase on the East London line using cascaded ‘378s’. This uplift from 16 to 18 trains per hour (tph) at peak times is planned to be implemented in December following re-siting of some signals to draw trains into platforms more quickly and associated timetable adjustments. A further uplift to 20tph is also planned following receipt of Housing Infrastructure Fund (HIF) funding; options are currently being worked through with the aim of delivering this uplift in 2023.