A JOINT venture headed by Abellio will operate the next West Midlands franchise from December.

The operator will be partnered by East Japan Railway Company and Mitsui, marking the first time a Japanese company has been successful in a franchise bid. Abellio holds a majority 70.1% share of the venture, with the other companies equally sharing the remaining stake.

The introduction of 400 new carriages and space for an extra 85,000 passengers at peak times into Birmingham and London are among improvements promised. The venture was bidding against incumbent operator Govia, and will run the franchise until March 2026.

Abellio promises investment of nearly £1 billion, including £700 million for new and refurbished trains. Of the 400 new carriages, to be introduced by 2021, ‘more than 100’ will be EMU vehicles dedicated to the Cross City line, where they will offer a metro-style service with wider doors and more space. A further 80 diesel carriages will be for the Snow Hill lines and Birmingham to Shrewsbury services, while the remaining 225 will be EMU vehicles for West Coast main line services, which are expected to operate in five- and 10-car formations. A £70 million investment in new and existing depots is planned to improve reliability, with Abellio confirming plans for a new depot in the north Birmingham area.

It has not been confirmed which existing fleets will be retained, although the Class 150 and 153 DMUs, the oldest in the current fleet, are not expected to remain, nor are the Class 323s, which almost exclusively operate Cross City line services. Abellio says the number of carriages in the fleet will rise from 566 at the start of the franchise to 706 by 2021. 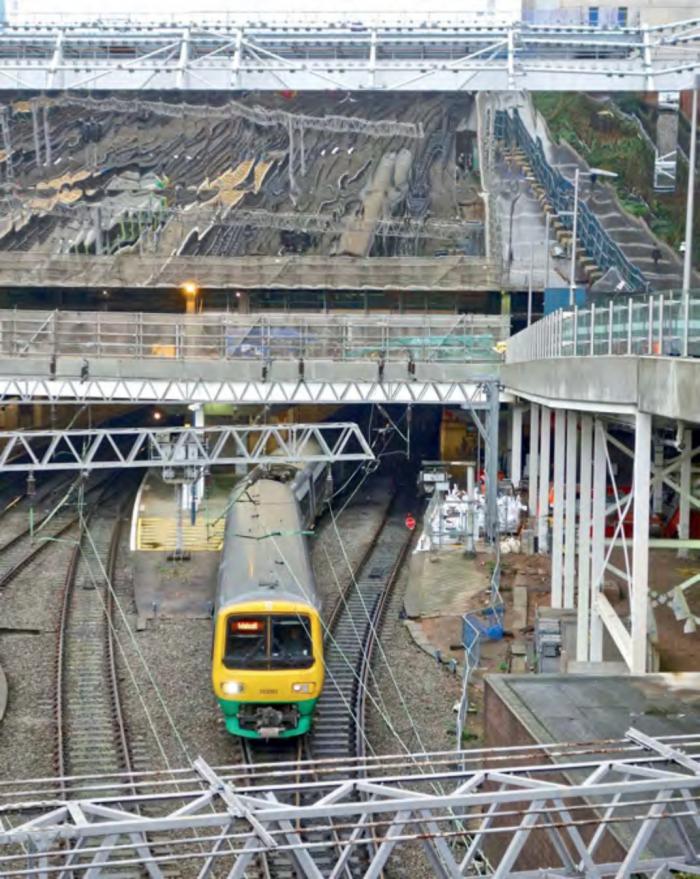 On borrowed time? Unit No 323203 leaves Birmingham New Street on a Walsall service on 27 November 2014. This class is likely to be withdrawn by the new franchisee.
John Whitehouse

Timetable improvements will take place in two phases. The December 2018 timetable will feature a capacity increase and later and earlier trains on many routes, with Abellio saying this will build the foundations prior to the introduction of the new trains. Two trains per hour from Birmingham to Shrewsbury and to Rugeley via the Chase line are planned from December 2018, the latter following completion of electrification. A new hourly service between Birmingham and Stoke-on-Trent, which will be an extension of a London to Birmingham service, will allow the London to Crewe service via the Trent Valley to be accelerated and run direct between Stafford and Crewe. Cross City line services will continue to Bromsgrove from December 2018, again following completion of electrification, and there will also be two direct morning and evening peak services between Walsall and London.

In addition to a new hourly Coventry to Leamington shuttle to serve the new station at Kenilworth, planned to be introduced in December this year, there are plans to boost services between Coventry and Nuneaton following construction of a new platform at Coventry, providing three trains per hour on Saturdays and two for the rest of the week.

The second major improvement is planned for May 2021, and as well as taking advantage of the new fleet this will include a 10% increase in Saturday services and a doubling of Sunday services.

Euston-bound service: unit No 350123 passes Dodford, Northamptonshire, with a service from Crewe on 5 April 2017. West Coast main line regional services will have a separate management structure under the new franchise.
Fraser Pithie

Free Wi-Fi will be offered on all main line services by the end of 2019, along with delay repay compensation for delays of more than 15 minutes. Mobile phone and laptop chargers will be provided on all London services by May 2021. A smart ticketing extension in the West Midlands is promised, along with a new smart card season ticket for passengers on the Northampton to Euston line and the St Albans Abbey branch.

Services running exclusively in the West Midlands travel to work area will be managed jointly by the Department for Transport and West Midlands Rail (WMR), a consortium of 16 local authorities, and will carry a local West Midlands Railway livery. The original intention was that this could eventually lead to full devolution of control of services to WMR, although Transport Secretary Chris Grayling has now ruled this out. There will be separate directors managing these services and those on the West Coast main line; the brand name for the West Coast services has not yet been decided. Abellio told Modern Railways: ‘We’ll work with the DfT on that brand and we are obliged to account for the two separate business units from day one. Over the course of the franchise they’ll begin to become more and more separate with the aim of them being let as completely separate businesses next time round.’

Closer partnership working between track and train will see these run by a ‘local team of people with a commitment to the smooth operation of their routes’. Abellio told Modern Railways: ‘As part of the bid we’ve got an alliance agreement with Network Rail to work together. Network Rail is the biggest stakeholder as it always is in these bids, we’ve got to get Network Rail to deliver on its part as we do our bit.’