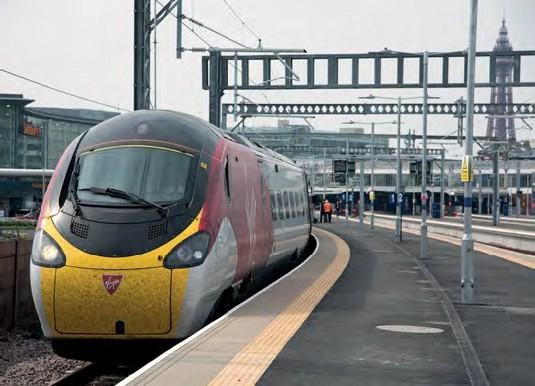 Blackpool Belle: the first Class 390 Pendolino to carry passengers to Blackpool, No 390013, was named at the resort on 21 May prior to forming the 10.53 departure to London Euston. Virgin introduced three direct electric workings to the resort from this date, which are planned to be supplemented by Alliance’s GNWR open access services from next year. Tony Miles

THE OFFICE of Rail and Road has granted approval for a new open access service between London and Blackpool operated by Alliance Rail Holdings, an Arriva subsidiary.

Alliance, under the name Great North Western Railway (GNWR), proposes to introduce four shortened 2+6 InterCity 225 sets, with an option for a fifth set, to operate the services. The additional services follow the introduction of three further direct workings between London and Blackpool by Virgin Trains from the May timetable change. Alliance originally planned to order a dedicated fleet of Pendolino EMUs for its Blackpool service, but difficulties procuring these led it to resubmit its application with the ‘225’ plan instead.

The GNWR application was for six return services on Mondays to Fridays, five on Saturdays and four on Sundays, with calls at Milton Keynes Central, Nuneaton, Preston, Kirkham & Wesham and Poulton-le-Fylde.

It envisaged services starting in May 2019, with rights granted until December 2026, although Alliance has now said the services ‘would be able to start in September 2019’.

However, GNWR will only be granted firm rights to operate five weekday services, as Network Rail raised concerns around capacity for the sixth, for which contingent rights will be granted instead; GNWR’s full weekend allocation has been approved. NR also raised concern about a clash between one of the services in the Down direction with the New Measurement Train on a Wednesday every two months, and ORR says it will deal with this via a footnote to the rights. Station calls will be as planned, except for one weekday Up service call at Milton Keynes about which NR also raised concerns.

Applications for open access services must pass ORR’s Not Primarily Abstractive (NPA) test, which indicates they would generate new revenue rather than abstracting from existing operators. ORR requires new services to achieve a ratio of at least 0.3 to be granted, meaning at least 30% of revenue is newly-generated. The regulator has concluded the GNWR services fall in the range 0.28-0.37; it notes this result is sensitive to calls at Kirkham & Wesham and Poulton-le-Fylde and intends to make including these calls a requirement in the access contract. Virgin’s three additional services introduced in May are unable to call at these stations because Class 390 Pendolinos cannot be accommodated.

ORR also says that to aid transparency and minimise uncertainty surrounding GNWR’s start-up processes it intends to make the access contract conditional on the timely procurement of rolling stock and will require the new services to be introduced by an appropriate longstop date, failing which the access rights would lapse. GNWR will therefore be reliant on the timely release of the ‘225s’ from the East Coast main line, where they will be replaced by new Class 800/801 units.