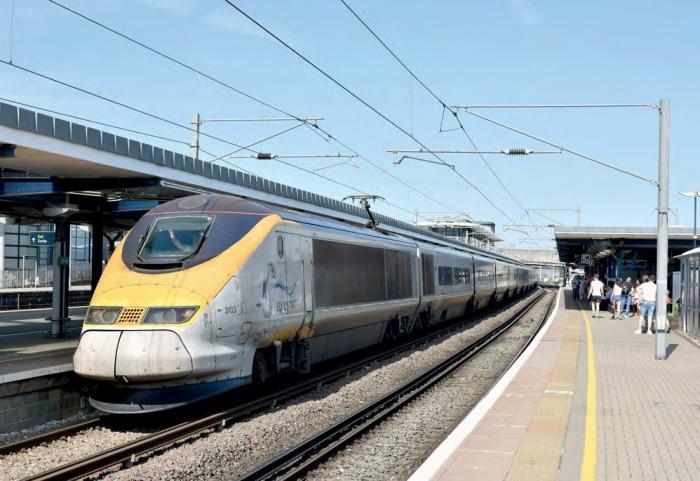 Eurostar Class 373: the driver of No 373103 gives a cheery wave while slowing for the station stop at Ashford International with the 10.14 St Pancras International to Marne-la-Vallée (Disneyland) service on 24 August 2016. The Spurs project will allow Class 374s to call here too. Tim Squires

THE LAUNCH of Eurostar e320 services from Ashford International has been pencilled in for 3 April 2018, following progress with the ‘Ashford Spurs’ project.

So far, the only Eurostar trains able to call at Ashford have been the original Class 373 units, as the new Siemens-built Class 374s are not equipped to deal with the signalling in the platforms. Both the Class 373s and Class 374s are equipped with the train-borne element of KVB (Contrôle de Vitesse par Balises), as this system is already in use at St Pancras International station (platforms 5-13) and also throughout the French national railway network away from the high-speed lines. It is this system that is being installed at Ashford under the spurs project, with train drivers continuing to observe the signals as now, but protected by KVB.

Various options were explored prior to choosing KVB for the spurs, including fitting the ‘374s’ with AutomaticWarning System (AWS) and Train Protection Warning System (TPWS), but this idea was discounted.

Stephen Gasche, Principal Transport Planner – Rail with Kent County Council, welcomed the project, saying it ‘will be a real milestone in the development of international rail services in Kent’.