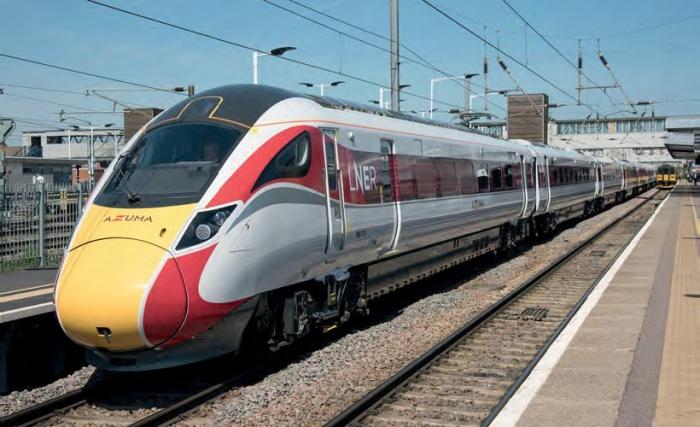 Preview trip: Azuma set No 800113 on arrival at Peterborough after working the press run from King’s Cross. Tony Miles 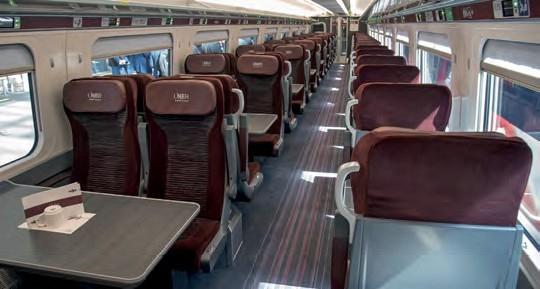 Shades of red: interior of first (above) and standard class on board the Azuma. Tony Miles 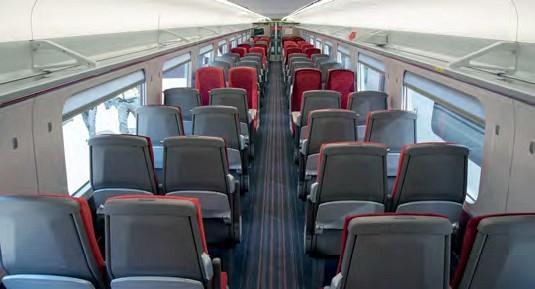 AN LNER Azuma carried its first passengers on 14 May when set No 800113 operated a special press run between King’s Cross and Peterborough, a day ahead of the first passenger services on 15 May.

LNER has 65 Azumas on order from Hitachi, procured through the Government’s Intercity Express Programme. These consist of 10x5-car and 13x9-car Class 800 bi-mode multipleunits and 12x5-car and 30x9-car Class 801 electric multiple-units.

First to be delivered are the 13 Class 800/1 nine-car bi-modes, and by the end of June LNER intends to have six daily diagrams worked by the new nine-car sets, with others involved in driver training. As of mid-May, 12 sets were with the company whilst the first, having been kitted out for extensive testing, has returned to Hitachi to be rebuilt as a conventional unit. The first passenger service on 15 May was to be between Leeds and King’s Cross, with the daily return working to Hull due to be added the following day. This will enable the return of the HST set drafted in from East Midlands Trains working this diagram, which was due to be handed back on 16 May.

The first five-car Class 801 electric sets should be delivered by the end of June, enabling type testing to be completed. LNER explains that one of the new challenges for drivers will be the coupling of sets during diagrams, which will be a key feature of its new service pattern.

Over the next year the entire fleet of 65 trains will be delivered, allowing LNER to withdraw its HST and InterCity 225 fleets. The company explained that whilst it should be taking its HST fleet out of service by the end of 2019, it expects to seek a derogation to retain six sets for up to six months. The HSTs are not compliant with Persons with Reduced Mobility (PRM) regulations which come into force at the end of this year, but LNER needs to retain the sets because planned blockades at King’s Cross will require the use of other terminal stations in London which currently cannot handle the Azuma trains. After the handback of the first HST, LNER will look to end the use of Class 90 locomotives to supplement the Class 91 fleet, expected in mid-June.

Once deliveries are complete the East Coast fleet will have increased from 45 to 65 trains and LNER says that as well as increasing capacity the fact that the bi-mode Class 800s can usually keep moving even if there is a technical issue will mean improved reliability over Class 91-powered trains, which ‘generally need rescuing’ should the locomotive fail.

For Hitachi the challenge moves from construction and delivery towards the reliable operation of the fleet, which the company says ‘will enable us to demonstrate our capability on a whole use cycle through the 27½ years of the contract’. The new contractual model means LNER will only pay Hitachi for sets available for service, with Hitachi facing penalty payments if it fails to deliver the contracted number of sets, a change from the previous system which, as LNER explains ‘Means we pay for a Class 91 even if it has a fault and isn’t available for service!’.

As well as resolving signalling interference issues with the Azumas, which is making good progress, a key challenge facing operators on the East Coast main line is the upgrade of the power supply between Bawtry and Edinburgh (‘Informed Sources’, p32). Tony Miles