AROUND TWO-THIRDS of respondents to the latest consultation on the proposed Bakerloo Line extension have expressed support for the scheme, according to Transport for London.

The project would extend the line beyond the current Elephant & Castle terminus to Lewisham via New Cross Gate and two new stations on the Old Kent Road. TfL’s aim is that the extension opens in 2029, in line with the planned modernisation of the Bakerloo Line through the Deep Tube Upgrade Programme (DTUP).

The latest consultation, which ran between February and April, sought views on the locations of stations and ventilation shafts and received nearly 5,000 responses. TfL says respondents preferred a new Bakerloo Line station entrance near to the Elephant & Castle shopping centre and existing Northern Line entrance. Preferred locations for the two new stations on Old Kent Road have been identified, while there was support for tube stations at New Cross Gate and Lewisham. 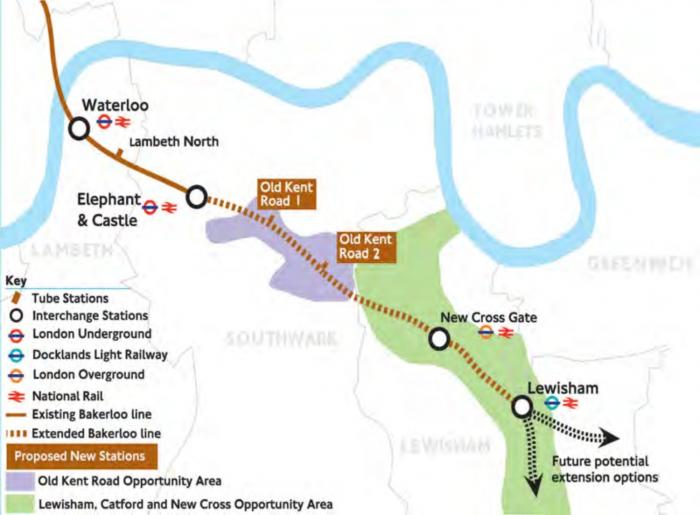 Map of the proposed Bakerloo extension.

Once a decision has been made on the preferred locations of the stations and ventilation shafts, work will take place to finalise the tunnelled route, with a further consultation expected to follow in 2018.

TfL says there remains a commitment to a second phase extension of the Bakerloo Line beyond Lewisham, and that work is continuing to build a case for this.