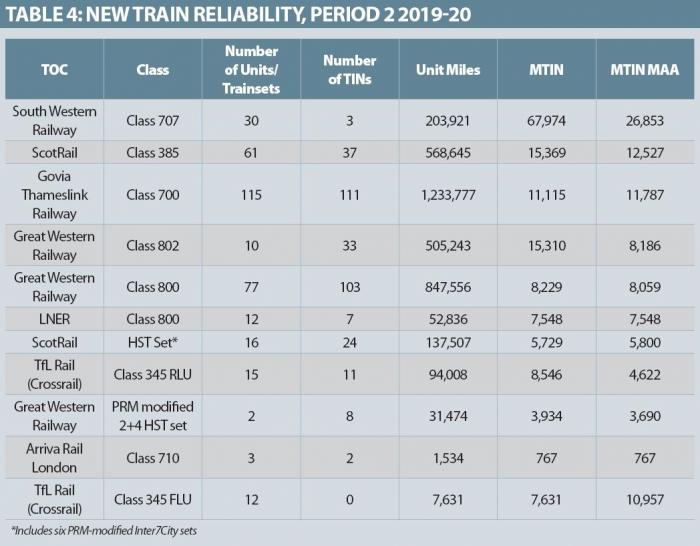 After last month’s review of new train deliveries, or non-deliveries in some cases, it’s good to be able to add three more fleets to the Table of Truth. Making their debuts in sixth and seventh place respectively are the LNER Hitachi Class 800 bi-modes and the ScotRail Inter7City IC125s.

Clearly having benefited from all the mileage accumulated by the GWR Class 800s, the LNER fleet is not far short of its Western cousins. Initially life has been relatively gentle, with 12 sets covering six daily diagrams plus driver training.

Nothing wrong with that, of course. A progressive infiltration is the way for train crew, depot staff and the trains to build up to the tempo of the full timetabled service in December. Much is made of the 1,000 or 2,000 miles of fault-free running required before acceptance, but this doesn’t prove anything.

Few trains survive first contact with the passengers, who will use doors, misuse toilets, switch things on and off and generally make a nuisance of themselves. Fault-free running cannot simulate this.

What is going to be interesting is the reliability growth of the two Hitachi fleets. This will pit North Pole and Stoke Gifford depots against Doncaster Bounds Green and Craigentinny. Time for an inter-depot competition, Hitachi? We could announce the winners as part of the Spanners in November.

It will also be interesting to compare the two fleets of re-purposed ‘pocket rocket’ shortened IC125s. Both ScotRail and GWR are currently running ‘Classic’ sets alongside the Passengers with Reduced Mobility rules-compliant modified trains with their power doors and Controlled Emission Toilets (CET), so the results to date are for interest only.

Finally, Bombardier has a second contender in the battle of the new generation EMUs with the first results from the three Class 710 Aventra units in service on the Gospel Oak – Barking line. But with such a low fleet mileage it is stuck at the foot of the table. The MTIN for a fault-free period is just the fleet mileage.

Eversholt Rail’s ever-helpful PR people have asked if I could republish Table 2 (CAF contracts and deliveries) from last month’s column (Table 5, below). My table was based on dates in official statements made when the orders were announced and did not include subsequent variations. I have updated the table to include this new information.