COAL LOSS MITIGATED BY GROWTH IN OTHER COMMODITIES 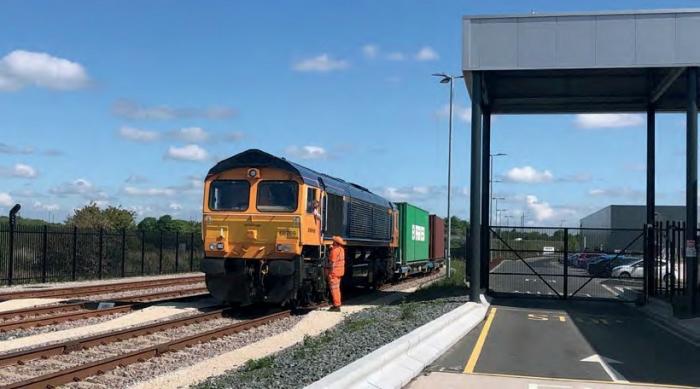 Intermodal: the most important traffic segment today. This is the new 337-acre Doncaster iPort, where GBRf has introduced a new service from Felixstowe, five days a week – the company’s 16th daily intermodal service.

RAIL FREIGHT volumes improved during 2018-19, according to statistics from the Office of Rail and Road.

Releasing figures for both Quarter 4 (January to March) and the year as a whole, ORR reports a 3% increase in the volume of rail freight moved over the 12-month period to 17.4 billion net tonne kilometres.

The increase arrests a decline which has been ongoing since rail freight volumes peaked in 2013-14; at that time coal accounted for 36% of rail freight moved, a figure which now stands at just 7%. Since the announcement in 2015 that the UK would phase out coal-fired power stations, the amount of coal moved by rail has fallen by more than 85%, with a 6% fall reported in 2018-19.

However, ORR points out that other commodities have seen significant rail freight growth to offset the fall in coal traffic. In 2018-19, the largest increases were for the ‘other’ (11%) and construction (5%) categories.

Turning to Q4 alone, the total amount of freight moved was up 5% on the same period the previous year, which ORR says may have been helped by easier traffic conditions in a less severe winter.

Coal was the only commodity to see a year-on-year decline during Q4, while construction and domestic intermodal reached their highest totals for the period since the time series began.

During 2018-19 freight performance improved, with normalised freight delay recorded at 11.6 minutes per 100 train kilometres, 4% lower than in 2017-18. Perhaps unsurprisingly given the better weather, for Q4 rail freight enjoyed a 13% reduction in delays from the same period the previous year and recorded its best performance for the period since the time series began in 2007-08.

Despite the positive figures, the Freight Transport Association has cautioned that the outlook for the current year is more uncertain, with respondents to the survey informing FTA’s 2019 Logistics Report anticipating a substantial decrease in domestic intermodal activity. Elizabeth de Jong, Director of UK Policy at FTA, commented: ‘While 2018 saw a notable growth in domestic bulk and semi-bulk rail freight – possibly due to the expansion of the construction sector – sentiment for 2019 is much more subdued, indicating we are entering more challenging times. The uncertainty surrounding Brexit has already led to hesitancy among clients, with manufacturing growth reaching a three-month low in January and new business projects falling to an eight-month low.’