By Chris Stokes 26th March 2020
Between the Lines 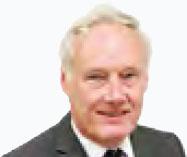 10 years after the initial in principle decision to build High Speed 2, the current government has confirmed that the project will go ahead.

This has been a long and tortuous saga, during which time China has planned and built thousands of miles of high-speed railway. In contrast, we have spent a lot of money and created a number of building sites! China is of course a very different country; in the early stages of the coronavirus outbreak, it constructed two large hospitals in Wuhan in 10 days, although probably riding roughshod over some of its citizens in the process – there must be a happy mid-point.