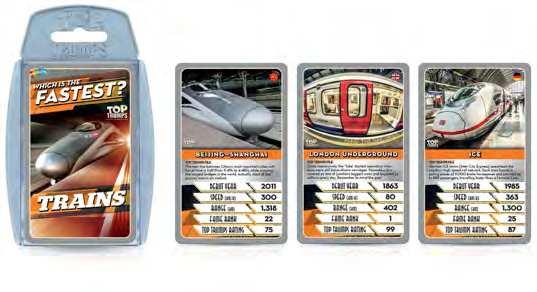 Not all about speed: the London Underground may not be fast but has one of the highest ratings in the ‘Fastest Trains’ Top Trumps game.

DEPENDING ON their age, most readers will have come across Top Trump cards, either in their own childhoods or through their children. Top Trumps is still going strong and a new set has just been issued in time for Christmas.

While the title of the set is Fastest Trains, to say the choice of subject is eclectic is putting it mildly. In addition to genuine high-speed trains, there is a smattering of steam, from Puffing Billy to the 20th Century Limited. There are also a couple of maglevs plus metros, where the London Underground has one of the highest ratings, beating the Paris Metro 99-75.

An ideal stocking filler, although we would have preferred an IC125 to the Hogwarts Express.