MAY 2018 TIMETABLE CHANGE IN LIMBO 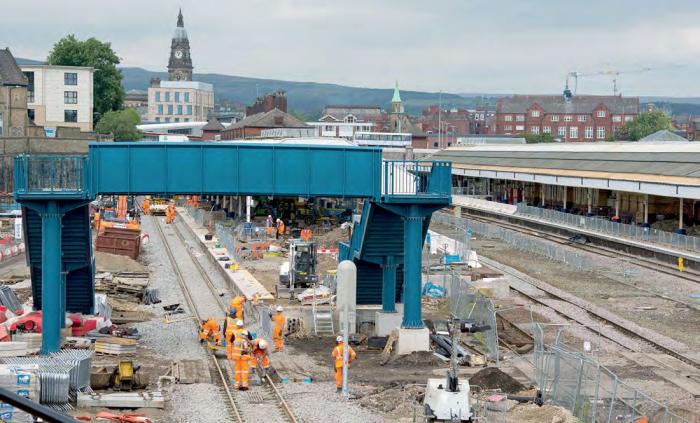 Electrification project: remodelling underway at Bolton on 22 August 2017. An additional platform can be seen under construction on the west side of the station, reinstating a long-closed platform to create a fourth through platform ahead of installation of overhead wires here.
Tony Miles

NETWORK RAIL has confirmed electrification of the 25-mile Manchester to Preston route via Bolton will not be completed in time for the May 2018 timetable change.

The announcement will have a significant impact on service changes planned by both Northern and TransPennine Express for May 2018, many of which had already been deferred from the December 2017 timetable change. Network Rail says the main cause of the delay is ground conditions on the Bolton corridor, with concerns around uncharted mining sites. NR also reports finding running sand and even running water as some piles were being inserted into the ground, and around 300 locations for stanchions needed bespoke solutions. In total around three out of every 10 foundations were unsuccessful at the first attempt and many of these required visits over several possessions to complete work, rather than being finished in one visit.

Responding to questions over whether better surveying should have been carried out before work started, NR’s senior project sponsor Andy Morgan explained ‘In some locations the ground conditions didn’t match trial holes that had been bored adjacent to many locations, we were even putting foundations in within half a metre of the surveys and were still finding that ground conditions were different!’ 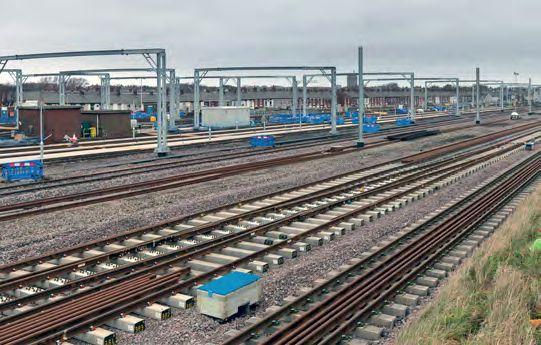 Mr Morgan also explained that, faced with the choice between a long blockade of several weeks to complete work by the May timetable change or the use of weekend route closures, the latter was considered preferable. ‘The best solution is the 25 weekend closures, a blockade would have meant a very short-term planning timescale, getting the commuters onto buses would have been a huge challenge and it needs to be planned round other project work already planned.’

Network Rail is now confident the electrification can be completed by late summer or early autumn, and meanwhile it is working to mitigate the impact of the closures and the delay to completion with Northern and TPE and to work out what the May 2018 timetable will finally look like. One significant impact will be the loss of services between Manchester and Blackpool at weekends right through the summer, an important leisure destination and source of a significant level of income. There is also an awareness that the requirement to announce timetable changes 12 weeks ahead (T-12) will be missed, which should lead to penalty payments by Network Rail.

One final concern as Modern Railways closed for press is the fact that the contractor for the work is the financially troubled Carillion. With the future of the company in doubt, Network Rail told Modern Railways ‘We’ve been working with Carillion and we have plans in place that we could look to turn on if anything happened. We’re hopeful there will be a recovery plan, however a lot of the contractors that work for Carillion are also our suppliers so there are things we can do.’

Industry sources suggest the operators have had little confidence in NR meeting the May 2018 deadline for some time, with one manager telling Modern Railways in mid-January ‘A week ago they thought they could do it and then suddenly asked for a five- or six-week complete block of the line. That would be wrong for customers.’

With the decision taken at such a late stage, timetable bids for May 2018 were already in and new timetables were appearing online; as the source continued ‘The operators can’t just roll over the existing timetable because many other operators are changing their timetables at that point based on changes to Northern and TPE. If TPE continues to operate via Wigan its trains will hit the heavily congested Castlefield corridor at different times and that impacts on the West Coast main line and even the East Coast as well. CrossCountry and Virgin West Coast have made bids for paths in May that reflect Northern’s timetable changes, and where will Northern find the extra trains for diesel operation of services that should be worked electrically? There are no spare trains.’

The impact on Northern, where new services such as Macclesfield – Bolton – Blackpool were due to begin in May, operated by EMUs, will not be possible, is understood to explain why its public reaction has been more ‘robust’.

One insider told Modern Railways ‘This is a scheme that should have been delivered in December 2017; we were told in the franchise process it would be delivered by December 2017, it’s not a few weeks late, it’s effectively a year late. It’s a straightforward contractual point; Northern was told infrastructure would be in place, it’s not and it will have consequences. The compensation that NR will have to pay isn’t about a delay of a few weeks to a new timetable, it’s about rolling stock, train crew recruitment, revenue, performance risk and the time wasted by a lot of timetable planners working towards May 2018.’

There is some good news in the North West, however, with Network Rail confirming electrification of the Preston to Blackpool line, closed completely for the work, is progressing well and is due to finish as planned by May. In addition, the electric feeder station at Stalybridge, vital to provide resilience to the expanded electric network and eventually planned to feed the wires over the Pennines, was commissioned in December 2017, and work to connect it to the overhead wires at Manchester Victoria, initially via what has been dubbed ‘the big extension lead’ until the route is wired, is progressing well. Extension of the wires at Manchester Victoria beyond the crossovers to the north east of the station will allow electric trains to turn back in a different platform at times of perturbation. Tony Miles