THE HIGHLANDS and Island Transport Partnership (HiTrans) has unveiled further details about the possibility of running sleeper services north of Inverness. Modern Railways first covered this story in our March issue (p16).

A rail update to a meeting of the partnership reports that Systra has been appointed to examine the feasibility of running an internal Scottish sleeper from Caithness to Edinburgh and the central belt. The move follows early discussions with Caledonian Sleeper operator Serco.

The new service would likely use Mk 3 sleeper vehicles made redundant when CS introduces new Mk 5 coaches built by CAF in Spain. HiTrans suggests the Caithness operation could convey two sleeping cars, two seated vehicles and a lounge car. A southbound working would leave Thurso at 19.30, calling at Inverness at 23.30, Aberdeen at 02.30 and arriving into Edinburgh at 05.30. In the northbound direction, a departure from Edinburgh at 23.50 would give arrival times in Aberdeen at 03.00, Inverness at 06.00 and Thurso at 10.30. This service could replace the first down working of the day from Inverness, the current 07.02 ScotRail departure.

Another possibility would be to convey freight on these trains, with HiTrans suggesting the ability to carry four 40-foot and two 20-foot boxes on twin wagons could provide welcome revenue, carrying retail products and parcels northwards and locally-produced food southwards. A disadvantage of this idea would be that passengers would be required to vacate sleeping berths immediately on arrival at Edinburgh so that the containers could continue to a freight terminal.

The Systra review is to examine possible markets, train paths, rolling stock and traction, and freight opportunities, and will also provide costings for the service.

Meanwhile, Mott MacDonald is to investigate for HiTrans the possibility of road and rail traffic sharing the railway solum on the Stromeferry stretch of the Kyle of Lochalsh line. The proposal is being considered due to rockfalls on the road. A site visit has suggested ‘no significant engineering problems’ would arise from such an idea, other than the risk of rockfall and the need to develop an appropriate rail and highway traffic management system. Options under consideration include a track sharing arrangement or conversion to tramway of part or all of the route. It is hoped the option selection process could help inform future rolling stock provision for the line, with tram-trains one idea under consideration. 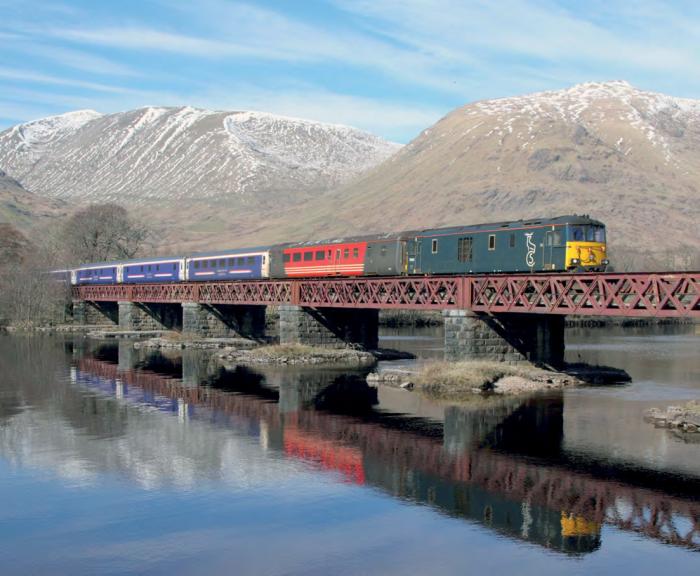 Awesome: Class 73s top and tail the 10.30 Oban to Polmadie sleeper empty stock working at Loch Awe on 25 March 2017, at a time when the Fort William sleeper was being diverted to Oban due to engineering works. Jamie Squibbs