SERVICE REDUCTIONS will be made in the short-term to reduce disruption experienced in the congested Castlefield corridor in Manchester. A paper to the Transport for the North board on 8 January outlined that Richard George had been engaged by the Department for Transport to recommend service changes which could be implemented by December 2020. 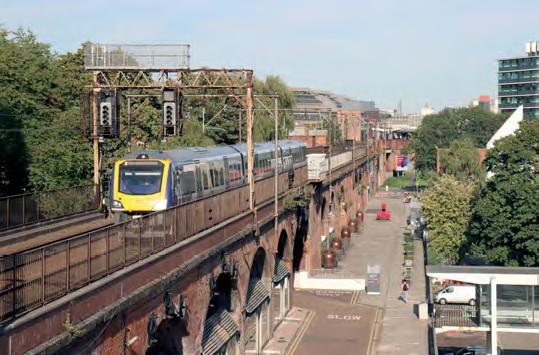 Castlefield corridor: a Class 195 picks its way over the crowded tracks while working from Manchester Airport to Barrow-in-Furness on 14 September 2019.
Philip Sherratt

The paper reports that Network Rail has undertaken a review of the Northern Hub ‘Package C’ scheme, which includes provision of two additional platforms at Manchester Piccadilly and longer platforms at Oxford Road. This work found that without these changes services would need to be reduced to 14 trains per hour (tph) to allow ‘robust operation’ compared to the 16tph committed through the Northern and TransPennine Express franchises. NR’s work identified that there is no simpler and cheaper set of works on the Castlefield corridor that would robustly provide capacity for 16tph and longer (eight-car) trains.

A Transport and Works Act Order is required for the Package C works, which was subject to a public inquiry in 2015 and awaits a decision by DfT ministers. The TfN board paper reports the broad price range of Package C in full as being around £700 to £800 million.

In addition to Package C, a suite of potential enhancements to allow operation of committed franchise services includes a new turnback siding east of Manchester Victoria, increased platform capacity at Manchester Airport station, and other potential works in the Manchester area. Network Rail is to recommend a shortlist of schemes for further development funding to the North of England Programme Board in February 2020.

TfN’s board resolved to seek long-term resolution of the issues in Manchester by providing adequate infrastructure rather than by service reductions, while accepting such reductions might be required in the short-term. It called on the Secretary of State for Transport to approve the TWAO for Package C and begin detailed design work as soon as possible, while supporting other improvements including grade separation at Ordsall Lane and early development of three quick win schemes.