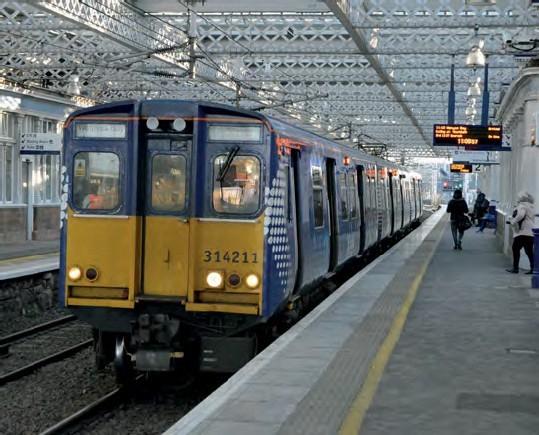 Fine overall roof: No 314211 on a Glasgow Central to Wemyss Bay service at Paisley Gilmour Street on 17 January 2019. The Glasgow Airport Rail Link, abandoned in 2009, would have branched off here for the airport; the idea could be revived under the Glasgow Metro proposals. David Andrews

CREATION OF a Glasgow Metro and construction of a tunnel linking Queen Street and Central stations are among recommendations made by the Glasgow Connectivity Commission, set up by the city council.

The commission recommends the creation by 2025 of a rail link between Paisley Gilmour Street and Glasgow Airport using currently identified City Deal funding, and that this should be able to be extended to become the first leg of the Glasgow Metro, serving the South Clyde Growth Corridor.

The commission believes the Glasgow Metro could be formed from a combination of parts of the existing rail network (such as the Cathcart Circle and Central low level line), reopened sections of dormant infrastructure (such as the Central low level line via the Botanics to Maryhill and the London Road tunnel to the sports and events cluster at Parkhead and Tollcross), along with new sections of route and street-running sections.

The commission is agnostic on the type of technology suitable for each route but suggests new routes such as that along the South Clyde Growth Corridor to the airport could use automatic metro technology of the kind being extended in Copenhagen. A combination of segregated and street running would be possible by using the kinds of light rail vehicles used on the Porto Metro. A phased delivery plan is recommended, beginning with the first leg to the airport.

A further weakness of Glasgow’s transport system is highlighted as the lack of a link between Queen Street and Central stations. The commission rejects the ‘Crossrail’ project as a solution to this; this proposes reopening for passenger use of the City Union rail link via the bridge over the river Clyde east of St Enoch. Instead it suggests building a new tunnel linking the existing rail networks either side of the river Clyde, with the most straightforward option being a link from the Ayrshire and Inverclyde lines in the vicinity of Shields Junction via a single underground station in the city centre located between Central and Queen Street so that the escalators from each end of the station meet the surface inside or immediately adjacent to the two existing high level stations. From the city centre, the tunnel would then continue north, paralleling the tunnel from Queen Street high level station, re-joining the existing network near Cowlairs Junction.

Preparedness for high-speed rail is also a key recommendation of the commission, which suggests the only credible option for a high-speed rail terminal in Glasgow is to redesign Central station to accommodate HS2 trains. This would require at the very least the extension of the station over the river Clyde including the reinstatement of the former additional bridge and tracks over the river to the east of the station approach, and the creation of a new southern entrance and concourse roughly on the site of the former Bridge Street station.

The commission emphasises that while undoubtedly ambitious these interventions are ‘deliverable, affordable and on a par with transport infrastructure investments that are increasingly commonplace in major European cities’. It suggests costs be shared equitably between the UK Government, Scottish Government and Glasgow’s regional authorities, with a 20-year funding package identified to implement the recommendations.