FIVE FOUR-CAR Class 319 Flex units, designated Class 769, will be introduced to the Wales and Borders franchise next year. The trains will be leased following an initial £1.9 million investment by the Welsh Government and £1 million from Arriva Trains Wales. The concept has been developed by Porterbrook, and involves fitting diesel engines to the dual-voltage EMUs to allow operation on non-electrified routes.

Welsh infrastructure secretary Ken Skates said: ‘The agreement to secure these trains is one part of a number of agreements with rail industry bodies that ensure that the majority of the current Wales and Borders fleet will comply with Persons of Restricted Mobility regulations by 1 January 2020. The extra trains will be available for the new franchisee to use until at least 2021.’

Modern Railways understands the trains are likely to commence operation in Wales next summer, giving ATW only a short period to use them before its franchise is due to end in October 2018.

More than 70% of ATW’s fleet does not meet PRM requirements for continued operation after 2019. Porterbrook highlighted the Class 769 option when giving evidence last spring to a Welsh Assembly committee. It estimated at £10 million the cost of ensuring PRM compliance for the Class 150/2 vehicles used currently by ATW, but declared it was not willing to modify any Pacer units. 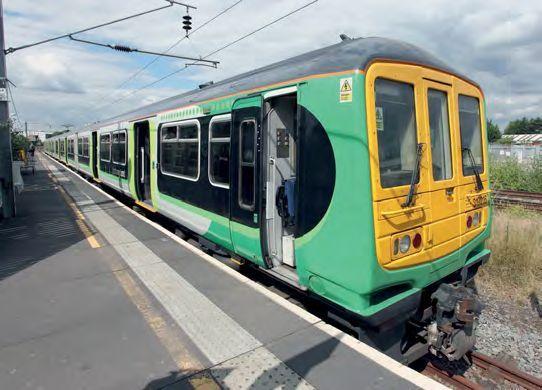 Bi-mode idea catching on in Wales: Class 769, a derivative of the Class 319 EMU, has been earmarked for the Welsh franchise. This is one of the electric originals, unit No 319216, after arrival at Watford Junction with the 15.22 from St Albans Abbey on 10 July 2016.
Antony Guppy

Simon Hughes, ATW’s fleet director, said tests had indicated Class 769 units would match the acceleration and speeds of Class 150/2s on the Valley lines, which are steeply graded in places and have closely spaced stations. The Flex units are already PRM compliant.

Their 3+2 seating and absence of intermediate cabs will result in more seating than is provided by four-car Pacer and Sprinter formations, which Flex units are likely to replace.

Most of the two-car units displaced by ‘769s’ will provide additional capacity for other services. Two Class 150/2 units at a time are currently out of service for heavy maintenance, and PRM modifications will be tagged onto this work. Deployment of Flex units will allow a third Class 150/2 to undergo modifications without impairing ATW’s performance.

Class 158 units will be modified as part of their C6 overhauls, commencing in late 2017. Mr Hughes said they were already PRM compliant in most respects. The main alteration required is fitment of controlled emission waste tanks.

None of the electrical equipment will be removed from ‘769s’ destined for Wales. After completion of Great Western electrification to Cardiff, they could operate electrically from Cardiff to Severn Tunnel Junction, where they would switch to diesel operation for the rest of the route to Gloucester and Cheltenham. However, this would release only one two-car unit per service, based on today’s usual diagramming.

Would safety regulations permit Class 769s, or other third-rail EMUs retrofitted with diesel engines, to operate the Wrexham-Bidston line and continue in the Mersey tunnels to Liverpool? No definitive answer was available as Modern Railways went to press. Each bi-mode unit would displace only one two-car Class 150/2 unit from the line, but studies have predicted large growth in passenger numbers if the change of trains at Bidston were eliminated. Rhodri Clark