Engineering is an art. At its best it is the art of the barely possible. Take for example putting 3,300hp into a Co-Co diesel locomotive with a 17-tonne axle load back in 1955, a time when that was a respectable rating for an electric locomotive. And then taking a couple of tonnes out for the 99-tonne production loco. That’s a marginally better power to weight ratio than the IC125 power car designed two decades later.

And the magnitude of this achievement was emphasised in September when the Deltic Preservation Society’s immaculately maintained and presented Alycidon with 10 on, including the generator car, left York 15 down. After a storming run, including sustained 100mph running, D9009 arrived at the Cross right time (Gentle reminder, this is Modern Railways – Ed).

But engineering is above all the art of compromise, of balancing cost against performance, reliability, weight and a host of other parameters. At a time when you could buy a plain vanilla Class 37 for £100 per tonne, a Deltic cost twice that figure. The trade-offs were clear.

Which brings us to the Class 800’s current electromagnetic interference (EMI) issues (Thank goodness – Ed). The causes of the problems illustrate some of the trade-offs and compromises facing electric traction engineers.

While Hitachi policy is not to comment, either or off the record, on developing contentious issues, the company has pointed out an omission from last month’s item on the electromagnetic compatibility (EMC) problems affecting Class 800 operation on both the Great Western and East Coast main lines. I failed to report that although Class 800 emissions are higher than those of a Class 387, they are within the relevant Technical Specification for Interoperability (TSI) and also lower than the standard requested by Network Rail and published in draft. Hitachi assures me that when running under electric traction, the Class 800 series is compliant with the relevant sections of the TSI (EN50121) and also Network Rail’s own standards.

This needs a bit of background. When the Class 800 safety case was being developed in 2013-14, the British Standards Institution (BSI) issued a draft of EN50121 for comment. This also included an annex of national specific limits – detailing the susceptibility of UK digital telecommunications systems to traction interference.

This annex gave limits applicable to various types of legacy equipment, and their communications systems. Yet interference remains a concern, and not just with solid state interlocking (SSI), but also communications for level crossing CCTV and Signal Post Telephones. Axle counters installed during the Great Western main line resignalling are modern kit and comply with EN50121, but these also remain a concern to NR.

So while all parties claim, through rictus grins, to be working together to resolve the Class 800 EMC issues there is clearly a fundamental disagreement between infrastructure operator and train supplier over this issue. And while NR isn’t saying much either, the point is made that all of the other new generation electric trains comply with the annex.

IMPEDANCE REACTANCE AND ALL THAT

Low impedance and reactance is a good thing when it comes to efficiency in equipment like transformers. But once you have to take EMC into account they have their uses.

Because impedance increases with frequency, and it is high frequencies that generate most interference problems, high impedance means that potentially troublesome high frequencies are resisted or choked. And slung under many three-phase drive traction units you will find chokes.

These are copper coils wound on iron cores that provide lots of impedance. But while they choke interference, this comes at a price. With all that copper and iron, chokes are very heavy, typically 1.5-2 tonnes. But as my colleague Ian Walmsley notes, would you rather carry round two tonnes of copper and iron or have a £5 million train stuck in the sidings because it can’t obtain a safety case? 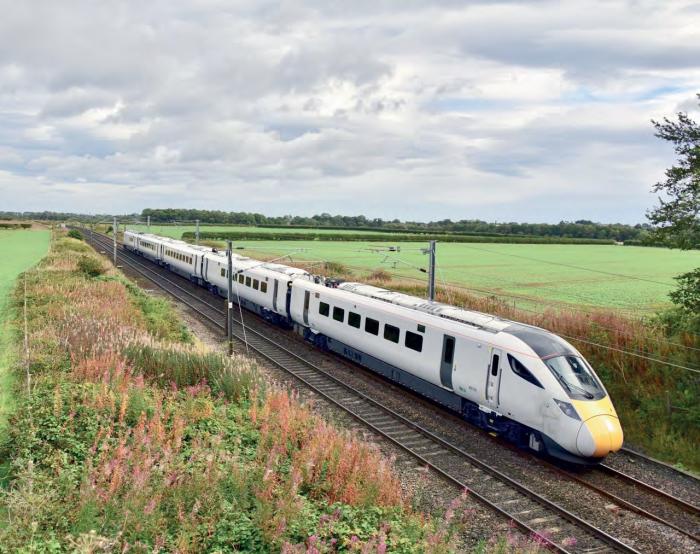 IET on test: No 800202 running southbound on the East Coast main line in Northumberland on 14 September 2018. The location is Guyzance, between Warkworth and Acklington; our photographer alleges there are only two places in the UK with names ending in ‘zance’! Bill Welsh 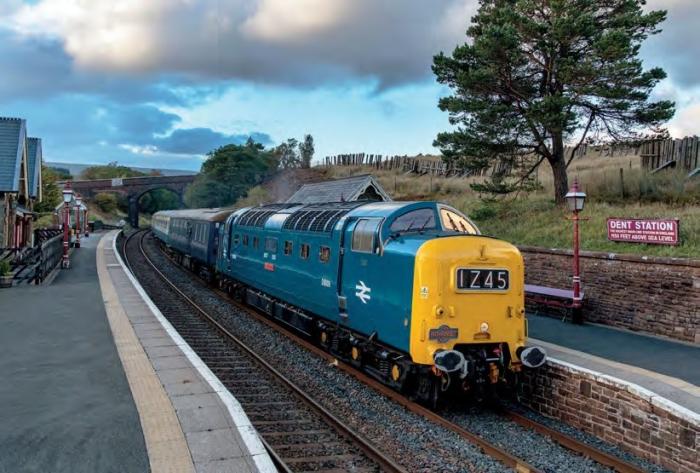 Deltic on song: No D9009/55009 Alycidon canters through Dent with the Carlisle to Willington ‘Deltic Deviator’ charter on 29 September 2018. John Hales 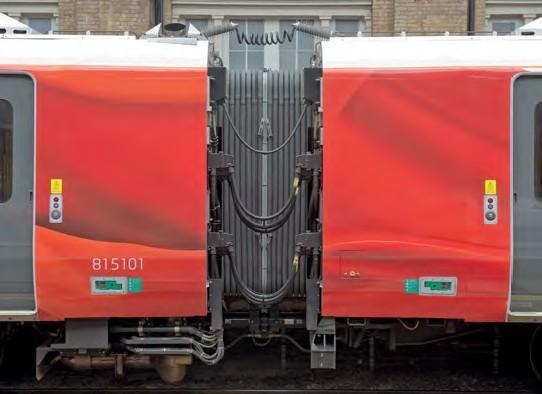 Ladder for vandals? Inter-car cables on unit No 800101. Tony Miles

As explained last month, in the case of the SSI interference on the ECML north of Colton Junction, there are mitigating circumstances. In an action replay of the introduction of the Class 390 Pendolino fleet on the WCML, the Class 800 emissions exposed a weak point in the Data Link Modules that connect the interlocking to lineside signalling equipment.

Interestingly, while this experience was apparently forgotten, and signalling immunisation did not feature in the infrastructure upgrades supporting the Intercity Express Programme on the ECML, corporate memory loss was not total. Before the Edinburgh to Glasgow electrification went ahead, the earlier SSI resignalling got the full set of anti-interference abbreviations.

But should problems have been expected with the ECML SSI anyway? Some years back, as part of Alstom’s support for a proposal to operate Pendolino tilting trains on the ECML, a series of trial runs was organised. With the Class 390 benefiting from extensive interference testing and amelioration following the Proof House Junction problems, EMC was not considered an issue.

No problems emerged during the trial runs. The main concern was gauging and, according to an informed source, the paint stayed on.brings us to compromises (At last! –Ed). You can find the technical background in the box on the previous page.

Transformers, which convert the 25kV current from the pantograph to a more usable voltage, are full of copper windings that can be designed to provide more reactance and thus reduce the critical harmonic frequencies. For example, the Class 390 has a high reactance transformer. This is achieved by incorporating an additional 1.5 tonnes of copper over that needed for the basic function.

Interference is generated by traction return AC currents in the running rails inducing AC currents in lineside wires. These wires carry various signals from axle counter data to speech to CCTV and use defined frequencies.

Three-phase drive traction packages switch the current on and off at high frequency to create the variable voltage and variable frequency supply needed by the traction motors. Back in the 1980s Birmingham University led the research into switching strategies designed to avoid the critical frequencies in lineside equipment.

With the advent of the Insulated Gate Bipolar Transistor (IGBT), higher switching frequencies became possible. In addition to the basic frequency, harmonics (multiples of the frequency) have to be taken into account. Typical IGBT traction switching frequency is around 900Hz (cycles/sec). The Hitachi Class 395 and 385 EMU traction packages switch at 950Hz.

For the Class 800 traction package Hitachi is reported to have reduced the switching frequency to 750Hz, giving a 20% reduction in switching losses. However, this also moves harmonics into frequencies used by lineside equipment.

Trains will have more than one inverter. If you arrange a pair of inverters to co-ordinate their switching you can effectively double the frequency, which is a good thing. This is known as ‘interlacing’. The only downside is if one inverter of the pair drops out, but inverters are very reliable.

However, the 800 series trains have either three or five powered vehicles, each with a single inverter feeding the four traction motors, which rules out interlacing. With some clever control engineering you could interlace the three pairs of inverters in two five-car units running in multiple.

These are the likely factors behind the Class 800’s EM emissions characteristics. As this column was going to press, informed sources reported that Park Signalling, the company which designed and manufactured the Isolating Surge Protection Unit (ISPU) which solved the Pendolino SSI interference problems on the WCML, is now on the ECML case.

Getting LNER’s Class 800 bi-modes and Class 801s into revenue-earning service is not going to be quick or easy. However, the latest aspiration for Type Acceptance is now late November. This is a matter for Hitachi, DfT, as systems integrator, Network Rail plus, now, ORR with its suggestion that the inter-car connector cables may need to be shrouded to prevent their use as a ladder.

In this situation LNER policy is that when Acceptance is achieved it will start an eight-week programme of driver training. Service entry will follow, the extent dependent on the scope of the Acceptance and train deliveries