RAIL PASSENGER groups have questioned the appropriateness of toilets and seating for long journeys on Transport for Wales’ new Class 197 DMUs. 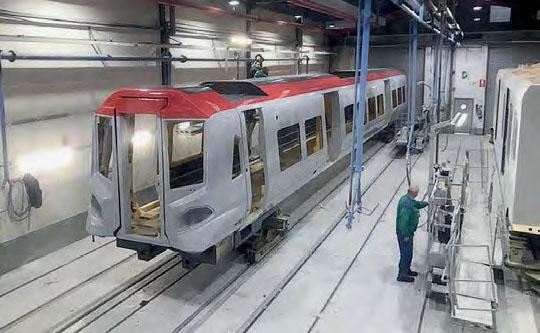 CAF-built trains for Wales: the first Class 197 bodyshell at the manufacturer’s Beasain factory in Spain ahead of delivery to the Newport facility in south Wales for assembly.

The Shrewsbury Aberystwyth Rail Passengers’ Association (SARPA) says the Rail Delivery Group’s minimum requirements are that no inter-urban DMUs should have fewer than two toilets, and there should be at least one toilet per 85 seats. The 21 Class 197s with European Rail Traffic Management System (ERTMS) for Cambrian services will be two-car units.

In a letter to Assembly Members in March, SARPA chair Jeff Smith said some trips from the West Midlands to Cambrian stations could take about five hours. Railfuture Wales said one toilet per unit was not suitable for the nature of the routes the units will operate, including Manchester to Milford Haven.

A TfW spokesman said the single toilet in two-car units was in line with toilet provision on new fleets being delivered to other operators. ‘The toilets will be capable of two full days’ operation in terms of water and retention tank capacity’ he said. ‘Routine servicing of the toilet tanks will be scheduled around the diagrams the units are operating to ensure this. The two-car Class 197s will often run with a second unit on long-distance services, providing two toilets for a four-carriage train.’

TfW has intervened, with an additional £1.9 million, to prevent the Class 197s receiving the same type of seat as Thameslink Class 700 units (‘Moving Wheels’, February issue). However, Railfuture Wales and SARPA have concerns the seat chosen by TfW, without seeking any passenger feedback, may be unsuitable for long journeys.

TfW said it was funding an upgrade to the Fainsa Sophia seat, ‘the highest option available’. The spokesman said: ‘This seat is used in a large number of UK long-distance fleets and is considered to offer good levels of comfort for long-distance operations.’

SARPA says even with the planned service frequency improvements the Class 197s represent significantly less than TfW’s promised 65% increase in capacity ‘across our entire network’. SARPA has asked for ERTMS on more Class 197s, including some three-car units. This would provide a ‘cushion’ for times of low availability of the usual Cambrian fleet, it argues.

Asked about seats aligning with windows, the TfW spokesman responded: ‘Carriages will be bright, airy with open window space. We have carefully chosen a layout to ensure that customers have a comfortable journey, and, where possible, this includes aligning seats with windows so that customers can enjoy the beautiful countryside.’