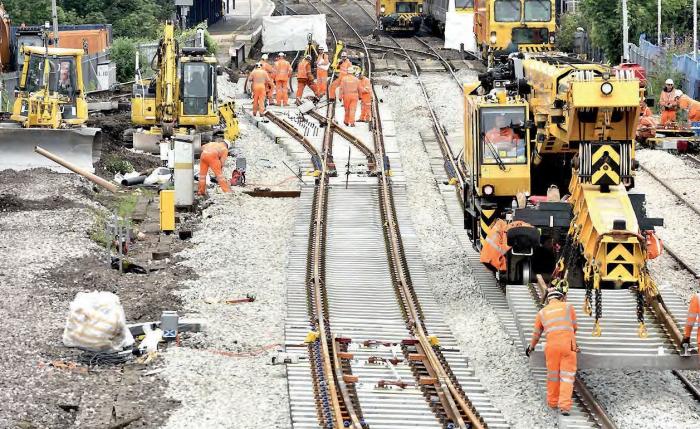 We had been warned that the Department for Transport’s High Level Output Specification (HLOS) for Control Period 6 (2019-24) would be restricted to Operations Maintenance & Renewals (OMR). Any enhancements will be announced as and when they have a business case, become affordable and the Treasury has some spare borrowing capacity.

But even this softening-up had not prepared me for the skimpy document published on 20 July. When you got rid of the covers, title pages and so on, everything DfT had to say about the railway in CP6 was contained in just six pages. And half of those were an annex that looked like some hastily assembled padding on future demand – but see next month.

What little content there is focuses on ‘the changes achievable through the operations, maintenance and renewal of the existing railway’ over the five years of CP6. However, DfT’s real concern is whether the initial cost estimates for renewals are affordable.

These were provided by the Office of Rail & Road (ORR) in its advice to ministers in February this year (Table 1). They are based on the volume of renewals required at current costs. DfT is rightfully concerned that they ‘do not contain an allowance for efficiency’.

A quick word here about ‘efficiency’. This is ORR-speak for ‘unit cost reductions’.

For example, in previous Final Determinations of Network Rail’s income for a new Control Period, ORR has assumed x% efficiencies over the following five years. In other words, renewals would be x% cheaper by the end of the Control Period.

Thus, for the first two years of the current CP5 (2014-19), ORR’s Final Determination assumed 11.6% efficiency improvements. But out on the real railway renewals efficiency fell by a staggering 23.4%. To put that 23.4% in monetary terms, the work actually delivered by Network Rail cost £800 million more than forecast.

So we can’t blame DfT and the Treasury for wanting some efficiency commitments for CP6, preferably signed off by Network Rail Chief Executive Mark Carne in his own blood, before issuing the Statement of Funds Available (SoFA) for CP6. Or in more measured terms, the Government ‘fully recognises’ ORR’s advice on the need for a significantly increased volume of renewals but wants Network Rail to ‘increase its efficiency and delivery capability across its portfolio of work during CP6’.

In its Advice to Ministers letter in February, ORR had argued that while it would expect an improvement over current unit rates, it was too early to set a CP6 efficiency assumption for the purpose of the SoFA. ORR’s further claim that even the likely efficiency improvements over the remainder of CP5 were uncertain cannot have inspired confidence within DfT and the Treasury.

NO BORROWING IN CP6

Following the reclassification of Network Rail as a government body in December 2013 it was no longer allowed to borrow funds on the money markets. Instead, the Treasury provided a loan facility of £30.3 billion, subsequently increased to £30.9 billion following the Hendy Review. According to the HLOS, the Government ‘does not intend for Network Rail to obtain any further loan during CP6 from either Government or other source’.

Renewals will be funded through the amortisation element in Network Rail’s direct grant from government. Any new enhancement schemes will be funded either with a Treasury loan or private finance.

With future savings unknown, ORR recommended that DfT based the SoFA on current (in)efficiency levels, arguing that the funds provided in the SoFA should be ‘an envelope not the determination of planned spend’. Any efficiency savings beyond ORR’s forecasts could be returned to taxpayers.

Such an approach would also reduce the risk of a formal ‘mismatch’ between the SoFA and HLOS – in other words, of the HLOS requiring more work than there was money to pay for it. Such a situation would ‘disrupt Network Rail’s business planning and create further uncertainty’.

Not surprisingly, this ‘I’m a Regulator, trust me’ approach has not gone down well. DfT has initiated its own studies to provide further assurance that the volumes and costs of operations and maintenance activity are ‘reasonable and affordable’. The Department also expects a parallel ‘strong and robust challenge’ from ORR on cost and delivery efficiencies.

And as part of its PR18 work, ORR is consulting on the reasons why Network Rail has not delivered renewals efficiency improvements in CP5, and how its approach to assessing Network Rail’s plans for CP6 should change. In addition, an independent study has been commissioned into the progress Network Rail is making in developing its plans for CP6. This work is aimed at providing greater assurance that Network Rail’s final plans will contain ‘robust efficiency proposals across all areas of expenditure’. I suspect DfT has heard that one before.

All of which highlights the inexplicable morass of ignorance surrounding Network Rail’s costs and efficiencies.

Why inexplicable? Because after regulating and monitoring, first Railtrack and now Network Rail, for 23 years, ORR still feels it needs to consult on why renewals costs are increasing and efficiency falling instead of rising.

This is not a new problem. This column went public on the rise of infrastructure costs following privatisation in July 2001 when I published a comparative study of major projects going back to 1966. It showed that current schemes were costing between two to three times what British Rail would have paid for similar work.

With typical modesty I dubbed this ratio the Ford Factor, with a provisional value of 2.5. Subsequently this was raised to pi.

On 26 November 2002 the Chairman of the Strategic Rail Authority, Richard Bowker, gave evidence to the Parliamentary Transport Committee. The transcript includes the following exchange.

Question: ‘Could I just move on to costs, because clearly these are a matter of some concern. Do you agree with Mr Roger Ford, in Modern Railways, that the cost of investment in the railway is now two to three times more than if British Rail were undertaking the same project calculated at today’s prices? Do you accept that analysis at all?’

Mr Bowker: ‘With respect to Mr Ford, who is a well-known and respected observer of this industry, I think it is an overly simplified analysis, because at the time that British Rail was carrying out various investments it did not have to take into account some of the things that are now required to be taken into account, such as the impacts on revenue, it treated costs in a different way.

‘However, the central theme of Mr Ford’s point is valid, which is that there has been, or appears to have been, a spiral of cost, not just in terms of projects, but projects and in terms of operating costs. I think the whole industry recognises that it has to get on top of that; if we do not get on top of that we know we risk making rail uncompetitive. So as a general point, has the cost of projects gone up, yes, that is the case. Do we have to control it? Absolutely.’

Obviously, with privatisation less than 10 years old, the Ford Factor was a touchy issue. I would tease Richard Bowker with it at conferences and he finally conceded that it existed. In doing so he made the point that what mattered was not the exact multiple but the fact that it was a multiple and not a percentage increase. 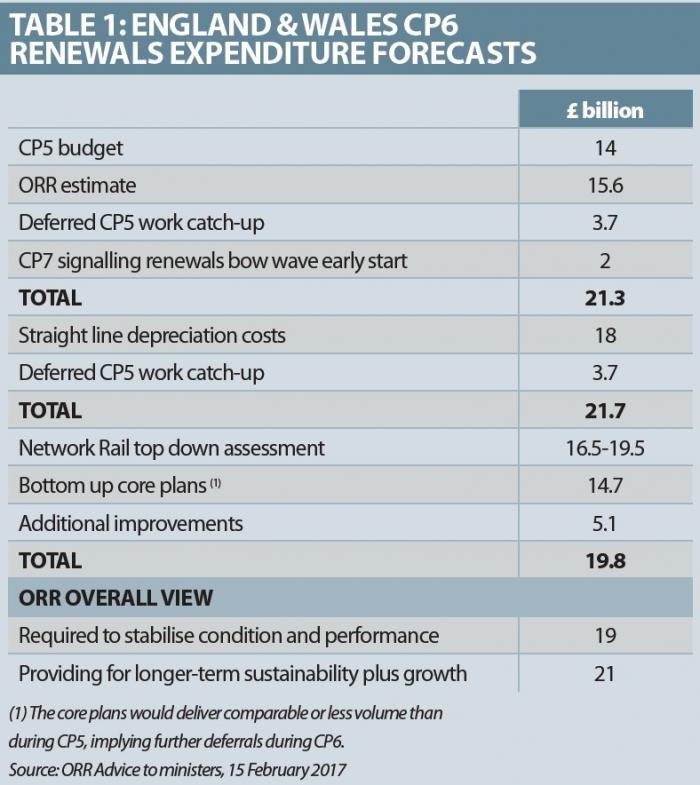 Anyway, subject to the satisfactory conclusion of these various belated studies, DfT ‘believes that it is likely to have funds available to meet reasonable requirements subject to reasonable efficiency savings and deliverability’. With that caveat, DfT expects to be able to confirm a final SoFA, with publication not later than 13 October (this year, I assume – Ed).

On maintenance expenditure, Network Rail’s core plans propose an increase from £5.1 billion in CP5 to £6.1 billion in CP6. In addition to the impact (literally) of traffic growth, electrification means there will be more infrastructure to be maintained. There is also a trend to deeper maintenance interventions to prolong asset life.

ORR has yet to analyse these core plans in detail, but its initial view is that they include more reactive maintenance, reflecting the constrained renewals spend over the same period. ORR estimates that £5.8 billion would be consistent with a sustainable level of renewals.

Back in the dawn of privatisation, Railtrack planned to spend more up front on renewals in exchange for falling maintenance costs in the longer term. A couple of decades on, ORR says renewals are typically more expensive in cash terms than the maintenance activity that would otherwise be required. But while lower renewals volumes might reduce short-term cash pressures, this policy will tend to reduce asset reliability, with consequent impacts on passenger and freight performance and generate the need for more reactive (as in ‘it’s broken’) maintenance.

‘There needs to be a significant increase in the volume of renewals undertaken in CP6, to reverse the impact of the deferrals that have taken place in CP5, meet the pressures of growing traffic and address the condition of long-lived assets. Using current unit rates, but with increased volumes, this would imply around £21 billion of spend.’ - ORR Advice to Ministers, 15 February 2017