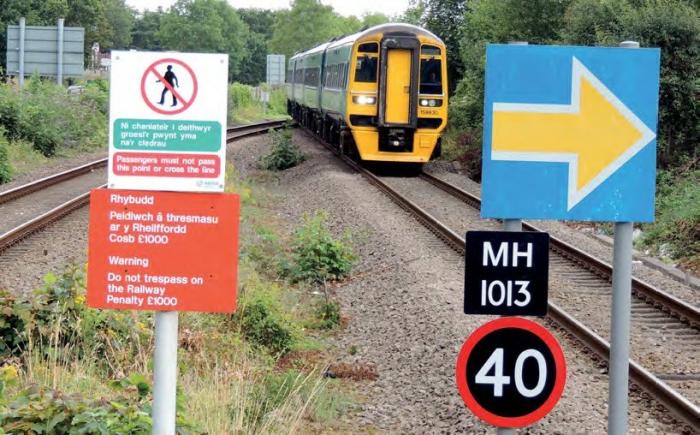 ETCS testbed: a pair of Class 158s approaches Welshpool with a service for the Cambrian coast on 29 July 2017. Steve Hobson

When Network Rail summons the industry en masse to York to hear the Transport Secretary making an announcement on a new strategy for the digital railway, you might have expected some significant revelations. When it was all over, the reaction among the railway press was ‘is that all?’ For example, I had been expecting an announcement on the next roll-out of the European Train Control System (ETCS), expected to be the East Coast main line south of Peterborough. The European procurement process has already begun, but ECML ETCS was mentioned only in passing.

However, if you looked behind the flimsy façade there was some nuanced political lobbying to be found. And the supporting documentation outlined the strategy for the next three Control Periods. And I also gained an insight into technical policy.

For an example of nuance, take this opening paragraph of the DfT’s press release. ‘Transport Secretary Chris Grayling and Network Rail Chief Executive Mark Carne will today launch Network Rail’s Digital Railway Strategy and commit to ensuring all new trains and signalling are digital or digital ready from 2019.’ Ho-hum was my first reaction: surely current new trains and signal interlockings are ‘digital ready’ as supplied. Well, yes, for rolling stock and sort-of for signalling (as I shall explain). But the key point is that the Transport Secretary has ‘committed’, which means the Treasury too.

TRAINS Mark Carne’s definition of ETCS-ready for trains is that the wiring must be in place. This is not a trivial issue since it includes interfaces with the traction and braking system in addition to the on-board equipment. This is the minimum fitment that will be mandated in franchise invitations to tender and agreements.

But since most train builders are part of groups also supplying ETCS, a manufacturer might propose that for a few dollars more we could put in empty ETCS cubicles as well as the wiring to simplify retrofitting. In such a case the whole life benefit could be assessed.

That is one for rolling stock funders to develop. More directly, as Network Rail develops the business cases for signalling renewals, the cost impact of building in provision for digital railway should not prejudice DfT’s authorisation of the scheme. For example, does cost include the integration of the Radio Block Centre (needed for ETCS Level 2) with the interlocking? To be ETCS-ready it will have to.

Network Rail’s line continues to be that the cost per Signalling Equivalent Unit (SEU) of what is termed ‘conventional’ multiple-aspect colour light resignalling (MAS) is ‘unaffordable’. For the conventional resignalling in the CP6 (2019-24) work-bank the average cost per SEU is assumed to be £420,000.

If conventional signalling is replaced by ETCS Level 2 the assumed rate is £300,000 per SEU.

That ETCS costs will be lower than MAS has been confirmed in the estimates for the resignalling schemes at Crewe and Feltham proposed for CP6. The figures are supported by the contractors in the Digital Railway Programme’s Early Contractor Involvement (ECI) group.

Now, of course, ETCS is another case of responsibility for the tricky bit of infrastructure kit being offloaded onto the traction and rolling stock engineers. In this case the costs of the signals are transferred to the trains.

Which brings us back to the importance of that ministerial ‘commitment’ to all new trains being ETCS-ready. Government funding for Siemens’ contract to fit the current freight locomotives with ETCS has already been announced. Other than retro-fits, Network Rail will just have to pay for its own ETCS equipment.

Nor should the location for the announcement be ignored. In his introduction, Mr Grayling declared ‘it seems fitting that we should be here in York, which could be one of the first cities to benefit from a digital inter-city railway on the trans-Pennine route’.

Network Rail is still working on its proposals for the trans-Pennine route. It is now being emphasised that this will not be a British Rail-style total route modernisation but a series of upgrades. And Mr Grayling did use the ‘E’ word.

But politically it is important that investment in railways in the North is seen to be happening and, according to informed sources, Mr Grayling has made it clear to Network Rail that he wants to see some physical activity on the route starting next April.

As every railway manager knows, a hi-vis jacket and some work on the track make an irresitible photo opportunity for any politician.

Talking to the railway press afterwards, David Waboso, Managing Director Group Digital Railway, summed up the significance of the event. For the first time the Chief Executive of Network Rail and the members of the Rail Delivery Group had been in the same room as the Transport Secretary agreeing on the way forward. It seems ungracious to point out that while an achievement,

BEST USE OF FUNDS

‘That is why I want the industry to make plans for all signal renewals and upgrades – from next year – to be digital, or at least digital-ready. This will mean we are making best use of funds already earmarked for renewals, and we will also consider the best way to use the franchising process.’ Chris Grayling, Transport Secretary, 10 May 2018 it is dependent on the ephemeral existence of ministers, as a successor could well have different ideas.

So much for the political aspects of the event. In the supporting documentation provided by Network Rail there were some details of the ETCS roll-out strategy and associated costs worth reporting.

Given the limited UK experience to date, the cost of ETCS Level 2 is hard to pin down. There is some limited data in the form of the Cambrian pilot scheme, Thameslink, Crossrail between Paddington and Airport Junction and the aborted tendering for north of King’s Cross. However, these are small-scale one-offs.

But for ECML South (King’s Cross-Peterborough) the best estimate is £300,000 per SEU.

I’m not sure whether per SEU will be a valid parameter for an ETCS Level 2 ‘signals away’ railway, as you will presumably have fewer SEU but more equipment, such as the Radio Block Centre, in the cost.

While the European benchmark in my table is encouraging, attempts by the Office of Rail & Road to benchmark infrastructure costs in previous Control Periods are not confidence inducing. I suspect we won’t really know what it costs until ECML South has been completed. But note that the new business plans include a 32% provision for optimism bias. And the contractors are confident that a sustained long-term workload should see unit costs come down.

Network Rail has developed a programme for the implementation of ETCS covering the next three Control Periods – CP6 (2019-24), CP7 (2024-29) and CP8 (2029-34) David Waboso has already said the emphasis in CP6 will be on the introduction of Traffic Management and Connected Driver Advisory Systems to generate early benefits at low cost. At which point I’ll have a mini-moan about the tendency to make ‘Digital Railway’ and ETCS interchangeable, which can be confusing and misleading, although the feature on page 56 should help.

What follows is all about ETCS. CP6 will focus on a line of route deployment, where funding is in place for the early development phases of ECML South. On this route ETCS will be implemented in a series of ‘sub-tranches’ working outward from the two-track section over Welwyn Viaduct.

Most of the trains that will be running south of Peterborough are already ETCS-ready or fitted; further fitment will not be required until resignalling starts to extend further north.

Also in CP6, Chris Grayling is already promoting the trans-Pennine route upgrade as the first digital inter-city railway (yes, I know it’s a content-free sound-bite – but I have been told we need to keep the politicians on side).

Five other schemes in CP6 to be ‘ETCS enabled’ will include major signalling renewals planned for Crewe, which will be linked to the transition between HS2 and the classic network. Another large renewal scheme at Feltham will provide the basis for the roll-out of ETCS on the Wessex route.

In CP7 the focus will switch to regional deployment of ETCS, mainly in a broad band either side of the trans-Pennine corridor plus Scotland.

In the south the expectation is that ‘the whole track 40 miles from Waterloo will be ETCS within 10 years, providing the potential for a metro-style service into Britain’s biggest commuter station’.

Linking the regional routes in CP8 will result in the creation of a national network. According to Mark Carne, ‘within 15 years, we could expect 70% of journeys to be ETCS and Traffic Management enabled’.

This plan should be developed in detail by 2021 ready to feed into the funding requirements for CP7 and CP8. But before we all get carried away at such a coherent plan we must heed TS Eliot once more.

As he wrote: ‘Between the idea and the reality, Between the motion and the act falls the Shadow’. And the shadow is the fact that which infrastructure enhancements are chosen to go ahead is determined by the Department for Transport, where memories are long.

Finally, the technical detail. While I have written about ‘resignalling’, David Waboso makes the point that you won’t get the full capacity and other benefits from ETCS Level 2 if you simply overlay it on the existing signalling design. Since Level 2 still depends on the fixed block lengths, the constraints this imposes will be perpetuated.

As a result, resignalling for ETCS will be a redesign based on the performance of the trains and service patterns on the route. Drawing a parallel with the Victoria Line, where there were ‘loads of stage-works but we knew what the end-stage was’, ETCS will be designed with multiple intermediate blocks within the existing block section.

These intermediate blocks will be designed to optimise capacity for ETCS-equipped trains.

Where on Thameslink ETCS has been overlaid on conventional signalling, future ETCS schemes will ‘underlay’ the railway. While the resignalled section might need to open with colour-light MAS for non-ETCS fitted trains, the provision will already be there for ETCS-equipped stock to exploit the shorter block sections which will allow trains to run closer together.

Feltham and Crewe will be the first schemes to be redesigned in this way. They will open with MAS, but when ETCS-fitted trains start running there is no additional cost to provide full Level 2 ETCS.

I suppose another term for this could be passive provision. It may introduce an extra cost, but David Waboso believes these will be ‘dwarfed’ by the benefits of the sustained roll-out programme. And in any case the Transport Secretary has committed to all new signalling schemes being ETCS-ready. 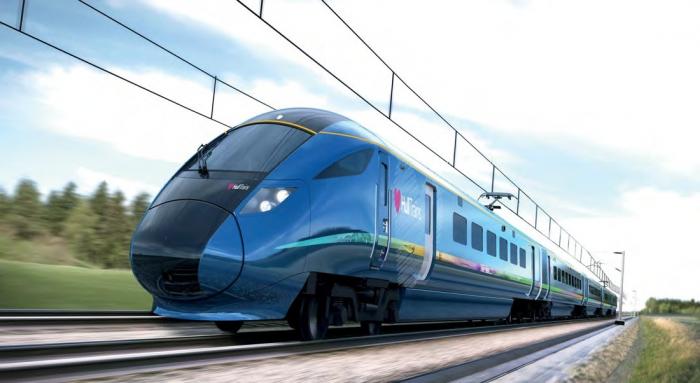 ETCS-ready railway: Hull Trains is purchasing new Hitachi bi-modes (pictured), part of the multi-operator fleet renewal programme that makes the East Coast an ideal route on which to implement ETCS.