Standoff between Stagecoach and DfT 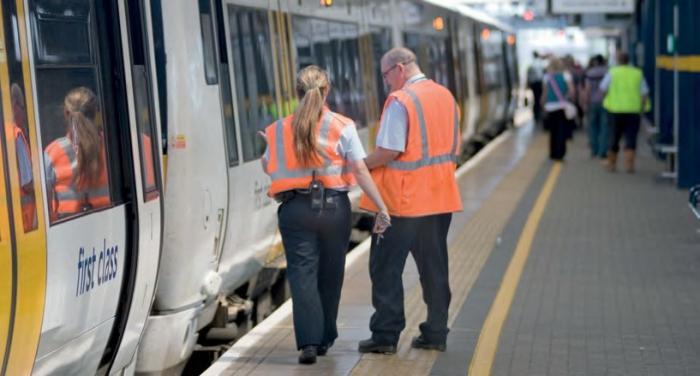 How do we ensure their pensions get paid? Southeastern staff at Ashford International confirm two Class 375 sets are coupled before the units carry on towards London. Tony Miles

STAGECOACH HAS maintained it is unwilling to take on the full level of pensions risk demanded in upcoming franchises. However, the Department for Transport has said the approach adopted for the competitions means operators ‘will be exposed to no additional risks or demands’ compared to current operators and that the agreed risk-sharing mechanism in fact reduces financial risk to bidders.

In a statement on 2 May discussing its bids for the East Midlands, South Eastern and West Coast Partnership competitions, Stagecoach said: ‘We refused to accept the potential pension risks that the Department for Transport requires operators to bear in relation to the three new franchises. The full extent of these risks is unknown, but we estimate them to be well in excess of £1 billion for the three franchises.’

Elaborating, Stagecoach said the Pensions Regulator (tPR) ‘considers there to be a deficit of up to £7.5 billion across the franchised train operators and is seeking significant additional contributions to the scheme which are as yet unquantified’. In the absence of any contractual protection, Stagecoach believes this could lead to the operator of any new rail franchise having ‘an exposure to substantial additional pension contributions’.

Following tPR’s request for ‘substantial and not yet fully quantified increases in contributions’ to the Railway Pension Scheme (RPS), Stagecoach said it took specialist actuarial advice. ‘Following careful consideration of the protection offered by the Department for Transport, plus a review of potential downside scenarios, the outcomes showed that the potential additional cost and risk were substantial’ the company states. ‘We therefore, as a responsible business, included increases in pension costs in our bid forecasts and sought additional contractual protection beyond that offered. The additional contractual protection sought was to ensure that in the event a bid was successful, the relevant train operating company’s exposure to increases in pension contributions to RPS would be limited to a manageable level which it would be reasonable for a train operator to bear should those circumstances arise.’

The company says its position not to take on ‘unknowable risk’ was supported by its partner bidders, Virgin and SNCF (French Railways) for the West Coast Partnership franchise and Alstom for South Eastern.

In a letter to House of Commons Transport Committee Chair Lilian Greenwood dated 7 May, Transport Secretary Chris Grayling explains prospective franchise bidders were made aware of tPR’s investigation into a deficit in the RPS in October 2017.

An illustration of the potential scale of the deficit within the East Midlands section of the RPS was first shared with bidders for that franchise in July 2018. Mr Grayling explained feedback from bidders led to the release of ‘a set of focused rebid instructions that covered pensions as well as other issues’ in October 2018.

‘On 21 November 2018 Stagecoach submitted a bid which included a non-compliance statement in which Stagecoach admitted that the bid was non-compliant with the ITT (Invitation to Tender)’ Mr Grayling wrote. ‘The Department then completed its evaluation process, confirming in writing on 9 April 2019 that Stagecoach was non-compliant and that, as a consequence, its bid was disqualified.’ Mr Grayling added that the decision was not taken lightly, but that Stagecoach’s tendered price ‘could not be compared on a fair basis with other compliant bids’ and therefore the Department believed it had no choice but to reject the bid.

In a statement on 8 May, Abellio said: ‘For many decades ensuring that the Rail Pension Scheme is fully funded has been an ongoing responsibility for everyone involved in running the railway. Abellio is working constructively with the Pension Trustees, Rail Delivery Group, employee representatives, the Department for Transport and the Pensions Regulator to maintain the pension scheme for the long term.

‘Abellio, along with many other multi-national organisations who have submitted compliant bids for current competitions, are satisfied that the protection mechanism put in place by the Department for Transport suitably balances all parties’ risk.’