While the mainstream media talked of Arriva being ‘stripped’ of its Northern franchise, that is to over-dramatise what happened. Rather than DfT forces storming Arriva’s Northern castle and putting its occupants to the sword, a starving franchise operator had no option but to lower the drawbridge and walk out, allowed to keep its shoes. 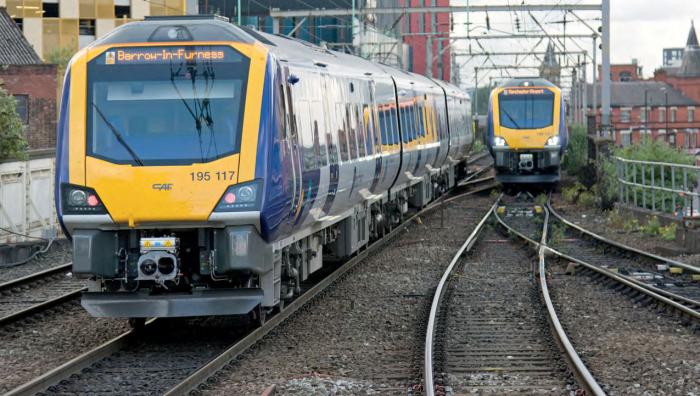 In fact, there were concerns that Arriva owner Deutsche Bahn, miffed at being told that German Railways wasn’t much good at running trains, might chuck the keys over the battlements and depart via a sally port. But as this column went to press the Operator of Last Resort (OLR) was due to add Northern to its portfolio from 1 March.

How had it come to this? It had been obvious since early last year that Northern was a genuine zombie franchise caught in a multiple squeeze. Indeed, according to informed sources, when the line management found out about the commitments in the franchise agreement it was immediately clear that, given the surrounding circumstances, they would be undeliverable.

Northern has been through a hard time. First there was the late running infrastructure, particularly electrification. This segued into the May 2018 timetable crisis. Meanwhile, the running sore of strikes over the guard’s duties was ever present.

Most recently, recovery of the timetable was hampered by the late delivery of new trains and the associated impact on capacity and driver training. Delays in the Castlefield corridor were hammering performance.

True, revenue was rising, but it was falling short of budget. In parallel, costs from the various problems were mounting.

Back in October 2019 Transport Secretary Grant Shapps told the Transport Select Committee that he had asked Arriva Rail North (ARN) and OLR for proposals for the future management of the troubled franchise. But, as I have explained before, with a franchise agreement based on rising premium payments or falling subsidies, once revenue falls behind forecast it is almost impossible to catch up.

While operating performance was the overt issue, Government action was triggered by concern over the deteriorating financial position of ARN. In a statement on 9 January Mr Shapps reported that the most recent available financial information had confirmed that the franchise would be able to continue for only a ‘number of months’.

On 29 January came the expected announcement that OLR would be taking over. The only slight surprise was the date: 1 March. This urgency suggested the financial situation was worse than suspected.

You can find full details of DfT’s announcement in our news pages, including the immediate actions. Recovery is not going to be quick, simple or cheap.

Which is why OLR Chief Executive Robin Gisby and consultant Richard George, who was brought in by DfT after the May 2018 timetable fiasco to advise on Northern (‘Informed Sources’, April 2019), have allocated the first 100 days to developing a plan to recover the franchise.

OLR’s task is considerable. Implementing the resulting plan is likely to take a couple of years.

First on the to-do list is to try and sort out capacity in the Manchester area. As my colleague Tony Miles explained, (p74, September 2019 issue), the Castlefield corridor is the epitome of a problem where the only solution in the near term is to run fewer trains.

Transport Secretary Grant Shapps is looking to OLR to work with Network Rail ‘and build a comprehensive new master plan to review congestion around Manchester’. But which services to cut is predominantly a political issue, since other operators running through Manchester have contractual access rights and franchise commitments.

Nor is Manchester the only issue. DfT notes that further interventions around Leeds will also be considered.

‘Across the country a number of franchises are failing to provide the reliable services that passengers require and there are legitimate questions on whether the current franchising model is viable.’

So why is calling in OLR any different to agreeing a Direct Award franchise agreement with the incumbent operator? LNER provides some answers.

First of all, the management and staff are freed from the tyranny of financial commitments in a franchise agreement three or four years old and overtaken by events. We tend to forget that staff have been TUPE’d from pillar to post under successive replacement franchises while expected to remain committed to ‘the job’. Improving staff working conditions is among OLR’s immediate priorities.

Counter-intuitively, ‘state control’ brings flexibility and releases innovation. Would a franchise under DfT’s financial cosh have been able to paint an IC125 in its original livery and run a farewell tour as LNER did – generating positive media coverage and good will?

Instead, OLR treats its franchises like normal businesses. The franchise aims to make a surplus. Some of this is invested back into the franchise and the remainder paid to DfT as a ‘dividend’.

One of the problems in detecting incipient franchise failure is the latency in the financial report process. Thus SWR did not post its results for the year to 2019 until early this year. These showed an onerous contract charge, an operating loss of £138 million and premium payments to DfT of £250 million. Note that the OCP is the maximum that SWR can cost its owners, FirstGroup and MTR Corporation.

On 22 January, Transport Secretary Grant Shapps issued a statement confirming that SWR’s recent financial statements ‘have indicated that the franchise is not sustainable in the long term’. The combination of ‘poor operational performance’ and slower revenue growth meant SWR’s financial performance was ‘significantly below expectation since the franchise start in August 2017’.

Despite this, SWR had ‘not yet failed to meet their financial commitments’. However, Mr Shapps warned: ‘my Department will ensure that SWR are held to their financial obligations under the current franchise’. In other words, as with VTEC, First/MTR will continue to run the franchise until the Parent Company Support runs out.

Meanwhile, continued Mr Shapps, DfT is preparing contingency measures required under the Railways Act 1993. Options include ‘a new short-term contract with SWR, with tightly defined performance requirements’ or transferring the franchise to OLR.

However, a revised contract with the incumbent owners contains a poison pill. Remember that Stagecoach was disqualified from bidding for South Western when it pointed out that DfT’s Train Service Specification was undeliverable because of infrastructure constraints.

Giving a short-term Direct Award might be seen in Perth as letting First/MTR off a hook they happily swallowed. Already taking court action against DfT over other franchise bids from which it was disqualified, Stagecoach might choose to open a second front.

And not mentioned in Mr Shapps’ list of SWR’s woes is the Central London Employment (CLE) revenue share/support mechanism in the franchise agreement. Changing work patterns have decoupled employment from ridership.

This means that with rising employment, SWR is having to pay DfT revenue share while earning less revenue. Greater Anglia is also caught in this MCAS of the rails, so DfT is not going to renegotiate.

Given all this, transfer to OLR seems likely. Because of the delay in financial reporting, we don’t know how fast SWR is burning through the PCS. Informed sources suggest another three months before the death ride ends.

ScotRail is also losing money, £8 million in the last report and accounts, and has increased its borrowings from its parent company. Under the terms of the franchise agreement, in the fifth year of the franchise, the Scottish Government and Abellio ScotRail must revisit cost and revenue assumptions and the associated subsidy requirements.

Under this ‘rebasing process’ the Scottish Government and Abellio ScotRail could agree terms to continue until March 2025, with subsidy levels based on revised revenue and costs. Alternatively, either party could issue a ‘no-rebasing notice’, franchise agreement subsidy levels applying until termination in March 2022.

A decision was required by 31 December 2019 and the Scottish ministers decided not to rebase the contract. According to Cabinet Secretary for Transport, Infrastructure and Connectivity Michael Matheson, the Government was not satisfied that the ‘significant increase in public subsidy’ required by ScotRail would generate ‘commensurate benefits for passengers, communities and the economy’. In other words, rebasing ‘would not secure the delivery of the policy objectives that underpin the current franchise’.

As Table 4 showed, ScotRail’s annual subsidy has risen from £247 million to £390 million over the last three years. That Transport Scotland refers to a ‘significant increase’ proposed for the rebased franchise suggests costs are continuing to rise faster than revenue.

TPE has been having a torrid time with late new trains and delayed driver training leading to cancellations and overcrowding. That said, when you include Network Grant, total subsidy has fallen over the last three years, if only by £1 million.

Judging by reports of overcrowding there is clearly suppressed demand, and when all the new fleets are in service ridership and revenue should rise.

However, as with other TOCs, such as Northern and Greater Anglia, we don’t know how the costs of the new fleets will affect the operators’ finances. Note in Table 4 that Great Western has gone from a premium of £87 million to a subsidy of £277 million while the Intercity Express Programme (IEP) fleet has been replacing IC125.

Meanwhile, DfT faces the quandary of what to do about Great Western and Southeastern. Great Western has a Direct Award franchise agreement which expires on 31 March. DfT’s aim was to negotiate a new Direct Award taking the franchise through to 2022 with an option to extend for a further two years.

Terms of the proposed new deal have yet to be agreed. It seems likely that it is a case of who blinks first over subsidy.

During the Great Western main line route modernisation programme, Great Western increased its profitability on the back of Schedules 4 and 8 payments from Network Rail for disruption to services. Now that the electrified timetable is in and running smoothly, that ‘free income’ cash flow will have diminished.

As for Southeastern, DfT’s franchising team ‘jumped the shark’ on the specification for the replacement franchise, including a bonkers requirement for the new operator to fund and procure a Traffic Management system and hand it over to Network Rail.

Eventually a protracted bidding process ground to a halt over pensions issues. Meanwhile, the latest of several Direct Awards runs out on 1 April this year. Another Direct Award seems likely.