Politicians, their advisers and their willing accomplices in the civil service have screwed-up pretty much every industry I have worked in. The classic example remains the White Paper ‘Defence: Outline of Future Policy’, published in April 1957.

Its aim was to achieve substantial reductions in both expenditure and manpower. And when it came to military aviation, Minister of Defence Duncan Sandys had a big idea: the manned fighter aircraft was obsolete, future air defence would be provided by guided missiles.

As a result, a series of advanced aircraft for which contracts had been placed, and with work underway, were cancelled. Fortunately the English Electric P1 Lightning was too far advanced and survived the cull. Perversely, as is often the case with these industry-wrecking decisions, Mr Sandys also cancelled the basis of his vision, the Blue Envoy ground to air-missile, while he was at it. 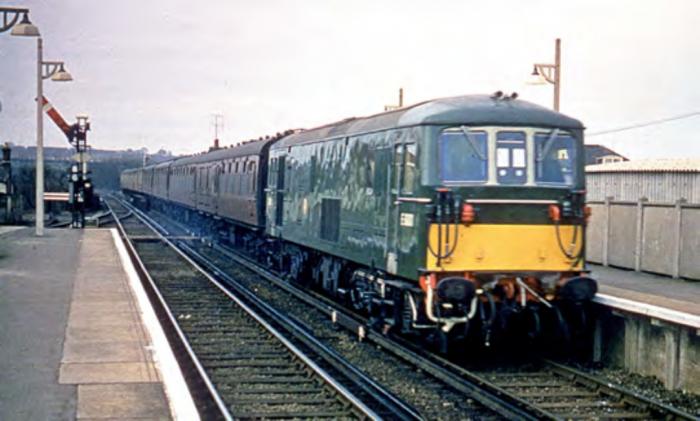 Headlined as ‘New improvements for rail passengers in Wales, the Midlands and the North’, the press release claimed the availability of ‘new technology’ meant ‘disruptive electrification works’ between Cardiff and Swansea, Kettering to Nottingham and Sheffield, and between Windermere and Oxenholme, will no longer be needed.

According to Mr Grayling, ‘technology is advancing quickly, and this government is committed to using the best available technologies to improve each part of the network’. In this post-modern railway, ‘new bi-mode train technology’ offers ‘seamless transfer from diesel power to electric that is undetectable to passengers’. Undetectable unless you are sitting on top of a 1,000hp MTU Vee 12, that is.

Lest we forget, the Southern Region pioneered ‘new bi-mode technology’ with the English Electric Class 73 over half a century ago. Only we called it an electro-diesel.

Anyway, with the railway industry also developing alternative fuel trains, using battery and hydrogen power, ‘we no longer need to electrify every line to achieve the same significant improvements to journeys, and we will only electrify lines where it delivers a genuine benefit to passengers’.

So we are back to DfT’s 2007 White Paper ‘Delivering a sustainable railway’. And, sorry to be picky, even DfT has conceded that under diesel a bi-mode can’t offer electric journey times.

Applying the term ‘new improvement’ to depriving South Walians of the long-term benefits of an electric railway is Orwellian even by the average Transport Minister’s loose relation with reality. Set against the Government’s parallel proposal to ban diesel cars, telling travellers arriving at Swansea, ‘You’ll love the smell of diesel fumes in the morning, it smells of improvement’, is beyond surreal. 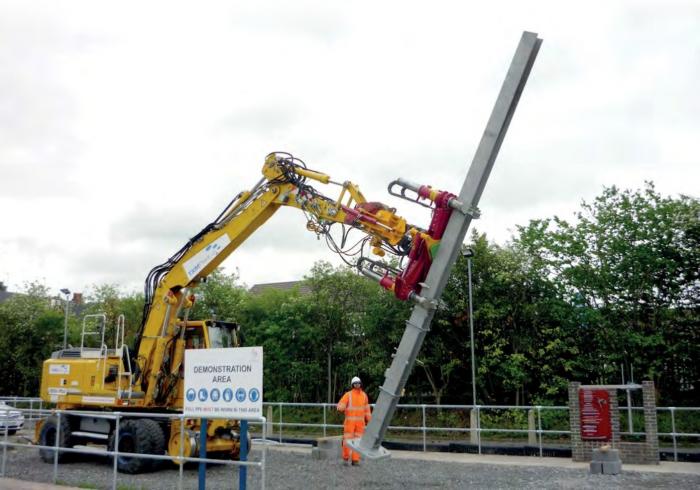 This is how it’s done: demonstration of mast erection on Chase line, June 2017.
Courtesy Network Rail 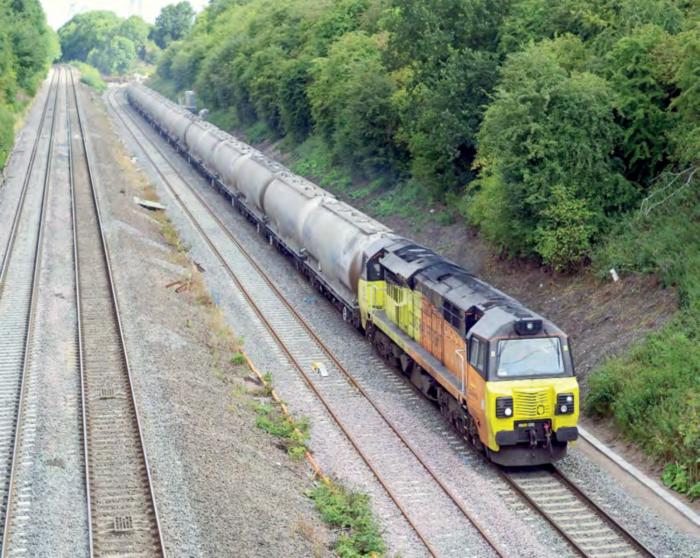 Kettering to Corby: redoubling of the track prior to electrification is almost complete. This is Kettering North on 1 August 2017, with No 70802 heading the twice-weekly cement train that runs on the Corby route.
Mick Alderman 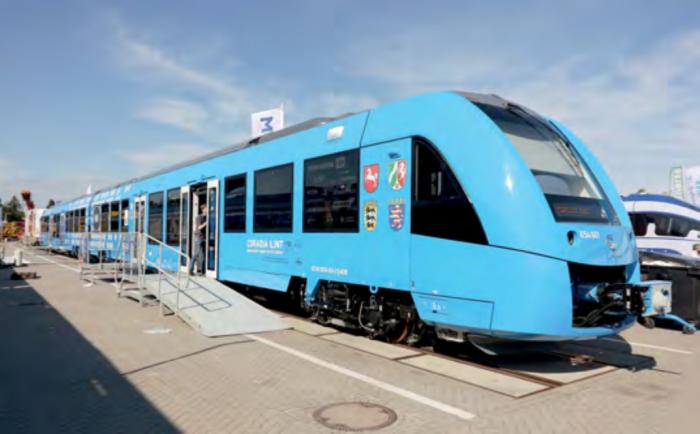 At first reading, there was the implication that Cardiff-Swansea was getting ‘new’ when, in fact, the service will be operated by the same Great Western fleet of Hitachi Class 800 electro-diesel bi-mode multiple-units already being delivered.

As we all know, the nine-car Hitachi Class 801 electric multiple-units on order were converted to bi-mode following the delays to the Great Western Electrification Programme (GWEP). Interestingly, tucked away in a DfT spreadsheet supporting the fifth annual report of the Government’s Infrastructure & Projects Authority was the revelation that the cost of the Inter-city Express Programme has increased by £300 million. This follows the adoption of the all-bi-mode Great Western Railway fleet, plus the ‘unmuzzling’ of the de-rated engines and the delay to the test programme waiting for the overhead line equipment (OHLE) to be erected and energised.

On the Midland main line, electrification to Kettering and Corby is still going ahead, but the remainder of the scheme is cancelled. As a result, the next East Midlands franchise, just put back to August 2019, will be required to procure a fleet of bi-modes for service from 2022. According to DfT this new fleet will improve journeys sooner, ‘without the need for wires and masts on the whole route’.

DfT is forecasting journey time reductions between London and Nottingham and Sheffield ‘by up to 20 minutes in the peak’ together with over 1,000 additional seats an hour. Since even with the Class 800 engines at the full commercial rating it looks as though the bi-mode has to be thrashed to get close to IC125 acceleration and 125mph top speed, the bulk of those 20 minutes will come from the already-announced infrastructure upgrades plus cutting out stops south of Kettering.

Incidentally, confirmation that the standard five-car Class 800 is a bit of a no-go showboat under diesel power was provided by the news that Hitachi is proposing a version with four instead of three engines for the East Midlands requirement.

Electrification of the 10-mile branch line between Oxenholme and Windermere has also been cancelled. According to informed sources this was on aesthetic grounds and followed Mr Grayling’s reading of Wordsworth’s great poem which readers will recall from their schooldays:

I wandered lonely as a cloud

That floats on high o’er vales and hills,

When all at once I saw a crowd,

A host, of grossly over-engineered

You may think I jest (I do – Ed), but Chris Grayling said in his cancellation statement that his bi-modes with everything policy means ‘there is no need to construct intrusive wires and masts in this National Park’. My, how my chums in the Goring Gap resistance movement jumped on that concession.

And once again the Luddite policy is justified on the grounds that journeys between Windermere and Manchester Airport will be improved sooner ‘and with less disruption to services and local communities’. The DfT statement added ‘four direct services a day in each direction between Windermere and Manchester Airport will be introduced with the May 2018 timetable’ and from December 2019 the service will be provided by ‘brand new’ trains.

In addition, Northern is to explore the possibility of deploying ‘alternative-fuel’ trains on the route by 2021. This will include service trials of an alternative-fuelled train, further removing ‘the need to construct intrusive wires and masts in the National Park’.

These three dates caused some confusion. As far as I can tell, the four direct services in the May 2018 timetable will be provided by Porterbrook’s Class 769, aka the Class 319 Flex bi-mode conversion. Northern’s acquisition of these units was announced in December 2016.

This is the ideal application for bi-modes. On the main line you blitz along under electric traction then potter down the branch line with the diesels enjoying an unstressed life.

So what about the ‘brand new trains’? These must be Northern’s CAF DMUs running under the wires.

In a separate written answer to Parliament, Rail Minister Paul Maynard said of these trains that they will have ‘more seats and better on-board facilities including air conditioning, toilets, free wi-fi and plug sockets’. But, he added, this was ‘subject to business case’. More cognitive dissonance.

Finally, there’s the trial of an ‘alternative-fuelled’ train on the Windermere branch. This sounds all very vague. According to Mr Maynard, ‘Northern will also begin work to explore the possibility of deploying alternative-fuel trains on the route by 2021’. This would ‘improve comfort and on-board facilities for passengers whilst protecting the sensitive environment of this World Heritage Site’.

At Railtex, Alstom staff told me the company is not interested in the bi-mode market but was very keen to talk about its iLint hydrogen fuel cell powered version of the Coradia diesel multiple-unit platform.

Based on trial running with the iLint prototype in France, Alstom claims the performance matched that of the diesel-powered Coradia. Maximum speed is 90mph, with a claimed range of 375-500 miles between refills.

With the new Widnes plant as a base, it looks to me as if Manchester Airport-Windermere would be the ideal demonstration route for the bionic duckweed revolution. Alstom has been offering a UK gauge 125mph EMU and was FirstGroup’s preferred bidder for the East Anglia franchise.

Mr Grayling told the FT ‘We don’t need to electrify all of every route. There are places that are built in Victorian times where it is very difficult to put up electric cables. If there are bits of the trans-Pennine network that are complicated to do and we have a bi-mode train we can say, “Here is a section we can have a diesel”. We will be electrifying trans-Pennine but we can do it in a smarter way’. 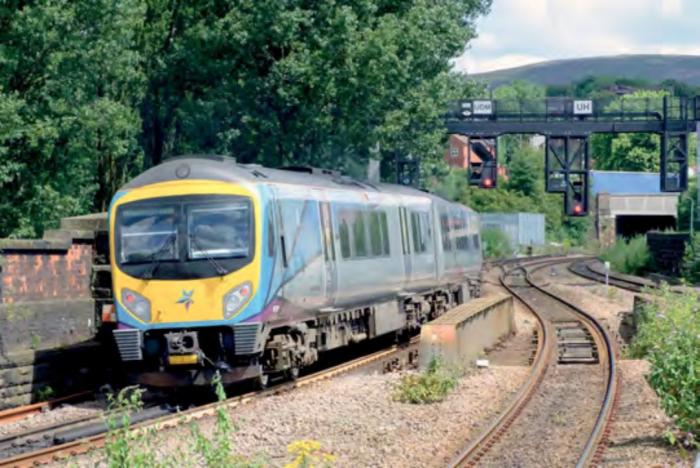 What future for the trans-Pennine route? No 185128 passes through Stalybridge with the 12.33 Manchester Airport to Newcastle service on 12 July 2017.
Russell Wykes

Let’s just recap. Network Rail’s June 2014 Enhancements Delivery Plan for CP5 saw electrification from Stalybridge Junction to Leeds commissioned in December 2018. Having been paused briefly during the Hendy Review in 2015, the completion date was reset to ‘by the end of 2022’.

Discontinuous electrification is, of course, yet another example of infrastructure engineers seeking to cover up their own shortcomings by dumping a bodged solution on the rolling stock engineers (Remind me of your training? Ed). With the pantographs going up and down and the engines starting and stopping during a journey, the scope for failures is transferred from Network Rail to the train operators, as is the cost of maintenance.

Over a hilly route like trans-Pennine, the performance may well go to pot where diesel power cuts in at the start of a gradient. A reader had an ingenious, if tongue-in-cheek, solution to this problem: just electrify the uphill sections.

Mr Grayling’s proposed downgrading of the trans-Pennine electrification brought an angry response from the mayor of Manchester, Andy Burnham, with the hurt exacerbated by the Transport Secretary’s endorsement of Crossrail 2 two days later. In a letter to Mr Grayling, Mr Burnham expressed ‘surprise and disappointment’ about the potential ‘downgrade’ of the electrification of the Manchester-Leeds route.

Not surprisingly, the Welsh Government was not exactly chuffed with the Cardiff-Swansea cancellation either. Cabinet Secretary for Economy & Infrastructure Ken Skates wrote to Chris Grayling on 21 July, seeking clarification on a number of issues following the ‘extremely disappointing’ cancellation decision. Mr Skates noted that funding for the electrification scheme was announced in 2012 and restated in 2014 by former Prime Minister David Cameron. ‘For the UK Government to announce the cancellation of this scheme at this stage and through the press, with no prior warning, was hugely disappointing.’

The UK Government had previously committed £105 million for the initial electrification between Cardiff and Bridgend. Mr Skates noted the announcement did not describe how that funding would be allocated to the Welsh Government following the cancellation. In any case ‘the long-awaited proposals to devolve powers to Welsh ministers over rail infrastructure should be progressed with immediate effect, alongside a fair and proportionate funding settlement’.

Mr Skates added that he would welcome a commitment from the Transport Secretary that the estimated £700 million to deliver electrification to Swansea ‘is instead ring-fenced for projects in Wales’. The phrase ‘fat chance’ comes to mind. 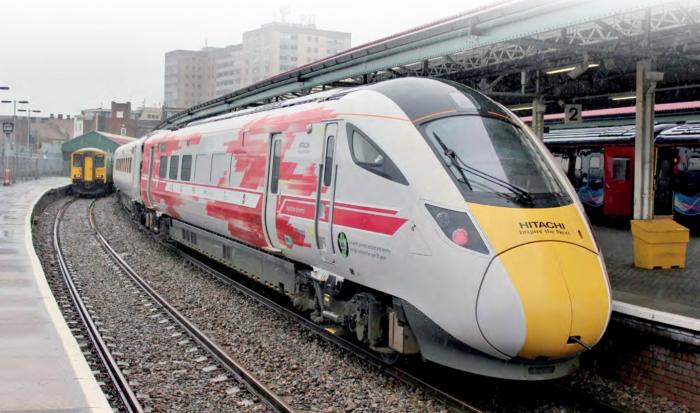