At the heart of the change is a reconfiguration of Midland main line services and the introduction of the new EMR Electrics service linking London St Pancras and Corby operated by Class 360 EMUs transferred from Greater Anglia. The half-hourly service will operate between 06.00 and 22.00 but with significantly earlier and later services too. All services will call at Luton Airport Parkway, Luton, Bedford, Wellingborough and Kettering. Network Rail’s Midland main line upgrade is extending electrification northwards from Bedford and creating capacity for a sixth path per hour out of St Pancras, which will be used by the Corby service.

The 21 Class 360s are due to transfer from Greater Anglia to EMR in August, allowing driver training to take place before their introduction in December; a new train crew depot will be opened at Kettering concurrent with the EMR Electrics service starting. Prior to the transfer EMR will work with its sister Abellio franchise to cycle the ‘360s’ through King’s Heath depot at Northampton, where Siemens will modify them for 110mph operation. The King’s Heath facility previously carried out a similar uprating from 100mph to 110mph for the Class 350 Desiro EMUs operated by West Midlands Trains. However, the ‘360s’ will only be able to take advantage of this uprating north of Bedford until the overhead wires southwards to London have been modified by Network Rail for use by electric trains at more than 100mph, currently pencilled in for completion in December 2023.

In its timetable consultation documentation EMR notes some ‘360s’ will initially enter service in an unrefurbished state, with 3+2 seating in standard class and small first class areas. The operator plans to award a refurbishment contract for interior work in early 2020, with this work providing a 2+2 layout in standard class and first class sections with 2+1 seating, as well as free Wi-Fi, new seats and power sockets throughout.

Maintenance of the EMR Electrics fleet will be carried out by Siemens at Bedford Cauldwell depot under a Train Services Agreement (TSA), with some work required at the site to provide the necessary facilities for this. However, the fleet will mostly stable overnight at Cricklewood and at the new electric stabling facility being built by Network Rail at Kettering.

The EMR Electrics service will reintroduce peak calls at Luton and Bedford which were removed in May 2018. Consequently, the ‘Thameslink Express’ services which currently call only at St Albans, Luton and Bedford at peak periods will make additional calls at Harpenden as well as Leagrave (southbound in the morning) and Flitwick (northbound in the evening) from December 2020. 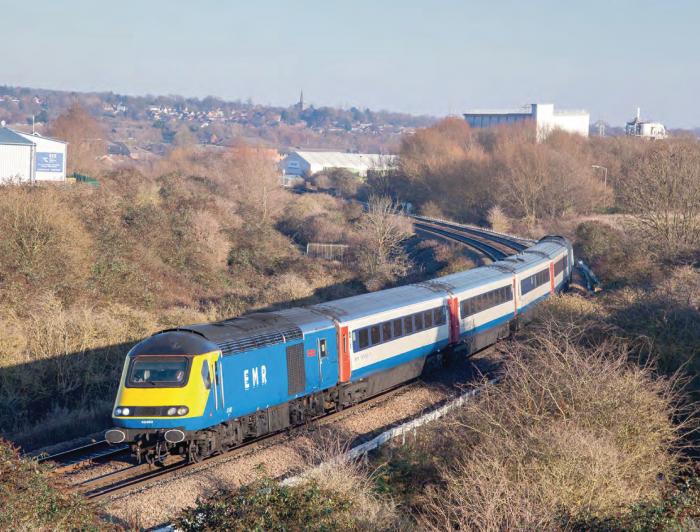 The December 2020 timetable will see four EMR Intercity services per hour in the remaining paths out of St Pancras. Two will run to Sheffield, with both calling at Leicester, Derby and Chesterfield and one at Loughborough, East Midlands Parkway and Long Eaton. The other two will run to Nottingham, calling at Kettering, Market Harborough and Leicester, with one service each hour also calling at Loughborough, East Midlands Parkway and Beeston. 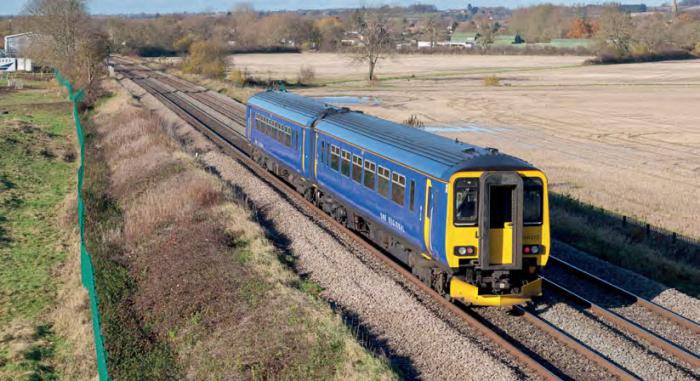 Interim livery: with the regional fleet in a state of transition, EMR’s DMUs are currently sporting a variety of colour schemes. No 156413 passes Sawley with the 2A34 11.39 Newark Castle to Matlock service on 18 November 2019.
Steve Donald

EMR promises faster journey times across the day but particularly on morning peak services from Sheffield into London as the removal of stops allows an improvement of up to 30 minutes. Earlier arrivals into and later departures from London and consistent departure times across the day are also promised, with connections between the EMR Electrics and EMR Intercity services at Kettering. Summer Saturday services to Scarborough will cease but weekend workings to York will continue, while through London services to Langley Mill and Alfreton via a reversal at Nottingham will also cease, replaced by additional EMR Regional services.

Current plans envisage the withdrawal of EMR’s HSTs at the end of 2020, with Intercity services solely operated by Class 222 Meridians supplemented by the four Class 180s currently with Hull Trains. However, it is understood the trial of a 2+4 HST on London to Sheffield services in early December was to determine if such a formation could match the sectional running times of a Meridian to provide contingency options. The ‘180s’ are not currently gauge cleared north of Chesterfield into Sheffield via Dore, meaning some gauge clearance work would be required or the sets would need to be confined to operating south of Derby and Nottingham only.

Although the major timetable change for EMR Regional services is planned for December 2021, changes in December 2020 include the extension of Crewe to Derby services via Nottingham to Newark Castle. This will see the Matlock to Newark service cut back to Nottingham, together providing an additional service each hour between Derby and Nottingham. Leicester to Lincoln services will also run through to Grimsby every two hours.

EMR is due to receive its first Class 170s from ScotRail during 2020, with two three-car sets arriving in March and a further three in June. These will be introduced into service once driver training is completed and dependent on where driver competence can be easily maintained, with one possibility being their deployment first on the Robin Hood line from Nottingham to Mansfield and Worksop. While they are likely to receive EMR livery prior to their introduction, a full interior refurbishment including provision of Wi-Fi, seat-back tables and plug sockets will not take place until 2021 when EMR receives further ‘170s’ cascaded from West Midlands Trains. As we presaged last month (p81), the transfer of Turbostars from Govia Thameslink Railway to EMR is contingent on GTR sourcing replacement stock to operate the Uckfield and Marshlink services.

The most immediate change on EMR Regional services is in the New Year when single-car operation will be ended. Eleven Class 153s will be retained but these will only be used to strengthen services operated by Class 156/158s which are compliant with Persons with Reduced Mobility (PRM) regulations. Two pairs of ‘153s’ will be used as the strengthening portion for Nottingham to Liverpool services, with others used for targeted strengthening of peak services, including on the Robin Hood line and between Nottingham and Lincoln. Hired-in ScotRail unit No 156503 was to return north at the timetable change in December, replaced by No 156416 from Greater Anglia, the first of nine ‘156s’ to transfer from the sister Abellio franchise.