For contractors, ignorance is far from bliss 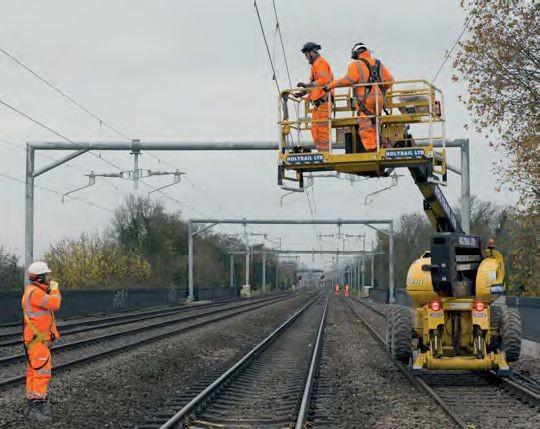 Electrification: projects such as this have a long lead time.
Courtesy Network Rail

My default attitude to politicians was set one day early in 1965 when I stood at the window of my second floor office in English Electric House, on the corner of Strand and Aldwych, and watched workers from our Preston plant on a demonstration march against the cancellation of the TSR2 aircraft. Aviation was the first of the industries I worked in to be wrecked by Government and it would not be the last.

It may just be early-onset geriatric irascibility, but it does seem that with the present bunch we have reached a new nadir. As Terry Thomas (a post-war comedian and actor – Ed) might have remarked, the current transport team is an ‘absolute shower’.

With Network Rail now an arm of government, the Department for Transport introduced a major change to the Periodic Review process. For the first five Control Periods (CP) Railtrack (briefly) and then Network Rail had their income for each five-year period determined by the Office of Rail and Road.

Following the shambolic CP3, when the Department for Transport would not allow the short-lived Strategic Rail Authority to specify the services it was prepared to pay for and the Regulator assumed ‘same again’, to the discomfiture of the Treasury, DfT had to specify its aspirations and state the budget available. ORR would then check Network Rail’s sums and confirm that the books balanced.

DfT’s aspirations included infrastructure enhancements and, in theory at least, the railway manufacturing industry sector had a general idea of its workload over the coming five years. It could then plan the level of investment in physical and human resources likely to be needed. True, there was always the inevitable dip in workload at the start of a Control Period, although ORR could bring forward funding for Network Rail to mitigate the hiatus.

But with Network Rail an arm of government, since CP6, which began on 1 April this year, the Regulatory determination of Network Rail’s funding covers only Operations Maintenance & Renewals (OMR). Any new enhancements in CP6 will be specified and funded separately by DfT.

Given the various debacles in CP5, not least the Great Western Electrification Programme, it was known that funding for enhancement schemes in CP6 would be limited. The only committed scheme was the Trans-Pennine Route upgrade (TPRU), at a nominal £2.9 billion.

There was also the need to complete various CP5 schemes, totalling £8.5 billion, which had been deferred or delayed following the 2015 review of the enhancements programme by incoming Network Rail Chairman Sir Peter Hendy. These so-called ‘Hendy-tail’ schemes represent most of the assumed enhancements funding for CP6, estimated at £10.19 billion. In March 2018 DfT unveiled its Rail Network Enhancements Pipeline (RNEP). This is intended ‘to provide information for all stakeholders about how government is progressing the rail enhancements it funds’.

At the end of June this year, New Civil Engineer held its ‘Future of rail’ conference. One of the speakers was Network Rail’s Head of Client Portfolio, Yaelle Ridley. Naturally she was asked about progress with the RNEP.

According to NCE, she told the delegates: ‘The question I always get asked is, “great, so where is the list?” Let’s tackle that one head on, I can’t share it with you I’m afraid. We’ve been specifically told we can’t share the list, we struggle to share it even within our own organisation, which makes it very difficult for future planning.’

Challenged with the impact of this secrecy on contractors, Ms Ridley replied, ‘I know for the supply chain that’s equally a difficult place to be and what that means for supply chain engagement on big and small projects and everyone appreciates that, but at the moment, I really don’t know what else we do. An instruction has come from the Secretary of State on how he has chosen to manage that amount of money’.

Now, who should also be speaking at the conference, but Rail Minister Andrew Jones, whose predilection for non-sequiturs enlivens our ‘Blood and Custard’ column. Challenged on the gnomic-pipeline and its impact on the contractors, Mr Jones got shirty.

‘Hang on there’, he said, characteristically missing the point entirely, ‘we’ve been talking about record levels of budget.

If you look across where most industries are, do most industries have a guaranteed market place of several billions of pounds a year, so come on, let’s start having a think about how this industry fits into a broader economy. I don’t accept the premise of your question basically’.

While DfT intends to publish the enhancements plan, ‘we haven’t published it yet, we will think about how we will do that. But really it should not be thought of some kind of concern that undermines the bigger position’.

Clearly fed up by these ungrateful whingers, he told the supply chain to ‘take a pace back and think about the competitive market place that we are in where other sectors would think, “this is great”’. Warming to the task, he concluded ‘Rail is being bought by this government like no other government in British history. Like no other government across Europe. So start getting with the programme of being positive, you ungrateful lot’! (You made that last bit up, didn’t you? – Ed.

Only the last three words – RF) 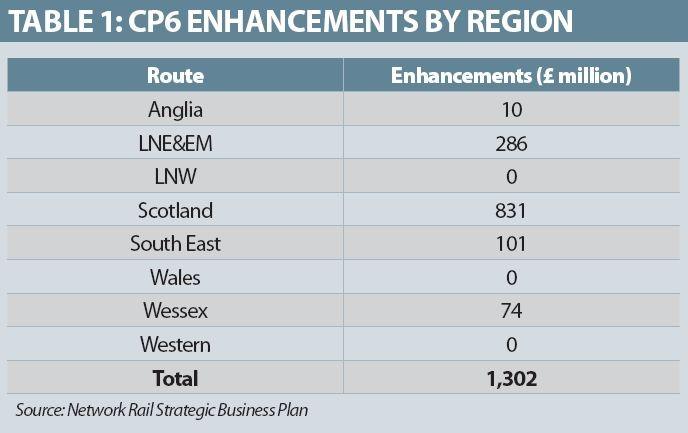 Of course, he was 180 degrees off-course.Not only is the government not ‘buying rail’ when it comes to enhancements, but it won’t let Network Rail say what it might buy, so that industry can keep teams together, invest in plant, take on apprentices and so on.

Normally Mr Jones is a master of the non-answer, prepared by DfT’s 33-strong Obfuscation Directorate on the fifth floor at Great Minster House, so the reprimand at the NCE conference was all his own work. But it was back to business as usual when Labour Transport Spokesman Andy McDonald subsequently took up the subject of the Joanna Southcott pipeline in a series of written questions. For his ranging shot Mr McDonald asked how many strategic outline business cases for rail network enhancements have been (a) received and (b) accepted by his Department since March 2018? Whirring into life, the speak your weight machine replied: ‘The Government is committed to transparent policy making and intends to make clear public statements as we take investment decisions on enhancements.

All right then, what new Network Rail enhancement projects have been announced since the commencement of CP6?

Click, beep, click: ‘Network Rail provides updates on the progress of enhancements already in the portfolio, through the quarterly publication of its Enhancements Delivery Plan. This document lists schemes which have received a final investment decision.’

Finally, Mr McDonald wanted to know, how many schemes had progressed through each of the five stages of the Rail Network Enhancements Pipeline since the publication of the paper entitled, ‘A new approach for rail enhancements’ in March 2018?

Easy, a quick slice and join of the previous magnetic tapes produced: ‘We are committed to transparent policy making in line with the Government response to the Transport Select Committee’s 2018 Rail Infrastructure Investment inquiry. In due course we will be publishing information on how schemes have progressed through the Rail Network Enhancements Pipeline. In addition, Network Rail will continue to provide updates on the progress of enhancements which have received a Final Investment Decision, through the quarterly publication of its Enhancements Delivery Plan’.

I’m making mock of this exchange, but behind this Orwellian Newspeak – transparency means opacity – there are real companies and real people whose livelihoods are at stake. While not articulated so openly, DfT ministers clearly share Boris Johnson’s ‘f**k business’ mindset when it comes to the railway supply chain.

Among those not getting with the programme and being positive is the Railway Industry Association and its forthright Chief Executive, Darren Caplan. In January this year, on the first anniversary of the RNEP, Mr Caplan had written an open letter to Mr Jones.

It began: ‘Ahead of the Spring Statement tomorrow, I am writing an open letter on behalf of Railway Industry Association members to urge more transparency in the Government’s approach to the rail enhancements pipeline. Our members tell us this has now become one of their top priority issues.

Mr Caplan noted that while the RNEP’s five-stage gateway process might bring openness in terms of how future enhancement projects were to be assessed, industry now had ‘very little’ visibility of the actual upcoming work required on the network. Only about £2 billion of the Hendy Tail has been approved.

Noting that a new project will be announced only once it has successfully negotiated a gateway, and with no time limit for each stage of the RNEP, ‘a project could take any amount of time to clear the pipeline and the decision could be taken to cancel a project at any stage’.

All this, claimed RIA, could lead to ‘an enhancements hiatus’ in CP6. The letter also pointed out that while Network Rail has a substantial renewals budget for CP6, the specialists skills such as project management and systems integration required for multi-disciplinary enhancements are not the same as those for largely single-discipline renewals: any hiatus in the enhancements programme ‘could lead to these skills being lost to other clients or sectors’.

‘There is a new expectation that all central government departments will publish their commercial pipelines. This change will help suppliers to understand the government’s long-term demand for services and prepare themselves to respond to contract opportunities.’

On top of these detailed concerns, Mr Caplan reminded the minister that the lack of openness about specific projects was contrary to reforms the Government set out in its Outsourcing playbook, published in February this year, which has been designed to improve how Government works with industry.

The Committee had recommended that projects in the RNEP should be made public, as well as which stage they had reached – and a timeframe should also be given for how long it will take each project to progress through the RNEP.

Meanwhile, for starters, RIA would like DfT to ensure that Network Rail published a full list of those enhancements projects for CP6 planned as part of the Hendy Tail.

Of course, this is not really about industry. The purpose of enhancements is to improve the service the railway delivers to its users – something at the heart of Network Rail under its new Chief Executive.

1. An RNEP without disclosure of new enhancement projects means uncertainty for rail businesses. This will reduce investment, jobs, skills development and threatening the ability of SMEs to survive. It will also increase the cost of future work.

2. There are very few construction-ready schemes in the RNEP. As far as we are aware, there are currently very few enhancement projects ready to come to market, so there could be a hiatus in work for rail businesses. This will impact investment, jobs and the ability of rail businesses to deliver in the future.

3. The timeframe for future projects to come to market is unknown. The Government have not specified the amount of time it will take for a project to progress from one stage to another, or through the whole RNEP. This makes it impossible to plan for an upcoming project.

5. Enhancements require different skillsets to renewals, meaning rail businesses will not find it easy to shift to the renewals market. The Government has increased spending for renewals in the next five-yearly funding cycle, Control Period 6. However, enhancements require more multi-disciplinary skill sets that are different from those used in renewals. This means increased spending in renewals will not compensate for reduced enhancements spending.