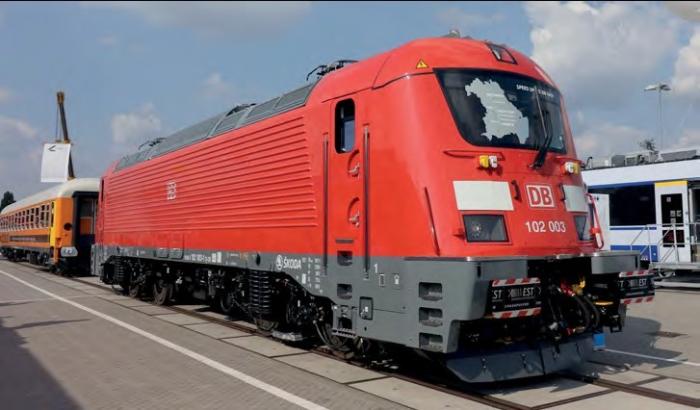 New owners for the Czech factory that built this? Brand new DB Regio electric loco No 102 003 on show at InnoTrans in September 2016. Six of these locos, based on the Czech Railways Class 380 design, along with Skoda-built 189km/h double deck coaches, are on order for Munich to Nuremburg high speed regional services; the trains were due in service in December 2016 but have yet to be approved for use in Germany.
Keith Fender

Czech rail engineering firm Škoda Transportation is reported to be close to agreeing a takeover by Chinese rail engineering conglomerate CRRC Corporation Limited (China Railway Rolling Stock Corporation). CRRC informed the Hong Kong stock exchange on 28 November that it had started negotiations for the potential acquisition of a 100% stake in Škoda Transportation via its CRRC Zhuzhou Electric Locomotive subsidiary. Chinese analysts have valued the potential acquisition at $550 million.