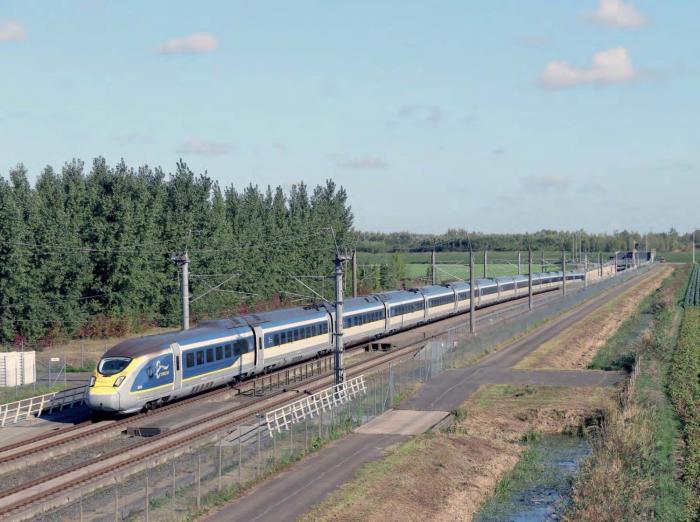 DB faces a growing debt burden which will very shortly breach a €20.4 billion ceiling agreed with the government, unless a new source of funds is found (or a new higher debt ceiling agreed). Servicing the debt costs DB around €800 million in interest charges annually. DB also has a pre-agreed dividend policy to pay the German government a minimum agreed dividend annually and the company’s overall inancial position makes these payments diicult if other investment is to be sustained (however, in reality the recent payments have been reduced from the original targets to €600 million and €450 million in 2016 and 2017 respectively). DB results for the half-year to June 2018 saw overall revenue up 2.3% to €21.6 billion, but operating proits (Earnings Before Interest and Tax) were down 17.5% to €974 billion. Ongoing losses in Germany, the UK and elsewhere at rail freight subsidiary DB Cargo were in part responsible for the declining proits. Based on this performance, the full year forecast proit barely covers annual interest payments, let alone at least €450 million in dividend payments, leaving very little for reinvestment in the operating businesses. This position has led to full or partial sales of subsidiaries appearing to ofer a potential solution. Whilst such a sale would generate substantial cash for DB, it is unclear that the current German government would agree to such a step.

Despite its inancial diiculties, DB has recently conirmed orders worth €700 million with Siemens for new trains. The orders cover 18 further seven-car ICE4 units for delivery from 2023 (bringing the total on order to 37), along with 50 additional powered intermediate vehicles to enable 50 of the 12-car Class 412 trains on order to be delivered as 13-coach, 918-seat trains from 2021 onwards.

DB plans to use the seven-coach trains for services between Austria and Germany. They will be used in multiple as 14-car trains in some cases. Both 12- and 13-car ICE4s are intended for use in Germany, Switzerland and Austria.

The 13-coach trains will be used on routes with considerable gradients (for example, the Cologne to Frankfurt RheinMain line). DB has also announced a €320 million investment in the second major refurbishment of its original ICE1 leet, dating from the early 1990s. These trains are likely to remain in service for up to 15 more years, although the more modern (and shorter) ICE2 trains are likely to be replaced from the mid-2020s by new ICE4 units.

In November Siemens and DB announced that the Class 412 ICE4 EMUs now have full approval for operation using European Train Control System (ETCS). This will enable deployment on the Erfurt to Ebensfeld high-speed line as planned from December, when the new trains will take over some Hamburg to Munich (via Berlin) services.

Following the serious ire on board an ICE on 12 October (‘Europeview’, last month), the Cologne to Frankfurt RheinMain high-speed line was closed as a through route for over week.

Through services resumed on a limited single line working basis, using only the northbound track for a lengthy section, from 20 October. Many other services continued to be diverted via the classic Rhine Valley route, adding a minimum of 80-90 minutes to journey times. DB restarted services on the southern section of the line (heavily used by commuter traic on weekdays) between Frankfurt and Montabaur relatively quickly, as the damaged section was north of Montabaur.

Removing the damaged train took just over a day, with the worst damaged vehicle cut into pieces to remove it. Repairing the southbound track where the vehicle had burned took much longer as the heat had damaged and partly destroyed the slab track and rails. An entirely new length of slab track had to be constructed and then left to set fully before trains could resume on 18 November.

German wagon builder Waggonbau Niesky, which has had several diferent owners since privatisation in the mid-1990s (including for a period national rail operator DB), has been sold to Slovakian wagon specialist Tatravagónka after being threatened with closure early this year due to insolvency. Waggonbau Niesky, based in the eponymous Saxon town of Niesky, has built a wide range of wagons in recent years, including the latest three HGV shuttles for Eurotunnel (delivered in 2017 in a contract worth €40 million).

DB has announced that its Digital Ventures business unit will invest several million Euros as a strategic investor in Canadian start-up satellite telecommunications irm Kepler. Kepler (named after seventeenth century German astronomer and scientist Johannes Kepler) raised US$16 million from DB and other investors to fund the next stage in its development. Kepler is planning to create a network of 140 nanosatellites and will shortly launch a new satellite designed to optimise the Internet of Things (IoT) for transport operators – this particular project is the motivation for the DB investment.

Kepler started its business in 2015 and has so far developed three diferent ‘nanosatellites’, which the company describes as being the size of a shoebox. Overall the nanosatellite industry is growing fast (with a 30% year-on-year growth in the last ive years) as the satellites are much cheaper to build and operate by being smaller and orbiting the earth at lower altitudes (around 575km for low earth orbit, compared to the 35,000km of the large traditional geo-stationary satellites). Kepler has developed innovative radio systems that can receive, store and transmit data from multiple sources very quickly – enabling so-called ‘cloud computing’ as the source or user of the data does not need to be physically close to the computer server processing the data.

The funding from DB and other investors will enable around 15 more satellites to be launched in 2019/20 to start construction of the planned global network. At InnoTrans, DB and Siemens announced a contract from DB Cargo to it smart sensors on its freight wagon leet; initially 30,000 wagons will be equipped by 2020, with up to 20,000 more later. Coupled with sensors on containers and lorries, huge amounts of data will become available, which if processed and used intelligently could improve customer service and lower costs through predictive maintenance. Announcing its investment, DB said in a press release: ‘With its satellite network, Kepler makes the Internet of Things available worldwide – independent of mobile masts, country borders and roaming agreements’, which has ‘great potential, especially for international freight transport and logistics’.

Initially the services will operate between the Maddaloni-Marcianise terminal located to the north of Naples, near Caserta, and the Bologna Interporto terminal north east of Bologna in around three and a half hours for the 575km journey. The initial route was selected to maximise use of the high-speed network and to relieve the very busy north-south A1 motorway. Extension of the services with additional trains is planned in the future to serve all the major Italian cities served by the country’s high-speed network.

Initially a single 12-car ETR500 train has been converted, with windows replaced by metal sheeting and the interiors converted to carry wheeled containers, each able to carry 220kg. The concept of high-speed freight is not unique; the French Post Oice in conjunction with SNCF-operated postal TGVs between 1984 and 2015 on the Paris to Lyon route.

Mercitalia has also been investing in new diesel locos for its ‘Shunting and Terminal’ business unit. Czech manufacturer CZ Loko has supplied ive of its ‘Eishunter 1000’ 895kW Bo-Bo locos incorporating a Caterpillar CATC32 engine and Siemens electrical equipment. The locos will be used to marshal trains at major intermodal hubs, for example in Milan, Ravenna and Livorno.

The Prime Minister (An Taoiseach) of Ireland, Leo Varadkar, has weighed in behind extension of the Western Rail Corridor (WRC) from Athenry on to Tuam (and Claremorris). He told the parliamentary representative for Galway East, Independent Sean Canney, in writing that, should the recently commenced review of the business case for the extension come up with a recommendation to proceed, then he would prioritise and advance the project. Mr Varadkar stated in the letter that the extension of the WRC ‘could play an important role in the Atlantic Economic Corridor’ and that it ‘could increase passenger, tourist and commercial use’. The review is being undertaken by the Minister for Transport, over two years after it was initially promised.

The battle to have the route reopened is now quite intense, with alternative proposals pushing for the railway to be turned into a cycleway and the reopening proposals abandoned. Iarnród Éireann has entered the argument, saying the Athenry to Claremorris line ‘will be assessed under Programme for Government commitments’, although it added that it supported the use of ‘disused rail alignments generally as greenways where there is no realistic medium-term prospect of a rail service being reinstated’.

The National Development Plan and the Programme for Government have both supported the prospect of restoring train services on the WRC, as do existing county and regional plans. Galway County Council, despite pressure from the cycle path lobby, recently voted not to support conversion of the WRC for use as a cycleway, but instead endorsed the concept of a ‘County Wide Greenway Network’. Tim Casterton

The Norwegian government has taken a structured approach to opening its rail market to competition, setting up independent new companies to own all the former state railway’s rolling stock and another to act as a national impartial retail outlet for all rail tickets. In October, Entur, the company established by the Norwegian government to handle all rail ticket sales, took over operation of ticket machines and travel centres formerly operated by NSB; Entur already ofers online sales channels.

Go-Ahead Norge told Modern Railways it will be hiring a leet of 20 EMUs (seven Class 73A long-distance EMUs for Oslo to Stavanger services, plus 13 regional EMUs – 11 Class 72 and two Class 69 trains). Also in the leet will be three Class El 18 locomotives (built in 1996-97 by ABB/Adtranz based on the Swiss Re460 design) with 14 type B7 hauled coaches, including four sleeping cars, two restaurant cars and eight day coaches. All will be leased from rolling stock leasing company Norske tog, which was founded in June 2016 as a wholly-owned subsidiary of NSB, taking over the former NSB rolling stock leet in October 2016. Since April 2017 Norske tog has been wholly owned by the Norwegian Ministry of Transport and Communications as part of the preparation for national tendering. The second Norwegian concession tender, including the Trondheim – Bodø Nordlandsbanen and the Meråkerbanen (Hell – Storlien) plus regional services around Trondheim, is underway and will be awarded in 2019. 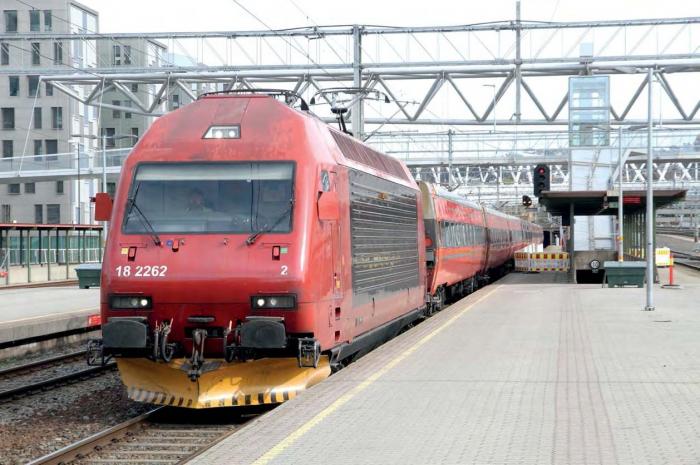