EWR CONSULTS ON BEDFORD TO CAMBRIDGE 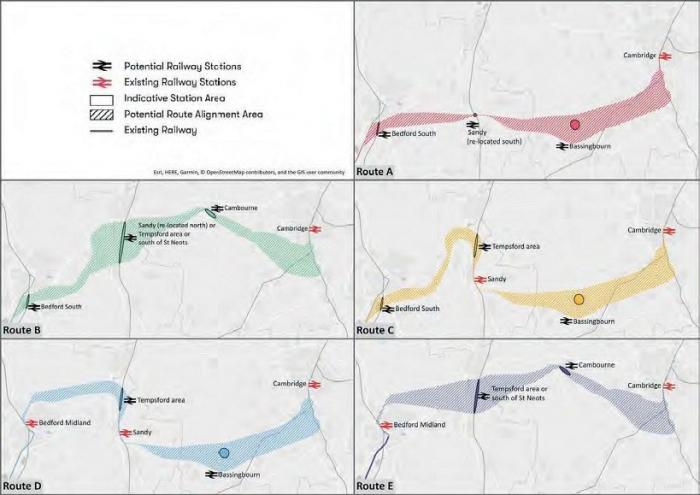 Striking eastwards: route options for East West Rail from Bedford to Cambridge, with (below) new logo for the route.

EAST WEST Rail has begun consultation on five route options for a new railway between Bedford and Cambridge.

The scheme forms part of the wider project to create a new line connecting Oxford and Cambridge. Following a six-week consultation, the aim is to select a preferred route later this year, albeit with options covering areas up to several kilometres wide. A detailed alignment and station locations will then be chosen, followed by a further statutory consultation in 2021. The scheme hopes to achieve development consent in 2023.

In 2016 early work by Network Rail identified a broad route corridor via Sandy as the best option for a new line linking Bedford and Cambridge. Unlike the section between Bicester/ Aylesbury and Bletchley, where the mothballed route is largely intact, a completely new railway will be required east of Bedford.

In developing options, EWR’s aim was to prioritise serving locations that could support growth and new homes over fast end-to-end journey times. However, the aim is still to provide significantly faster journey times than would otherwise be available, with a target Oxford to Cambridge schedule of around 80 minutes. Additional works would also be required on the Marston Vale route between Bletchley and Bedford to provide capacity for EWR services.

From 11 route options considered in detail, five have been put forward for consultation. All five routes approach Cambridge from the south by connecting to the West Anglia main line in the Great Shelford area. Options were considered for approaching Cambridge from the north, but issues identified with this include the need to modify the new Cambridge North station, higher capital and operating costs due to the greater route length, the need to reverse at Cambridge for through journeys onwards to East Anglia, the presence of existing infrastructure in the form of a guided busway and the inability to serve the proposed new Cambridge South station. However, EWR notes two of the five route options for consultation could approach Cambridge from the north if such a theme emerges strongly in the consultation.

Of the five route options, three would diverge from the Marston Vale line around Stewartby and could serve a split-level Bedford South station to provide interchange with Thameslink services on the Midland main line. From there, route A would head east to serve a station at Sandy relocated south of the existing one, with potential for an additional station on the Ministry of Defence site at Bassingbourne. Route B would serve a split-level station on the East Coast main line between Sandy and St Neots, either a relocated Sandy station or a new station further north. It could then serve a new station at Cambourne before joining the west Anglia main line. Route C would loop north to join the ECML in the Tempsford area, heading south alongside the ECML to the current Sandy station before turning east, again with a potential station at Bassingbourn.

The remaining two routes involve EWR services running into the current Bedford Midland station and out to the north. This involves more complex interactions with the MML, potentially including the relocation of Bedford maintenance depot, and these routes are therefore costlier. Route D would follow the same path as Route C east of Bedford with calls at Tempsford and the existing Sandy station, while Route E would serve a split-level station on the ECML between Sandy and St Neots, located either in the Tempsford area or south of St Neots, with the option of a station at Cambourne further east.

EWR’s technical report on the options suggests Routes A and B have the greatest chance of securing private sector funding (one of the aims of the project), largely because they avoid complex interfaces with the existing Midland and East Coast main lines. Oxford to Cambridge journey times on all five routes would be between 76 and 83 minutes, with transport user benefits of between £0.5 billion and £0.7 billion before consideration of wider growth potential across the Oxford-Cambridge arc. Route A has the lowest expected upfront cost at £1.7 billion, with Route E having the highest at £2.8 billion.

Consultation on the route options runs until 11 March, after which a preferred option will be selected and precise route and station alignments will be developed. EWR has also published a Prior Information Notice seeking delivery partners for the central section, and an engagement session was due to be held in February.

Meanwhile, the public inquiry on the second phase of EWR connecting Bicester and Aylesbury to Bedford and Milton Keynes began on 6 February. Due to finish in late April, planners are considering the reinstatement of the mothballed railway between Bletchley and Claydon Junction as well as upgrades to other routes.

Hearing the case for EWR: the inquiry into the second phase began on 6 February. Phil Marsh