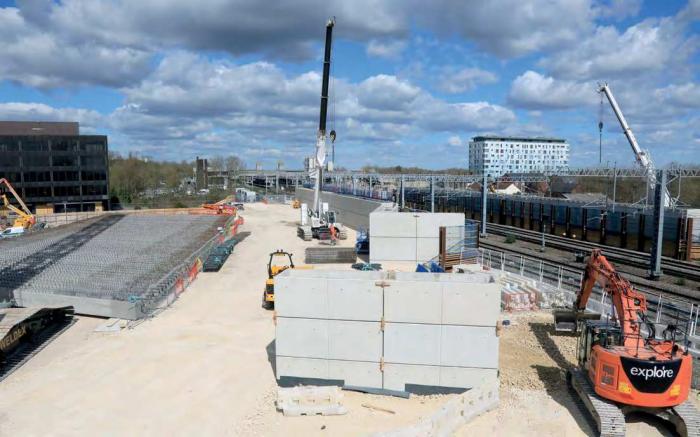 Bletchley flyover progress: over the bank holiday weekend at the start of May beams for the new flyover across the West Coast main line will be installed – these are laid out in the left of this shot ready for installation.
Phil Marsh

THE EAST West Rail Company has launched a consultation on options for delivering elements of the new Oxford to Cambridge railway line. Included are five possible route alignments for a new railway from Bedford to Cambridge and options to upgrade the Bedford to Bletchley line, as well as to improve existing stations at Oxford and Bedford.

Construction is underway on the Bicester to Bletchley section of EWR, with half-hourly Oxford to Milton Keynes services due to start by 2025. Work is then due to begin on upgrading the Bletchley to Bedford section and building the new railway east of Bedford. In a second ‘Connection Stage’ an additional two trains per hour would operate between Oxford and Bedford, followed by the end of the decade by the extension of Oxford to Bedford trains to Cambridge and the overlaying of an additional two trains per hour from Bletchley to Cambridge. Target journey times are 45 minutes for Oxford to Milton Keynes, 60 minutes for Oxford to Bedford and 95 minutes for Oxford to Cambridge. The consultation, which also covers elements of the customer experience and railway operations such as timetables, stations, on-train experience and customer information, closes on 9 June.