VICTA RAILFREIGHT has been awarded a Freight Fund Grant worth £195,000 by Transport Scotland for the trial movement of timber on the Far North line. The six-week trial during August and September has seen timber, primarily from forests in Caithness, moved to the Norbord plant at Dalcross near Inverness. 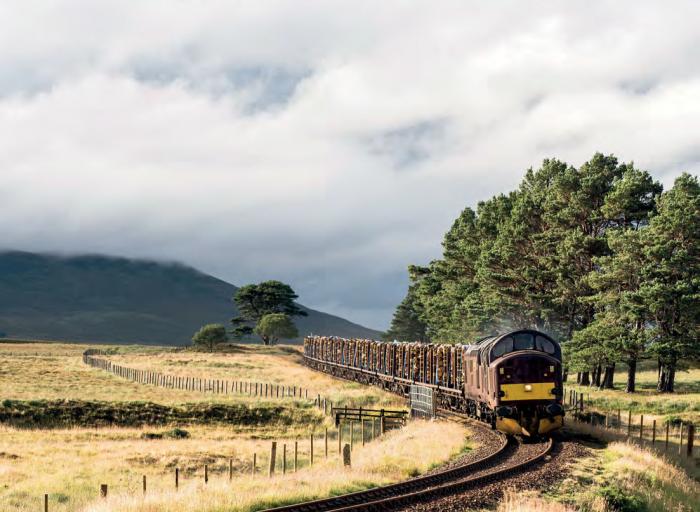 The objective of the trial is to re-establish rail as a potential means of transporting timber from forests to the main users of timber, to reduce the pressure on fragile rural roads and to help reduce carbon emissions. In the trial trains have been operating up to three times a week, with a capability of moving around 6,000 tonnes of timber. This will take around 250 lorries, totalling 55,000 lorry miles, away from Scotland’s roads.

Victa is leading a cross-industry effort to enact the trial, with active support from Network Rail and the Highlands and Islands Transport Partnership. DB Cargo has supplied wagons: BTA wagons normally used for carrying steel pipes were taken from Hartlepool to Georgemas via Mossend and Inverness at the end of July. Train operation, including locomotives and drivers, has been provided by West Coast Railways (WCR). Victa says the team effort is the culmination of activity following the Timber by Rail Summit convened by the Scottish Government’s Cabinet Secretary for Rural Economy and Tourism, Fergus Ewing, in the spring of 2019.

The main flow will be from the freight terminal at Georgemas Junction to Milburn freight yard at Inverness for onward delivery by road, with timber coming from Munro Harvesting. Transport Scotland says other potential loading points may be used, commenting: ‘Subject to the relevant approvals the trial will look at additional potential loading points including Thurso, Lairg and Kyle of Lochalsh’. Kinbrace, a remote lineside loading point north of Helmsdale, is thought to be another possibility.

Norbord at Dalcross, near Inverness airport, is the receiver for most of this timber. The company is considering construction of a siding off the Aberdeen line, which abuts the firm’s premises, but for the trial the logs are unloaded at Inverness yard with a road shuttle to Dalcross. Victa said it might also run one or two trains to other destinations.