THE TICKETING and Settlement Agreement (TSA) could be replaced and fares moved to a basis of single-leg pricing, if proposals from the Rail Delivery Group are taken forward.

The outcome follows a consultation run by RDG in partnership with Transport Focus last year, which attracted nearly 20,000 responses along with feedback from over 60 organisations. Among those, 84% of people said the current fares system is not fit for purpose and should be reformed. Based on the consultation, the RDG has set out five principles for reform: value for money, fair pricing, simplicity, flexibility and assurance. The outcome of the exercise is the proposition that passengers should pay only for the travel they need with a system designed to give them the best value fare.

A two-stage approach to regulatory reform would first see government, industry and stakeholders work to replace the TSA, which was setup at the time of privatisation based on structures inherited from British Rail. Instead, a new set of regulations would underpin the fares system, which would allow a single fare to become the core building block of pricing, enabling fares better suited to passengers’ needs and removing current inconsistencies. This structure would also enable better use of modern technology such as smart and Pay As You Go (PAYG) ticketing.

RDG says the changes would enable the ‘unbundling’ of fares through the move to a single fare as the basic unit of pricing. Operators will be able to create discounted, premium, train-specific and personalised variations of such fares, ensuring fares are priced appropriately to the market. Regulation would move from the day return and seven-day season ticket to the maximum price paid for travelling over the course of a week, with systems programmed to deliver this automatically and passengers to benefit from travelling at off-peak rather than peak times. On longer-distance routes regulations would be based on the overall level of revenue that can be raised, while allowing appropriate demand management on individual services. Adoption of a system based on a single-leg structure would enable pricing of local fares to be disaggregated from the national structure, such as allowing devolved authorities to influence fares.

RDG says the proposals form a first part of the industry’s submission to the Williams Review, but is seeking to start the process of change prior to the review reporting. This could begin with a review of the TSA and a series of trials over the next year, which would cover single-leg pricing on a long-distance main line operator, PAYG on a suburban commuter operator and leg-based pricing on a long-distance operator. Contracts would be revised and agreed, with the potential for the programme of reform to be rolled out over the next three to five years. 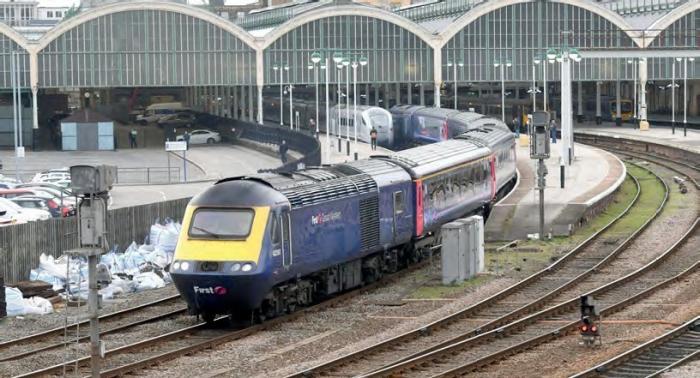 Open access operator: this is Hull on 8 March 2019, with a former Great Western HST that Hull Trains has deployed as cover for unreliable Class 180s and, at left, an Intercity Express Train brought in by HT as a promotion for its forthcoming IET service.
Ian Lyall