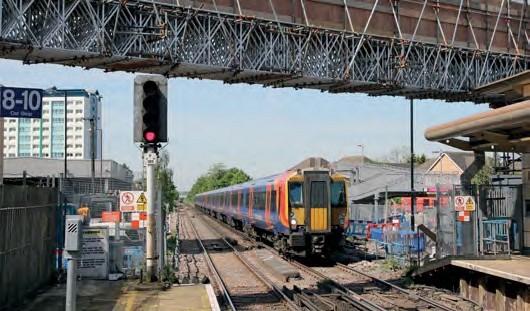 Feltham: SWR’s No 458533 seen on the former Feltham West level crossing on 14 May 2019 passing under the interim pedestrian bridge. Keith Fender

NETWORK RAIL has begun a £23 million redevelopment of Feltham station. The Feltham West level crossing (Bedfont Lane) was closed on 16 March. The crossing, which has now been removed, was rated the second highest-risk highway crossing on the entire south western rail network by Network Rail, with a history of dangerous deliberate misuse.

New longer platforms (able to take 12-coach trains) are being built over the former crossing site at the western end of Feltham station.

A new pedestrian bridge with both stairs and ramps will be installed, replacing the previous ramped one which has been removed and replaced in the short-term by an interim stepped bridge made from scaffolding. The new permanent footbridge will provide step-free access between Bedfont Lane and Feltham town centre.

Osborne is the lead contractor for the work at Feltham, which includes a second step-free station entrance on the Up platform (for connections to buses serving Heathrow Airport) due to open in the autumn. The extended platforms should be completed during 2019 with all the work finished by spring 2020. Keith Fender