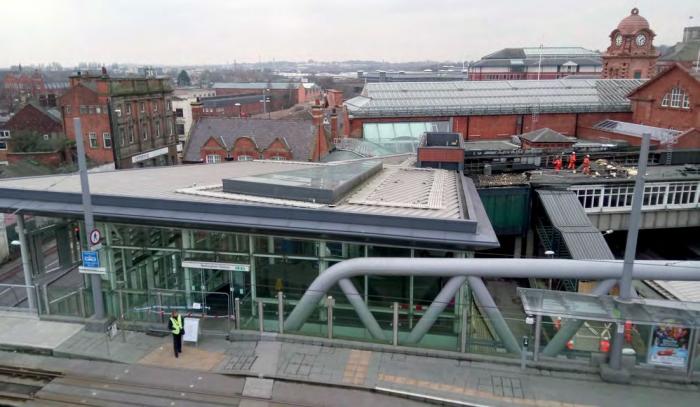 Clearing up: staff attend to damage on the footbridge at Nottingham station on 13 January 2018. At bottom left of the photo is the closed southern concourse.
Philip Sherratt

A MAJOR fire broke out at Nottingham station on Friday 12 January 2018, closing the station for the rest of the day.

The fire started at around 06.30 in a toilet in the new southern concourse, which links the station frontage to the tram stop.No passengers or staff were injured. Crews from both Nottinghamshire and Derbyshire fire services tackled the blaze, which spread through the concourse and to the roof. Crews described the conditions as ‘arduous’, and the fire was not fully extinguished until late that afternoon.

East Midlands Trains suspended train services at the station for the rest of the day, with services from London turning back at East Midlands Parkway. Following work by Network Rail and inspections by structural engineers that evening, platforms 1 to 5 reopened to enable a slightly reduced service to operate the following day (Saturday 13 January), with the remaining two platforms brought back into use in the late afternoon of 13 January. 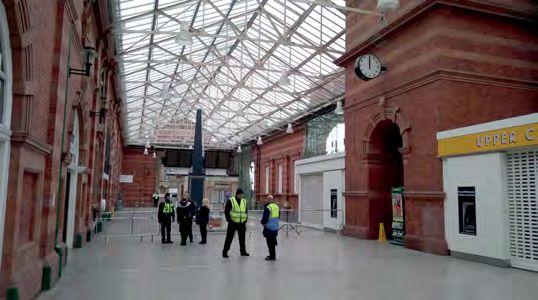 History intact: this view inside the porte cochère on 13 January shows the building undamaged, but the link to the southern concourse is closed off.
Philip Sherratt

The station was upgraded between 2012 and 2014 in a £60 million project led by East Midlands Trains, Network Rail and Nottingham City Council. This included restoration of original features within the main concourse, and major work to the station frontage, making the porte cochère vehicle-free (it previously housed the taxi rank), with new shops and cafes. The opening of the southern concourse was also part of this work. The frontage, porte cochère and main concourse were not damaged substantially by the fire, but it is understood some areas of the station control room and the area behind the ticket office have been badly affected.

The British Transport Police has appealed for information regarding the incident, and has suggested it believes the fire may have been started deliberately.