USE ON COVENTRY TO NUNEATON LINE ABANDONED 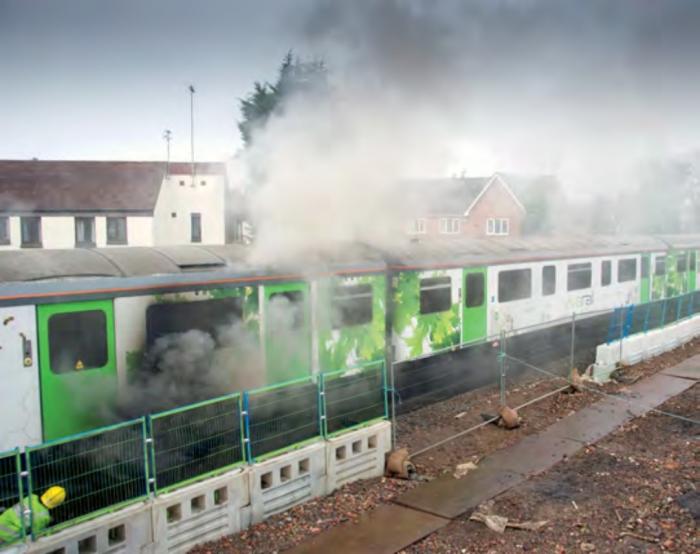 THE TRIAL of the prototype Vivarail Class 230 DMU on the Coventry to Nuneaton line has been cancelled following a fire in one of the unit’s engine modules on 30 December 2016.

The unit had been undergoing main line testing since last November, based at Tyseley locomotive works, ahead of a planned introduction into passenger service early this year. Vivarail announced following the incident that the trial would be postponed, but in a joint statement Coventry City Council, Coventry and Warwickshire Local Enterprise Partnership, London Midland, Warwickshire County Council and the West Midlands Combined Authority, the scheme’s partners, said: ‘This delay means there is no longer enough time to run and evaluate a pilot service using these trains before the next local rail franchise starts in October. It is for this reason we have little choice but to reluctantly withdraw from the trial’.

The D train concept utilises former London Underground ‘D’ stock bodyshells and bogies and is powered by Ford Transit diesel engines. The fire occurred in the Kenilworth area as the unit was travelling from Leamington Spa to Coventry on 30 December. It occurred in genset GS4, fitted in position two on vehicle No 300101. The fire alarm sounded, causing on-train staff to investigate the cause, shortly after which the train’s air pressure dropped below the required level and the emergency brake was applied. The fire brigade attended within 20 minutes of this, and the fire was extinguished before the unit moved under its own power to Coventry. It was subsequently transported by road back to Vivarail’s Long Marston base for examination. No one was injured in the incident.

An interim report into the incident produced by Vivarail indicates that the fire caused sufficient damage to make vehicle No 300101 unfit to be powered up due to the damage to the underframe electrical and pneumatic systems. The genset frame, structure and fixings remained intact and were easily removed from the vehicle. Within the engine itself there was ‘considerable damage’, with most combustible material reduced to ash sat in the bottom and with evidence that some of the aluminium intercoolers mounted at the top of the module had also partially disintegrated. The initial inspection revealed no visible damage to the passenger saloon, indicating that the fire barrier above the engine did ‘an excellent job’. However, heat did enter the underfloor wiring tray, causing significant damage to cable insulation, and all wiring in the underfloor will require replacement.

Vivarail says the cause of the fire is not immediately obvious and that a forensic examination of the genset will take place. There was also a fuel leak in a genset fitted to one of the other vehicles in the train and an air leak in another genset, which was determined to be from a breached oil level monitor through which most of the compressor oil had leaked. Issues raised in the interim report include that the fire alarm indicated that the fire extinguisher had been activated, but the fire suppression system was not capable of extinguishing the fire. The loss of pressure in the air reservoir which caused the emergency brake to be applied occurred within four minutes of the fire alarm sounding, which Vivarail says missed its design target of being able to run for up to 15 minutes.

An initial download of the closed circuit television (CCTV) from the train indicates that the unit stopped recording on 13 December, despite all the indicators suggesting that it was doing so, and the original equipment manufacturer is investigating this. Segments of data from the on-train data recorder from one of the other vehicles also seem to be missing, including the journey on which the fire occurred, although the OTDR in the damaged vehicle was working and recording; again this is being investigated.

The trial on the Coventry to Nuneaton line was originally due to begin in autumn 2016 and run for 12 months until the end of the current London Midland franchise. However, delays in obtaining approvals for the unit to run on the main line set this back. The Coventry to Nuneaton line was chosen for the trial because services are currently provided by a single-car Class 153 DMU, limiting capacity, particularly around events at the Ricoh Arena.

Vivarail was due to be produce a final report into the incident, following more detailed inspection of the genset, by the end of January.