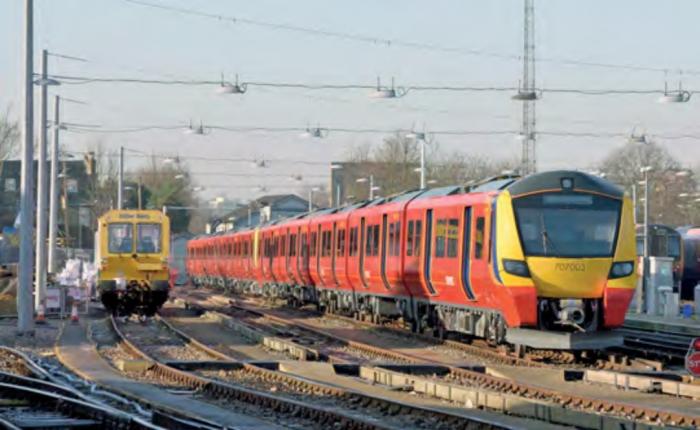 THE FIRST Siemens-built Class 707 EMU for South West Trains arrived in the UK on 9 December.

The 30-strong fleet of five-car trains is due to be introduced during 2017 to operate on SWT’s Windsor line services. The new fleet forms part of the operator’s plans to increase peak capacity into Waterloo through lengthening trains, extending platforms and bringing back into use the former international platforms at the terminus.

Built by Siemens in Germany, the £210 million fleet has been financed by Angel Trains. Entry into passenger service is planned for 17 April 2017; this has been accelerated so that a proportion of the fleet is running ahead of the South Western franchise change, scheduled for 20 August 2017. In time, deliveries will ramp up to a pair of units a fortnight, with the full fleet due in service by November 2017. The timetable change in December 2017 will see some reallocation of rolling stock, taking advantage of the extra capacity in the fleet, but the timetable itself will still be based on the 2004 iteration.

The arrival of the ‘707s’ will trigger a rolling stock shift within the SWT fleet – with the new trains allocated to Windsor services, five-car Class 458/5s will transfer to Waterloo to Reading workings. This will release 24 Class 450s currently allocated to these duties – five will go to Guildford to Ascot services, replacing two-car Class 456s which will be ready to bolster the suburban fleet when 10-car operation begins in December 2017 after platforms 1 to 4 at Waterloo have been lengthened, and the remainder will be used to lengthen trains on the main line, where a number of shoulder peak workings are not formed of the maximum 12 carriages.