THE FIRST Vivarail Class 230 unit arrived in Wrexham from Long Marston on 20 July. The run did not involve Transport for Wales and was not publicised, but local rail users and staff took the opportunity for a first look at their future trains. 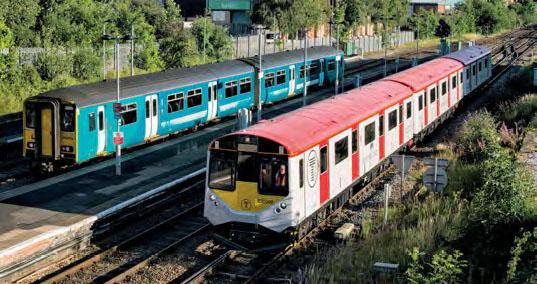 Welcome to your new home: evening sunshine greets the first arrival of a Class 230 at Wrexham on 20 July 2020 at the end of the unit’s run from Long Marston. TfW’s Class 230s will be based at the former bay platforms, where a Class 150 pauses between duties on the Wrexham to Bidston line.
Rhodri Clark

TfW has ordered five of the units, comprised of rebuilt former London Underground vehicles, to operate on the Wrexham to Bidston line, where service frequency is due to increase from hourly to half-hourly in December 2021. This will require daily use of four units.

Having arrived at Wrexham General on 20 July, No 230006 shunted into the former bay platforms where the units will be based. The Welsh Government funded depot facilities there prior to the 2008 launch of Wrexham & Shropshire Railway’s open access services to London Marylebone. The unit subsequently undertook test runs over the line to Bidston. It also made trips to Crewe and Chester. Sister unit No 230007 arrived at Wrexham on 13 August and moved to Birkenhead North depot the following day.

The three-car units for TfW are diesel/battery hybrids. TfW had expected the Class 230s to enter service in May 2019 but there have been many delays. In April, TfW’s board was informed that all the projects to introduce cascaded rolling stock had been delayed as a result of Covid-19 and that a ‘detailed review of the Class 230 project is underway’.

Members of the Wrexham-Bidston Rail Users’ Association observed some of the test runs and reported the Class 230 accelerated quicker than the line’s current Class 150s and was noticeably quieter. Turnaround times are notoriously tight for the current hourly service, with little leeway for recovery from delay. The WBRUA hopes the Class 230s’ superior acceleration will improve reliability and enable all stations on the line to benefit from half-hourly services. In 2018, TfW said one train per hour would be limited stop from December 2021.