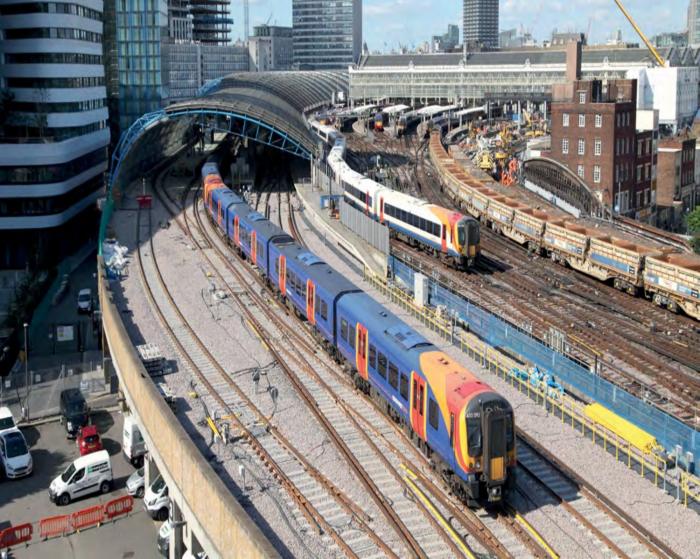 Waterloo blockade: unit Nos 450093/110 arrive at the former Waterloo International platforms with the 15.03 from Weybridge on 10 August 2017.
Antony Guppy

A FIRST Group/MTR consortium was due to take over the South Western franchise from Stagecoach in the early hours of 20 August, after this issue of Modern Railways had gone to press. The takeover would take place in the middle of a three-week blockade for platform-lengthening works at Waterloo, but new Managing Director Andy Mellors, who will lead what will be branded as the South Western Railway, was upbeat in the days before the takeover.

‘I absolutely recognise that there are some really strong foundations that have been put in place over the last 21 years by Stagecoach and we’re going to be inheriting what is a really experienced team of around 5,000 people’ he said. Complementing this strong inheritance will be significant investments by First/MTR, including refurbishment and the provision of longer trains and £90 million on station investment.

‘In addition we’ve got some innovative proposals with regards to fares; whether that be through flexible season tickets, discounted tickets for 16 to 18 year olds, widening the area over which advance purchase tickets are available… We’re going to be pushing our marketing activity very hard to try and drive revenue, particularly at times of day and days of the week where we’ve got capacity on our network.’

With overcrowding having been a major problem in recent years, Mr Mellors said he has plans to guide some passengers towards the shoulder peaks or times when there is already more capacity. ‘We will be providing additional capacity where it’s most needed, through a combination of the reintroduction of the Class 442s (on the Portsmouth line), the redeployment of trains within the franchise, better stock utilisation and the new Bombardier trains (for suburban routes) coming on line. 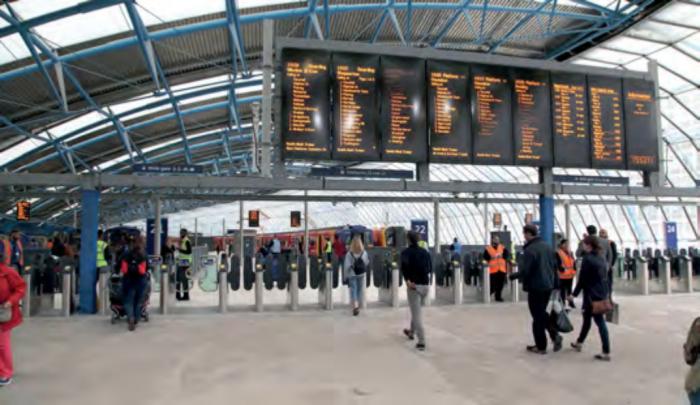 International station returned to service: gateline and indicator board at the revamped former Eurostar platforms at Waterloo on 10 August 2017, which were made available for local services during the August blockade.
Antony Guppy

‘Introducing a 10-car train that doesn’t have buried cabs within its formation, which the Aventra platform gives – as well as offering more space inside the vehicle because a lot of the traditional body-end equipment is out up in the roof – means that we get the potential for some quite significant capacity uplifts. By December 2020 when the last of the new trains will have been introduced there will be something like 52,000 additional seats into or out of Waterloo in the peaks, which is a 30% increase. That’s not insignificant. We’re taking over the franchise in the middle of the Waterloo works, which are a particular enabler of the operation of 10-car formations from the platforms served by many of our suburban trains.’

Mr Mellors continued by explaining that underlying the rolling stock strategy is a plan to make sure that all the train types are appropriate for the jobs they have to do. ‘If you take the first intervention – recognising that we’ve got the Class 707s alreadyordered and we’re committed to taking those trains and introducing them up to December 2017 timetable change and then keeping them until the new Bombardier trains come along – the next intervention is the reintroduction of the Class 442s. This will be 90 vehicles as 18x5-car sets; the maximum that were available to us when we put the bid in, and they are going to be refurbished and re-engineered. Much of what’s below the solebar on these trains was secondhand when they were built in the 1980s and we will be spending quite a significant amount of money not only on the interior refurbishment but on a complete replacement of the traction pack and braking system in a deal which we will be announcing shortly. In fact we have already placed letters of intent with the supply chain to get cracking on some of the long-lead issues.

‘The insides will be “as new”, we will retain the 2+2 seating but the first class will be moved to an end vehicle. The Class 442s will be used on the Portsmouth fast services, where stakeholders have told us very clearly that the “450s” with 2+3 seating are not appropriate for these express services. The end doors on the Mk 3 vehicles won’t be as much of an issue because the nature of the fast services they’ll be running means that most passengers will be boarding in the morning on the way into London and then all getting off (in) London. It’ll be a much better customer environment and we intend to have all 18 sets in service in their re-engineered state by the end of 2018.

‘This will mean that the existing trains on the Portsmouth line can be redeployed, with the “444s” going onto the South Western main line to Southampton. We’ll also be kicking off a refurbishment programme of all the Desiros, the “444s” and “450s”, and this will be done by the end of 2018.

‘We’re pretty limited by what we can do with the Class 158/159 West of England diesel fleet at the moment because we’re in the middle of C6 (overhaul) and Passengers with Reduced Mobility work, but we are committed to refurbishing those units as well and it’ll be done by December 2020.

‘When you look at the average age of the fleet, by December 2020 we’ll have almost halved it. We are retaining an element of flexibility with regard to releasing the older units – the Class 455, 456 and 458 sets – and are currently concluding our lease agreement negotiations with the ROSCOs (leasing companies). This will depend slightly on the precise programme of new train introduction to ensure that we’re not taking capacity away before new trains come on line.’

Following recent DfT comments about the removal of first class from commuter services, Mr Mellors confirmed that it will be retained on longer-distance services, including on the Desiro sets, adding: ‘There is a position that’s been expressed by Government in terms of first class provision, particularly where there’s no reasonable demand for it. On the suburban and Windsor lines there’s a mixed bag at the moment; the new Bombardier trains will be standard class only but with a better customer environment including air-conditioning, high speed wi-fi and toilets. Trains are constrained by length and our challenge is to make best use of the capacity they provide.’

It has been widely reported that staff are concerned about any moves to Driver Controlled Operation of doors, and the main trade unions have been seeking reassurances about future plans from the new operator. SWR has said it does not intend to reduce staff numbers and sees a strong benefit in having more than one person on a train, even if some specific duties change.

Mr Mellors explained: ‘The plan is to have a second person on-board every train. We know that our customers appreciate that and from time to time regular customers as well as infrequent travellers need that reassurance as well. We plan to have a second person on-board our trains and we are not committed to any particular method of operation through our bid. We do want to deliver high-quality services for passengers and we want to determine what the best method of operation is. So we will fully involve our employees in the event that any changes are proposed.’

The South Western franchise is in a unique position in that there is a legally-binding agreement with the RMT union that transfers to the new operator: in the event that any attempt was made to change arrangements without the agreement of the union, the RMT would be able to take out an injunction to enforce the agreement.

‘We’re very keen to engage with our employees as to how we move the business forward’ said Mr Mellors. ‘We will need more people in this business: we’re running more trains including the Sunday service enhancements and proposals like the move to four trains an hour to Reading and Windsor.

‘We also want to improve hours of gateline coverage at stations, and we’ve committed to install gatelines at additional stations, so all of that drives the need for people. Finally we’ve got a commitment for 100 apprenticeships every year for new people to the industry or for career development for existing employees, so this is an overwhelmingly positive story.’

Trouble: on 15 August a Class 456 derailed at 05.40 as it left platform 11 at Waterloo, adjacent to the ballast train forming the boundary to the work site.
Jamie Squibbs