French freight operator VFLI (now part of SNCF) has ordered 12 Co-Co diesel locomotives, designated type E4001, from Stadler, which will build them at its Spanish factory outside Valencia. The 2,800kW machines will be powered by the same Caterpillar C175 16-cylinder engine used in the UK Class 68 and will meet the latest Euro IIIb emissions standards. The locos will be equipped with European Train Control System (ETCS) and use in both France and Belgium is planned. The new E4001 design will succeed the older 3,178kW E4000 design (which used the EMD710 series engine as also used in the EMD-built Class 66). VFLI will buy three of the new E4001 locos and lease the other nine via Angel Trains.

In addition, VFLI has agreed to buy the Stadler Eurodual prototype loco. This is a powerful 6,000kW six-axle electric loco, which is also fitted with a Caterpillar C175 16-cylinder engine (as used in the UK Class 68). Stadler has tested this loco in several countries including France and is currently building 10 of the design for German freight operator HVLE. 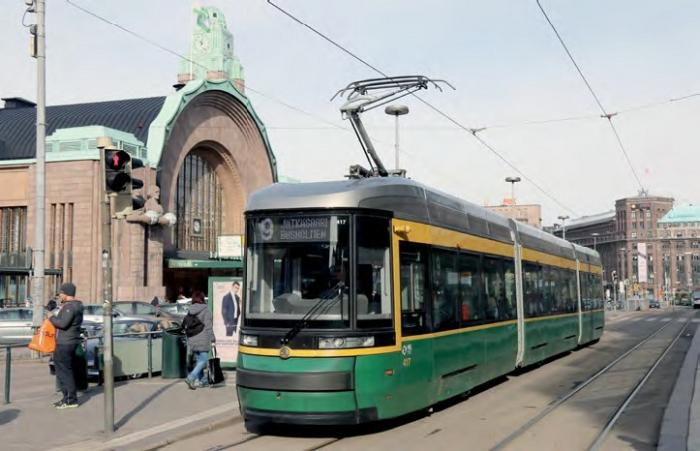 Made in Finland: the Škoda ‘ForCity Smart’ trams for RNV will be based on the ‘ForCity Smart Arctic’ design manufactured by Škoda’s Finnish subsidiary Transtech (which has been wholly owned by the Czech firm since May 2018). One of the new ‘ForCity Smart Arctic’ trams is seen outside Helsinki main railway station on 17 April 2018. Helsinki tram operator HKL has recently ordered a further 10 to add to its fleet of 60.
Keith Fender