Agreements are being implemented for rail franchises following a major fall in passenger demand due to the coronavirus crisis. The news comes as operators across the network introduced reduced timetables from 23 March (p10). 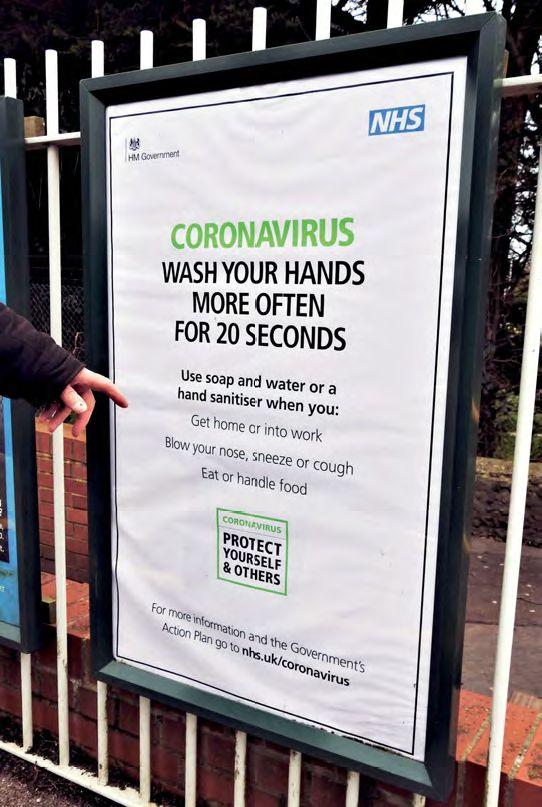 Health warning: during March these posters began to appear on station platforms, this example being on the down platform at Goring-by-Sea station in West Sussex.
John Vaughan

The agreements, backdated to 1 March, have been signed by all operators of franchises let by the Department for Transport under the traditional revenue risk model. Govia Thameslink Railway already operated under a management contract in which DfT bears revenue risk. Go-Ahead, the 65% majority shareholder in Govia, reported on 23 March that an emergency arrangement with new terms removes GTR’s exposure to ancillary revenue such as car parking and to retail commission. Govia’s Southeastern franchise is now operating under a new deal which also comprises a management contract (see story opposite).

The agreements suspend the normal financial mechanisms of franchise agreements, transferring all revenue and cost to the Government. Operators will continue to run services for a pre-determined management fee, which will be set at a maximum of 2% of the cost base of the franchise before the coronavirus pandemic began. The fees are intended to incentivise operators to meet reliability, punctuality and other targets, and Transport Secretary Grant Shapps said the maximum fee attainable ‘will be far less than recent profits earned by train operators’. The Operator of Last Resort, which already operates LNER and Northern, was set to step in should operators not take up the emergency arrangements.

Mr Shapps said the change is ‘not a new model’ but a ‘temporary solution’, despite suggestions the Williams rail review, yet to be published by Government, would recommend a move to concession agreements rather than traditional franchises where operators bear financial risk. The Transport Secretary said the ‘temporary suspension’ of existing financial mechanisms would be for an initial period of six months, with options for further extension or earlier cancellation as agreed. During that time existing responsibilities and liabilities of franchisees will be frozen, with the situation to be reviewed in six months’ time, or sooner if required.

Mr Shapps said the offer provides greater flexibility to operators and the Government to make sure the railway can ‘continue to react quickly to changing circumstances and play its part in serving the national interest’. He said on 23 March there had been a 70% drop in passenger numbers, with ticket sales down by two-thirds from the equivalent date in 2019; by early April the number of passenger journeys was down by 95% year-on-year and footfall at Network Rail managed stations had fallen by 94%.

Several franchises have reported financial difficulties in recent months and have been operating under onerous contract provisions, including South Western Railway and TransPennine Express. ‘Allowing operators to enter insolvency would cause significantly more disruption to passengers and higher costs to the taxpayer’ Mr Shapps said in a written statement to Parliament.

FirstGroup said in a statement on 23 March that revenue had fallen by up to 90% in recent days as Government advice had changed. It welcomed the emergency arrangements introduced by the Government.

Abellio’s Chief Operating Officer Dave Kaye welcomed the Government’s actions and praised the DfT’s speed in putting in place the emergency measures, telling Modern Railways ‘The arrangements are fair and well structured and give stability while removing financial risk’. Mr Kaye added that the measures still place entrepreneurial and commercial thinking at the forefront of operators’ minds.

Some operations are not let as franchises by the Department for Transport. London Overground and the Crossrail concession are let by Transport for London to Arriva and MTR respectively, both already operating under concession arrangements through which TfL bears revenue risk and sets service levels. Merseyrail is also an operating concession, in this case contracted with Merseytravel.

The ScotRail and Caledonian Sleeper franchises are let by the Scottish Government. Transport Scotland confirmed on 9 April it had agreed temporary variations to both franchises for an initial six-month period in the form of Emergency Measures Agreements. Both franchisees will receive increased payments to cover operating costs as necessary because of reduced revenues, and in addition a small management fee will be paid at the end of the variation period, subject to satisfactory performance.

The Transport for Wales franchise is specified and let by the Welsh Government’s TfW subsidiary. On 31 March Minister for Economy and Transport Ken Skates announced a package of support worth up to £40 million over the next few months for the Welsh franchise, which he said would ‘assure the skeleton service we are now operating, and will safeguard the future of rail service operations in Wales and the Borders’. The minister said the Government was working with TfW and operator TfW Rail Services on the details of the mechanism, which he expected ‘to evolve further over the coming weeks’.

The Government’s measures also include allowing passengers to obtain refunds for advance purchase tickets they are unable to use without paying an administration fee. The rail industry’s policy had previously been to remove fees for passengers to amend their travel but had stopped short of offering refunds for advance tickets. Season ticket holders are also able to obtain partial refunds determined by the amount of time remaining on their ticket.