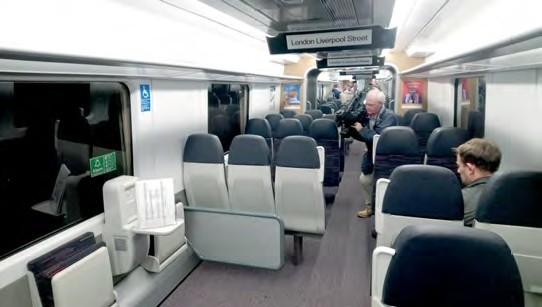 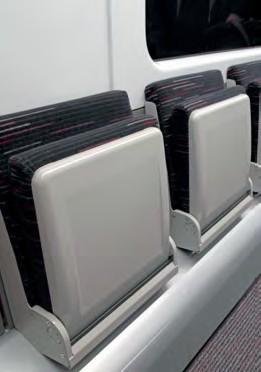 Space for standees: tip-up seats on the side of the Aventra.
Antony Guppy 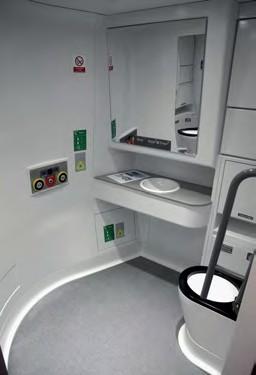 GREATER ANGLIA has unveiled a mock-up of its new Class 720 Aventra EMU, to be built by Bombardier for its suburban routes.

The new trains will offer air conditioning, free Wi-Fi, plug and USB sockets and passenger information systems. The seating will be in a 3+2 configuration and will be cantilevered to the body sides to create a clear floor space underneath. Each five-car unit will be 122m long and will have 544 seats, with 1,146 seats on a 243m-long 10-car unit, meaning the number of seats will increase compared to the equivalent length of train today. Through gangways will be provided, and while the original intention was that the Aventra fleet would be standard class only, GA is still considering the option of providing first class accommodation.

Design freeze on the Aventra fleet is expected in November, with pre-series manufacture due to begin shortly and continue through the first half of 2018. Testing is due to begin in March, with the first five-car unit to be delivered in February 2019; mileage accumulation is likely to take place on the Southend Victoria line and also using some spare paths on the Great Eastern main line, with route proving to be carried out on West Anglia routes. Bombardier intends to set up two adjacent production lines for the ‘720s’, with peak output of between 13 and 15 vehicles a week planned during series production. The 10-car units will be rolled out later, with a target date of having all 111 trains in service by 12 May 2020.

The first units are planned to enter service on the Southend Victoria line, with rollout then moving in an anticlockwise direction across GA’s routes, with the West Anglia line the last to see the new trains. The rollout is dictated by GA having sufficient units which meet accessibility requirements for service into 2020, with the company’s Class 360 and 379 EMUs, the most modern in its current fleet, the last to be replaced. Twenty-seven of its older Class 317 EMUs will also be made compliant with these regulations, providing additional flexibility.

GA has held an online consultation about the design of the trains, which it says attracted over 1,000 responses and has led to a number of changes. The original designs had seats by Fainsa, but this has now been amended to use a different seat by German supplier Kiel, which includes an e-leather headrest; provision of seat-back tables has also followed from the consultation. Other aspects under discussion include the provision of tip-up or perch seats in doorway areas and the layout of the accessible toilet.

The Aventra fleet will be maintained at Ilford depot, with maintenance carried out by Bombardier. To reduce maintenance requirements, the plan is to set up the manufacturer’s Automatic Vehicle Inspection System (AVIS), which scans a train using lasers, at two or three sites away from the main depot; if a train passes an AVIS inspection it will not be required to return to Ilford for maintenance.

The new trains are part of a complete fleet replacement by GA, which has also ordered 20x12-car Class 745 EMUs and 38 Class 755 bi-mode units in three- and four-car formations from Stadler. The Stadler EMUs will work London to Norwich inter-city services and the Stansted Express, with the BMUs operating on non-electrified routes. However, the ‘720s’ will work most of the additional hourly services GA is to introduce between London and Norwich in December 2019, increasing the frequency from two to three trains per hour.

GA says it is making good progress on the rewrite of its timetable, due to be implemented during 2019. This will take advantage of the improved performance characteristics of the company’s new trains, with the only infrastructure improvements required being some power supply enhancements and platform extensions. The company is now finalising with Network Rail a list of platforms to be extended; the use of selective door operation (SDO) on GA’s new fleets means not all affected stations will require this work.