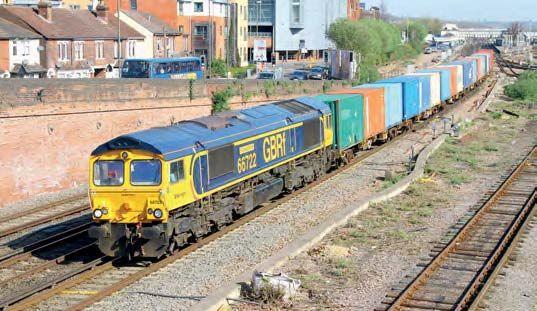 Contract switch: from April 2017, GB Railfreight has taken over Ministry of Defence (MoD) traffic from DB Cargo. Here, No 66722 is seen passing Eastleigh at speed on 3 April 2017 with the first GBRf-hauled service to Marchwood military port at Southampton, working 6O44 from Bicester. Under the former operator, the traffic was centred around Didcot and Eastleigh yards with feeder trips to Ludgershall, Bicester, Kineton and Marchwood as required; it seems GBRf will run direct services between MoD sites.
Steve Stubbs

DB CARGO has renewed its steel contract with Outokumpu as the companies mark 40 years of working together (either them or their predecessors).

The renewal will see three to four services run each week from Sheffield to Immingham and one a week to Liverpool, with each train carrying around 1,300 tonnes of stainless steel. Steel arriving at Immingham will be carried by ship to Gothenburg in Sweden, from where it will be moved by rail across the country to Avesta and Degefors. Steel reaching the Port of Liverpool will be exported to American markets.

British Rail began moving stainless steel on behalf of Outokumpu’s predecessor (then British Steel) in 1977, when the melting shop in Sheffield was first built.

Sonia Hampton, Account Manager Metals at DB Cargo UK, said: ‘We are celebrating 40 years of working with Outokumpu – the equivalent of a ruby wedding anniversary – and we continue to build on the excellent relationship we have with them.

‘DB Cargo UK transports millions of tonnes of finished metals and raw materials across the UK and into Europe. The renewal of this contract reinforces our leading position in the metals sector.’