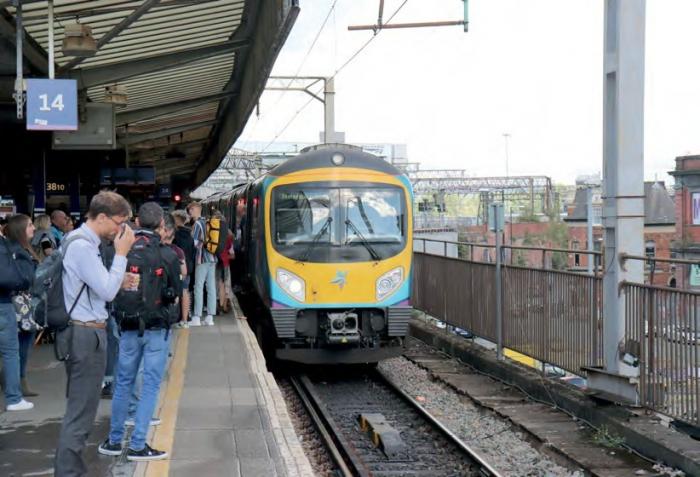 A SOLUTION to capacity problems on the Deansgate corridor through Manchester Piccadilly and Oxford Road needs to be found this autumn, Transport Secretary Chris Grayling has told Modern Railways.

Performance through the corridor is poor on a daily basis, with suggestions the introduction of services from the Ordsall Chord without extra capacity through Oxford Road and Piccadilly has made the line unworkable. Original plans envisaged construction of an extra two tracks with two new platforms at Manchester Piccadilly (numbers 15 and 16), but no decision has yet been taken on whether to go ahead with this. Speaking to Modern Railways,

Mr Grayling said: ‘We’re still moving ahead with plans that are there for improvements in that corridor. But what I’ve done is I’ve asked Andrew Haines, the new Chief Executive of Network Rail, to look at what does make the biggest difference the quickest because at the moment what we’re talking about is a project that means very large amounts of expenditure for little extra capacity.’

Mr Grayling has previously stated ambitions to use digital railway technology to improve the service and reiterated this view, saying: ‘If London can have a 20 or 24 trains an hour railway why can’t Manchester? We’ve also got to tackle the problems right now, particularly in the throat at Piccadilly’.

Both Northern and TransPennine Express had franchise commitments to introduce enhanced services, many of which are likely to be significantly delayed, and at a Rail North committee meeting on 12 October Transport for the North noted options to reduce performance risks are still under consideration. Proposed enhancements at Northern that the operator is struggling to deliver include additional services both on the Castlefield corridor and into Manchester via Stockport, where capacity is at a premium.

Asked how long passengers are going to have to wait for the promised extra capacity, Mr Grayling replied: ‘The difficulty is that I’ve got to wait until the rail engineers work out a way of making it work. We’ve got one plan that’s been progressing through the Transport and Works Act order (the additional platforms), there’s also the exploration over whether digital technology would work better. I don’t mind, I just want it to get better.’ Asked whether he has set a deadline for a decision to be taken, Mr Grayling stated: ‘We need to get it done this autumn, we’re heading into CP6 (Control Period 6) from next April, when things need to happen, and so we need to find a solution in CP5.’

Discussing planned service improvements going forward, Northern Managing Director David Brown told Modern Railways: ‘We are looking at timetable improvements for December and May and are looking at whether all the trains are the right ones to go through, and whether the right performance framework is in place. We know what we would like to do in May but we’ve got to make sure that Network Rail can deliver it reliably, not just on the Deansgate corridor but the adjoining sections. Then we really need to look at regulation through the whole corridor.’

Discussing the Deansgate corridor specifically, Mr Brown told Modern Railways ‘If it’s not infrastructure then we need to find a solution to be able to run reliably through that corridor and the alignments nearby. It’s still not working optimally and if you have problems elsewhere on the network it makes it more complicated to get through there because it needs to operate in a robust manner. We’re trying to improve passenger flows through new customer information screens over platforms 13 and 14 (at Manchester Piccadilly) but the main need is to get the trains through in a regular way.’

NO REPEAT OF MAY CHAOS

Asked about planning for future timetable changes, Chris Grayling told Modern Railways: ‘There isn’t going to be another timetable change like this in December. The planning that’s going into timetable changes in the future is much more exhaustive. We’ve got people at more senior levels involved right across the industry and we’ve got to make sure it can’t happen again. What happened in the North was, frustratingly, an investment project that went wrong; the electrification between Preston and Manchester that was delayed and this disrupted the timetable launch. We’ve got to have earlier warning signals if that’s going to happen and be able to act more quickly. At the end everybody thought it would be alright on the night and it wasn’t, and the passengers suffered. I’m really sorry for that.’

Transport for the North noted in papers for the October meeting that the Rail North Partnership is carrying out a review of timetable planning, peak paths and rolling stock provision for train plans already contracted for the Northern and TransPennine Express franchises; all services on the TransPennine route between Liverpool / Manchester Airport and east coast destinations; and possession plans and other train timetable increments required to deliver benefits of the TransPennine Route Upgrade. TfN notes that TPE’s December 2019 timetable is expected to involve the introduction of new rolling stock and the extension of Liverpool – Newcastle services to Edinburgh. However,

TfN notes that whilst TPE has consulted on the implementation of performance-related timetable changes prior to December 2019 ‘The permanent implementation of split services and longer turnaround times would require extra rolling stock and/or changes to the capacity metrics in the franchise agreement’. It is therefore beginning to work with TPE to explore the timetable options available from December 2019, to improve performance and ensure adequate capacity is provided.

With regards to Northern, TfN notes that December 2019 was expected to see a number of new services, particularly the new Northern Connect routes, and that the industry is working through the issues that are developing with regard to introducing these additional trains. Tony Miles