Who will save the world? Could it be the mighty South Western Railway, which has announced it has cut its CO2 by 33% in just one year? What’s that smell? 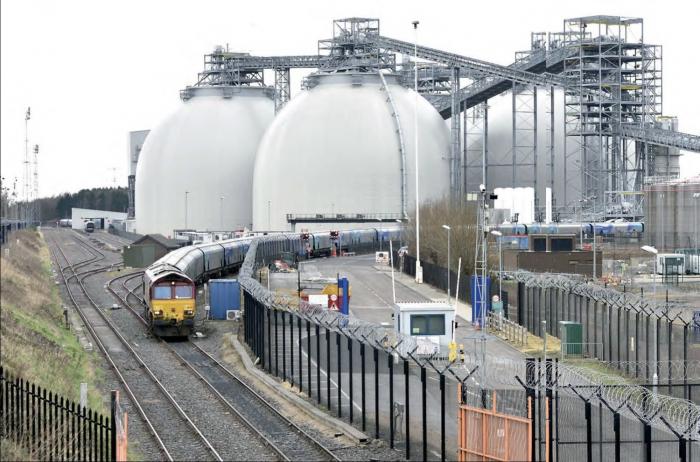 The feed-in from the grid is key: this is Drax on 8 March 2016, with No 66122 leaving for Hull with an empty biomass train. Use of coal for power generation has fallen sharply in recent years. Brian Perryman

Inviting those with time on their hands to a jolly for the ‘Riding Sunbeams’ lineside solar power generation project (p15, last month), South Western Railway included the following sentence in its press release:

‘The rail industry plays an important role in reducing carbon emissions. SWR has reduced its emissions by 33% over the last 12 months and are continuing to install renewables, and other technologies, to cut our carbon emissions by 60% overall within the next five years’.

Fantastic. What were we worrying about? If one train company, which is almost all electrically operated, can achieve a cut of a suspiciously round third to its emissions, to be followed by a further third in five years, then what have the others been playing at? Hmmm. I think that smell is bovine emissions, and my rule of writing is ‘never believe the press release’. I say this because I occasionally wrote them.

I took this up with the press office, eventually, since the link for enquiries in the e-mail didn’t work. The reply was as follows: ‘The carbon reduction is against SWR’s baseline, and is a result of more efficient trains, the introduction of regenerative braking, innovative technologies and cleaner energy – the energy for the EC4T is lower in carbon intensity as the energy mix contains a higher percentage of low carbon energy.’ The last bit is the important part – the energy mix coming from the grid, which SWR has as much control over as the weather. But let’s do the easy bits first, since both statements make it clear that this is SWR’s doing, so for the good of the planet we need to find out what’s going on.

There is obviously the fine project to re-traction all the Class 455 fleet, one of my last projects at Porterbrook, which could offer up to a 15% energy saving on a really good day. The last unit came out on 15 January 2018, so before ‘the last year’ in question and, anyway, the trains will soon be scrapped by SWR in favour of new Aventras. The ‘455’ project, although not applicable to the last year, had a potential real energy saving of up to 15% (mainly from regenerative braking) on that 28% of the SWR fleet, so possibly saving 4% over SWR. Part of the justification for the conversion was to make depot space available for more trains to run more services, which is of course a good thing – but uses more power.

The new Aventras will be built of aluminium, which is a very energy-demanding material and is usually manufactured abroad – but we shouldn’t worry about this because of course carbon emissions in other parts of the planet don’t count. Aluminium manufacture accounts for about 1% of world CO2 emissions, partly because it takes place in countries that burn lots of coal but don’t count. It is then imported to countries that do count, and could have made it producing less CO2 – but are too expensive.

Manufacturing the Aventras for SWR will produce around 500,000 tonnes of CO2, which is 18% of the annual emissions from all the electric trains in the UK for one year. But it doesn’t count – so that’s OK.

One technology that was mentioned was the use of fuel additives in SWR’s diesel fleet.

An Engineering Director of another company refers to this as ‘snake oil’, and indeed my own trials at Cardiff showed no measurable difference. Obviously if an additive reduced fuel burn it would be in great demand in the automotive industry, but it isn’t, because it doesn’t.

Similarly, the project which started this train of thought in my opening line can’t work as we all know there is not enough sun in the UK to power the railway. The Riding Sunbeams project will prove that given a big enough field of solar panels, it can power a train – but it is basically irrelevant.

You might wonder why such projects flourish. It is because of three factors: n franchise commitments to test alternative fuel sources; n research money with nothing better to do; n academics who live on these benefits.

There might be a few percentage points saving in carbon emissions by using Connected Driver Advisory Systems (C-DAS) on Class 159s, but taking out four unit diagrams due to engine failures will have made more of a saving – so it is not possible for me to attribute this exactly. Diesel fuel savings of about 10% would result from converting the ‘159s’ to mechanical transmission, but far better would be extending the third rail from Basingstoke to Salisbury, although that sort of real change is not SWR’s preferred option, since the company can get a 33% reduction anyway. Apparently.

The truth is that any validity in the SWR claim rests with where the power came from: the national grid. You can play games with suppliers to the grid, but if you sign up one of these, that just means someone else is using the less green electricity more. What matters is the whole UK energy mix, averaged out over the year. Official figures put the reduction in CO2 emissions as 9.9% in the last year, which is incredibly impressive, but not 33%.

A later discussion with Managing Director Andy Mellors revealed that SWR’s baseline was actually 2015-16, which helps – since grid emissions dropped 18.7% in the following year, and it includes the ‘455’ conversion, giving a possible total of 22.7%. Mr Mellors and his press office both stressed that the figures are independently audited by the Department for Transport, clearly an organisation which would never want to make things look better than they really are.

Working from the baseline year to today (two years) gets close enough to the 33%, but most of this has happened irrespective of the actions of SWR. Unless you count train cancellations, but I doubt they would want to advertise that. Crediting ‘innovative technologies’ for the reduction is a bit rich when the only real difference came from regenerative braking, first applied on the main line started by the original LNER on the Woodhead route in 1936 and finished by British Railways.

IS IT JUST SWR?

I naturally assumed that the others would be at it too. So I slogged through the environmental policies of all the train operating companies, and guess what? They’re not. Special commendations go to Northern, which correctly identifies modal transfer as the target, and West Midlands Trains, which targets a 49% reduction per vehicle kilometre, but says 11% of this will be through WMT’s actions.

Embedded or embodied carbon (that produced by making things) never gets a mention, partly because it is nearly all outside-the-UK figures, and partly because it works against the craze for new trains. The Department for Transport always shows the falling average age of trains as a success, on the debatable assumption that new trains are better than old ones. From a climate point of view, making trains last longer is a good thing.

When I was trying to market Class 458s against new trains I worked out that it takes even a very efficient new train some years to make back the carbon produced by its own manufacture, but this cuts no ice as only UK figures count. Perhaps SWR is offsetting by paying for energy saving across the world? If the company is it didn’t say so, and the very principle always assumes that the offsetting action would not have occurred anyway, which is a whole new debate which you will be pleased to know I don’t have space for.

Briefly looking at Merseyrail, which has got a good life out of its existing trains, it targets carbon reductions at stations (down 19% since 2013), which is nothing compared to traction carbon emission. That is going up with the new trains, but this is a good thing. Let me explain.

In truth, it doesn’t really matter what reduction train companies make in their CO2 emissions, even though they all have a ‘we must all do our bit’ type target. The only way railways can make a real impression on CO2 emissions is by modal transfer from more polluting modes, principally cars and planes. To do this they have to increase their power consumption, which may, or may not, still give a reduction in CO2, depending on the good work done by the electricity supply industry. They also have to attract this business by having trains that are nicer to travel in.

But it is important that train operators be honest and don’t pretend they are responsible for savings when all they are doing is basking in reflected glory.

If this goes unchallenged, we won’t know where we are: we have to have dependable figures. It’s OK, no need to thank me.

Already the decarbonisation of the grid has widened the gulf between diesel and electric trains in CO2 production. If targets are achieved, we could be looking at almost zero-carbon electricity by 2025. That is about when we could expect to have all our main lines electrified if sanity broke out in the next few months.

Diesel trains always had worse emission figures than electric, but add in a decarbonised grid and awareness of particulate pollution from diesel – and they will seem much worse. Grid demand will be higher to feed electric cars, yet we talk about hydrogen taking over, which consumes three times the power of a copper wire. Make Electrification Great Again. Pan down.