DEVOLUTION TO GO FASTER AND FURTHER

NETWORK RAIL must become a customer-focused organisation, with delivery of the timetable front and centre, its Chief Executive Andrew Haines has said.

In a briefing to journalists on 1 March, Mr Haines said the key for NR was to change its mindset rather than its structure. However, he also said the organisation required fundamental change and tinkering was not an option. Mr Haines was discussing the restructuring proposed by the outcome of his 100-day review of the organisation. The restructuring is targeted at creating the opportunity for more devolved decision-making, something Mr Haines said he had identified as being his strong preference prior to taking on the role. Mr Haines said devolution would ensure accountability and authority for decisions was held at Route level, whereas currently Route Managing Directors do not have authority to make key decisions.

Having Managing Directors on the executive would create ownership at the top table, Mr Haines said.

As explained last month (p10), the proposed restructuring will see an increase in the number of Routes to 13, supported from above by five overarching Regions (Eastern, London North Western, Scotland, Southern, and Wales and Western). At the same time key functions are to be devolved to Route level, with some organisations such as Infrastructure Projects abolished and others split up. Mr Haines said there would be no increase in headcount as a result of the changes, and over time there would in fact be fewer management roles in NR. He also said the number of Routes could grow, with for example a dedicated Chiltern Route a possibility. Asked about the East Coast, earmarked as a dedicated Route, Mr Haines said NR was still working through options and that establishing a regional partnership with the operator would be ‘tricky but not impossible’.

Routes will be responsible for running the railway on a day-to-day basis, for improving performance and for relationships with operators. The Regions will be ‘thin but sufficient’ and will support the Routes and absorb the devolved functions, with responsibility for relationships with stakeholders and funders. Mr Haines said he aimed to introduce cabinet responsibility for decision-making, promoting collective agreement on such matters as standards. Functions to be devolved are IP, the Safety Technical and Engineering function, Group Digital Railway and elements of the System Operator function, with this process running to the end of 2020. Route Services will be retained as a central function, and a new Network Services directorate will incorporate the ‘virtual Route’ for freight and national passenger operators along with Digital Railway and national programmes. Mr Haines said the message received from operators served by the virtual Route is that they would prefer this to be at the centre of NR.

Asked about digital railway, Mr Haines said the sponsorship for schemes would be within Network Services but the articulation of outcomes would be devolved, with Regions and Routes determining the desired passenger and freight outputs. He noted the East Coast main line project as an example of this, which is being led by LNE Route MD Rob McIntosh and is seeking to deliver European Train Control System (ETCS) and Traffic Management on the line. He said the real test of the East Coast pilot would be whether it delivered affordability, noting NR faces a massive signalling renewals challenge over the coming 15 years, with funding not sufficient for the required renewals at current cost levels.

On timetabling, Mr Haines said the change in December 2019 will be the first in two years where the level of changes is not constrained by capacity in NR’s System Operator function at Milton Keynes, a result of the increased head count in the train planning team. He highlighted trials involving operators having direct input into train planning, with this year to be used to gather evidence and a future direction to be set out in 2020.

In personnel terms, five Regional managing directors will be appointed, along with a Network Services director, Technical Authority director and National Transformation Programme director, with the appointments expected to come into effect in June. Infrastructure Projects director Francis Paonessa is leaving NR, and Group Digital Railway director David Waboso has now retired from the role, with Stuart Calvert leading the DR function on a temporary basis. Route leadership structures will be defined at a regional level in future.

On safety, Mr Haines said there was still work to do regarding the outcomes in NR’s scorecard, noting the ‘absurd’ safe work packs given to staff working on a possession, which he said would be rationalised. 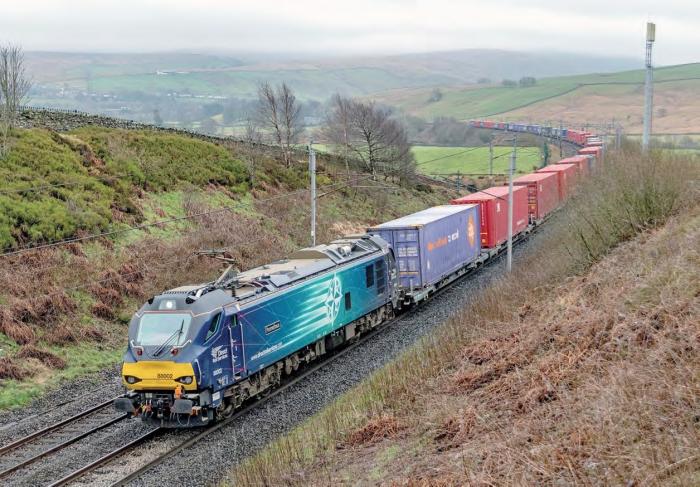 Freight: covered by the ‘virtual’ Route. This is No 88002 at Greenholme on 8 March 2019 with a container train.
John Hales