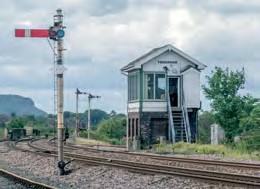 Frodsham signal box: at the south end of the Halton Curve. Merseytravel

NETWORK RAIL completed the final upgrade works on the Halton Curve in Cheshire over the late May bank holiday weekend.

The work on the 1.5-mile connection paves the way for a new hourly service between Liverpool and Chester to be introduced in December, operated by new Wales and Borders franchisee KeolisAmey, with the ambition of later extending the service further into North Wales.

As part of the work the Frodsham control area has been resignalled and the signal box houses a modern signalling panel. At the other end of the curve, signalling control has transferred to the Manchester Rail Operating Centre (ROC). Prior to the work the curve, which connects the Chester to Warrington and Liverpool to Crewe lines, could only be used in one direction and has been served by only a weekly passenger train in the summer months.

The £18.75 million project has been funded through the Government’s Local Growth Fund and the Liverpool City Region Combined Authority, with Merseytravel saying the work has been completed on time and on budget.