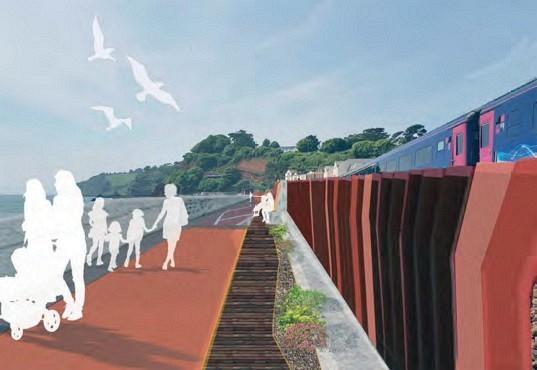 NETWORK RAIL has made a planning submission to Teignbridge District Council for a new, higher sea wall along the Marine Parade stretch at Dawlish.

NR says the design will prevent stormy conditions from damaging the railway and will be future-proofed to protect the railway and the town, taking into account predicted rising sea levels. It follows work between NR and contractor Arup to develop solutions to the vulnerability of the railway along the South Devon coast. Network Rail has submitted the plans for ‘prior approval’ under permitted development rights, with the council able to consult formally the local community on the proposed designs.

The likely solution involves construction of a new precast concrete sea wall defence in front of the existing one along the 360-metre stretch. The new sea wall, which will have a 120-year design life, will be up to 2.5 metres taller than the existing one and will be offset by approximately one metre from the alignment of the existing sea wall to provide a wider fourmetre public walkway. A 1.1-metre high precast recurve along the top of the sea wall will be designed to reduce wave overtopping onto the railway and promenade and is predicted to stop over 90% of the existing water reaching the railway, as well as helping prevent flooding of Marine Parade.

BARGE ON THE BEACH

Construction will use precast elements to reduce the on-site impact. Materials will be delivered using marine plant and construction undertaken from a moveable jack-up barge on the beach. Main works have been programmed to take place 24 hours a day, seven days a week to make use of tidal windows; it is expected each window will permit 4½ hours of work, plus half an hour at each end for mobilisation and demobilisation and a further half-hour as contingency. Work will not take place during the busy school summer holiday season.

Studies carried out by NR have suggested that maintaining the current railway route via Dawlish is the most feasible and cost-effective solution, with some commentators calling for restoration of the route between Exeter and Plymouth via Okehampton and Tavistock or for a new inland route to be built. NR’s studies subsequently identified areas needing most urgent attention, after which the Government invested £15 million for detailed marine and geological studies to be carried out. BAM Nuttall has also been appointed to carry out repairs to four breakwaters at Boat Cove, Coastguards Point, Colonnade Underpass and Langstone Rock, which were identified as being in a poor state of repair, and this work began in November.

The section of the sea wall between Dawlish station and Kennaway Tunnel along Marine Parade is one of three priority areas identified by NR in its work, the others being the cliffs between Parsons Tunnel and Teignmouth and the cliff area to the east of Parsons Tunnel. The Marine Parade scheme has been identified as a higher priority which could be delivered much sooner than the others.

Development and design work continues on the remaining schemes, with single option design likely to conclude in the spring. NR’s submission to the council reports that for the area east of Parsons Tunnel the likely solution to protect the railway from falling rocks and cliff failures is ‘Parsons Tunnel North Extension’, comprising a combination of safety netting on the cliff and a rockfall shelter to extend the previously installed tunnel extension. For the section west of Parsons Tunnel towards Teignmouth the favoured solution is delivering a new railway alignment with a new sea wall and reprofiling the cliff; here the greater risk is from cliff failure rather than damage from the sea. This latter project could not take place under permitted development rights and would require a Transport and Works Act Order, with NR targeting submission in 2020