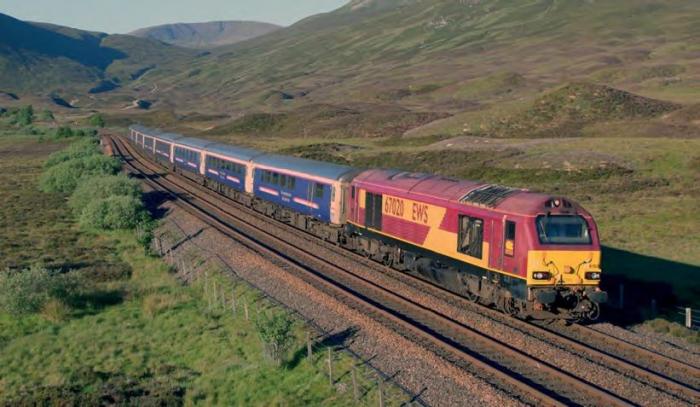 Mk 3s soldier on: loco No 67020 at Balsporran Cottages near Dalwhinnie on the Highland main line with the down Sleeper for Inverness on 28 June 2019. When the Mk 5s are introduced Class 73s will take over all haulage of the Sleepers north of Edinburgh.
Jamie Squibbs

CALEDONIAN SLEEPER has further delayed the launch of its new CAF-built Mk 5 carriages on its Highlander service from London to Aberdeen, Inverness and Fort William. The operator launched the new carriages on the Lowlander service to Edinburgh and Glasgow on 28 April 2019 but has since faced a number of issues including a set of carriages that had to be withdrawn due to wheel flats, leading to a series of cancellations. The operator had already elected to delay the Highlander launch with the new stock until 7 July, and now says the new carriages will probably be introduced in September.

CS says the delay allowed the latest set of eight new carriages, which were due to be accepted into service in late June, to be diverted to support the Lowlander and improve the resilience and reliability of that service. It adds that the delay will also allow CAF to ‘fulfil their responsibilities and complete the work required on the remaining new carriages to ensure that they can be accepted into service for the Highland route’.

A Transport Scotland spokesperson described the latest delay as ‘quite simply unacceptable’, adding ‘While the Caledonian Sleeper team are working to correct train faults, the manufacturer CAF’s inability to supply sufficient suitable trains leaves no other option than for service entry to be postponed. The Highlander service will continue to run with existing trains until this is resolved.’

Caledonian Sleeper operator Serco is procuring 75 Mk 5 coaches from CAF, replacing Mk 2 and Mk 3 vehicles. Meanwhile, Brush Traction has completed the £2 million refurbishment of Class 92 loco No 92006, which will be used on the Caledonian Sleeper service by GB Railfreight. The loco had been stored in France since 2006 but has been overhauled and reinstated by Brush at Loughborough. The ‘92’ has been fitted with Dellner couplings to haul the Mk 5 carriages, along with additional safety measures, improved communication equipment and power upgrades. The ‘92’ will undergo testing before entering traffic.

GBRf has the contract to provide traction and drivers for Caledonian Sleeper, with Class 92s for the electrified stretches between London and the Scottish central belt and Class 73/9s for non-electrified portions of the Highlander service.

Preparing for Mk 5s: in the week beginning 23 June 2019, eight new Mk 5 Caledonian sleeper coaches visited Inverness and Aberdeen for staff training purposes. Here No 73966 leads No 73969 as they climb out of Stirling at Bannockburn on their way back south to Polmadie on 28 June.
Ian Lothian