How Portishead could look: visual of the terminus.

NORTH SOMERSET District Council is consulting on plans to reopen the Portishead branch line near Bristol. The consultation is part of the process to apply for a development consent order from the Secretary of State for Transport.

The scheme forms part of Phase 1 of MetroWest, which aims to deliver improved local services in the Bristol area. The Portishead element requires upgrading of the 9km section of the existing Portbury freight line between Parson Street and Pill and reinstatement of the disused 5km section thence to Portishead. Two new stations would be provided at Portishead and Pill.

The original intention was to provide the infrastructure for a half-hourly service from Portishead to Bristol starting in May 2019. However, a significantly higher than expected cost estimate at Network Rail’s GRIP3 (option selection) stage has led to the scheme being scaled back, with the aim now being to offer an hourly service with a slightly slower journey time which could start in December 2021. This will now form a second stage of Phase 1 of MetroWest, following on from improvements on the Severn Beach and Bath to Bristol lines, where frequencies are due to be increased in 2020.

The scaled-back scheme reduces the scope of work required on the Portbury line, where the current linespeed of 30mph would not be raised to 50mph as originally planned.

Upgrades would be required to signalling and lineside equipment and some work to bridges, tunnels, calverts and retaining walls would also be needed. The reduced scheme also alleviates a potential issue with the level crossing at Ashton Vale, where the half-hourly service would have caused the barriers to be down for such lengthy periods as to require an alternative crossing to be provided.

A report to the West of England Joint Committee meeting on 30 October explained work is still ongoing to provide a revised cost estimate for the staged MetroWest scheme, with Mott MacDonald engaged to assist with this and the outcome due to be presented in December. While costs are ‘reducing considerably for the revised scheme’, the report says there is still a funding shortfall, with an application likely to be made to the Department for Transport’s Large Local Major Transport Scheme Fund to cover this. The next round of bidding for the fund is in December, with a decision on whether the application is successful expected in April/May 2018, ahead of the proposed submission of the DCO for the Portishead line in June 2018.

The aim is that a decision on the DCO application would be received in autumn 2019, with construction work starting in spring 2020 and taking around 18 months. It is envisaged the existing Portbury freight line would be closed for four weeks in August 2020 and August 2021 to carry out some of the more extensive works, including construction of the new station at Pill.

While an hourly service comprising 18 trains per day is envisaged, there is the possibility of running extra trains at peak periods so 20 trains per day could be provided; the journey time from Portishead to Bristol is estimated to be 23 minutes. Services would be operated by the Great Western franchisee and are expected to use three-car Class 165/166 Turbo DMUs.

Delivery of the first stage of MetroWest Phase 1, with increased frequencies on the Severn Beach and Bath lines, is still planned for 2020. Phase 2 of MetroWest involves reopening the Henbury line with new stations at North Filton and Henbury, along with provision of a half-hourly service to Yate and a new station at Ashley Down on the Filton Bank. No major design issues or funding pressures have emerged on this scheme to date, with opening planned for 2021; a GRIP3 outline design report is expected in early autumn 2018. 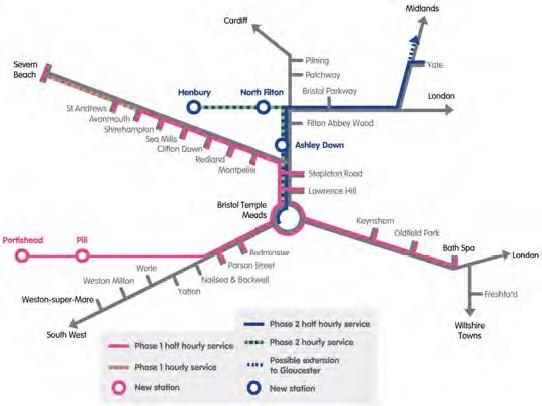 Map of the MetroWest scheme as originally envisaged. An hourly service is now proposed for the Portishead line.